Have an issue with Homing setup on Y axis

I’ve tried looking at past posts and I’m still unable to resolve the issue. I’ve checked all of the wire connections and have even tried adjusting the aluminum spacer slightly backwards and forward to see if that would help. It still makes a grinding noise when trying to set it up.

I don’t think it’s a wiring issue as when I slightly touch the homing switch so that it depresses, that seems to resolve the issue.

However, how do I fix it so that it will work on its own? 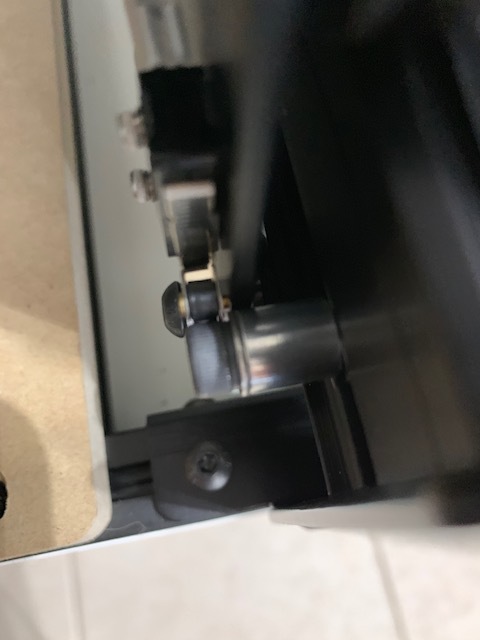 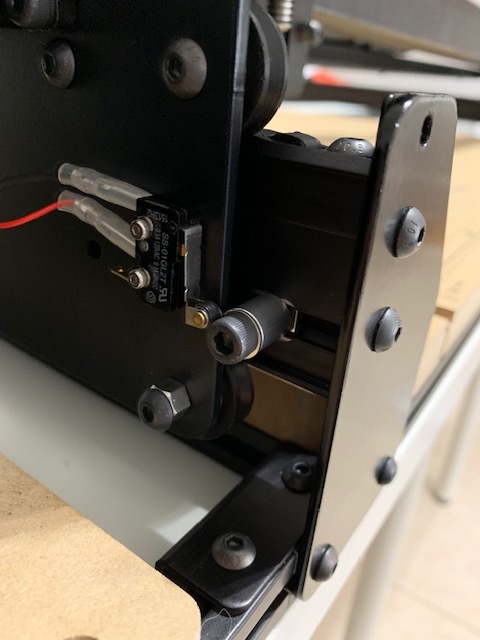 it appears your switches matter too far back on the white plate. Maybe remove the top mounting screw and tip switch forward so it could be engaged when you reach the limit.

Are you saying that the limit switch is not being triggered prior to the Y-Carriage running into the stop?

In the event that is the case then you can bend the lever arm of the limit switch forward at the indention closest to the end where it is connected. Be careful not to bend it at the 90° where it is connected to the body of the switch; just right where the little indention is where the switch is actually contacted. Doing this will push the end of the lever further forward some (depending on how far you bend the lever arm obviously).

This is not the same switch, but you get the idea I’m sure; you make one leg of the triangle longer. This will obviously shorten the other side because the hypotenuse length (the lever arm) is fixed and thus the roller will contact the stop at a higher point, but it looks like you have plenty of room to work with from the image. 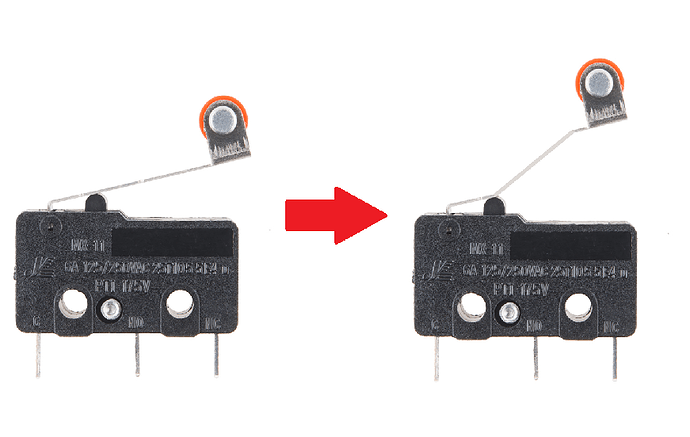 Excuse me if I have completely misunderstood the entire situation…

Yes that is an option but was reluctant to give that direction for fear that Jessica might break the switch.

Thank you for all of the helpful suggestions! I ended up using a glue dot and attached that to the bolt so that the homing switch would hit where it was supposed to hit without risking breaking the switch.

Completely off topic from my original issue, but then this happened when I was trying to do my test cut. Did I over tighten? 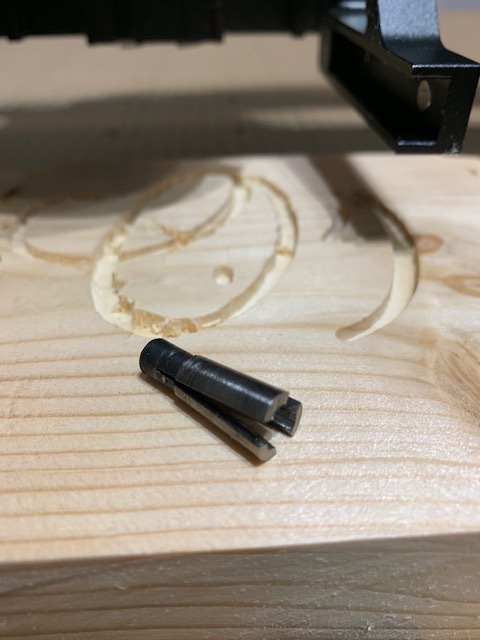 How deep did you insert that collet adapter?
Either it wasnt deep enough or not tight enough so it worked itself out during carve?

To be honest, I’m not sure and it’s very likely I didn’t have it in as deep as it should have required. Are there any videos that discusses the proper way to load the collet and bit? Or even what bit should be used for the material being cut? I feel like I’m just guessing at how to use the machine.

The adapter is not intended to stick out at all, but sit flush with the 1/4" collet.
If the shaft is deep enough the reducer may be too deep.

Do you have a digital caliper? What is the actual diameter of the adapter?
Just wanting to rule out the chance of you having a 6mm collet adapter as 1/4" is 6.375mm.

As to the “guesswork” question - we have all been there, the best approach is to ask for specifics on a project and take it from there - otherwise it will be too general / broad.
Like “I have this project/material and this and that bit - what numbers do you use?” kinda thing.

Yes, I definitely don’t think it was flush with the 1/4" collet. I have the adapter that came directly from Inventables. And then I assume that my bit collar needs to be flush the bottom of the adapter? I’m not quite sure I understand this though…

If the shaft is deep enough the reducer may be too deep.

Disregard the too deep thing as it don’t apply if the adapter wasn’t seated flush with the 1/4". You do not want the collet adapter to stick out from the main collet. (nor too deep, just flush)