So Ive gone through the machine and i could use some pointers with my issues.

Z axis:
When I am cutting there is a depth difference from the left to right side. Ive adjusted the V wheels and have made sure the bed is level.

Y Axis- it seems the Left side is not cutting square and is cutting higher on one side. In the picture bellow I have line the bottom of the picture with the board so you can see how the cut is rising.

Ive also uploaded some images of the level board.

Any help would be really appreciated! 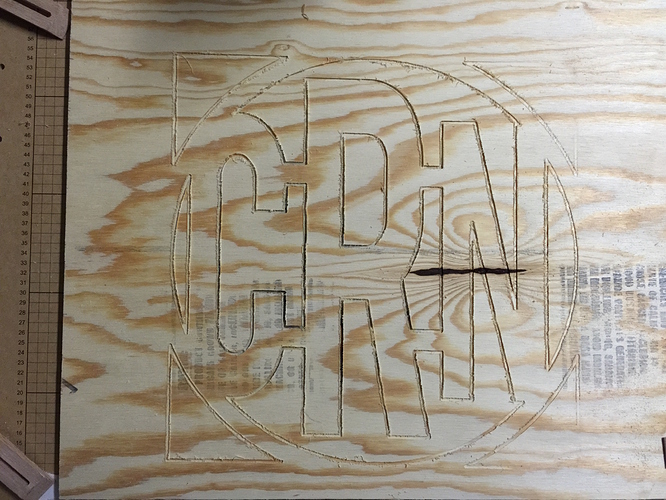 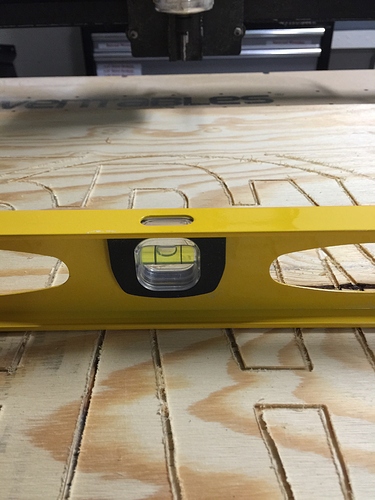 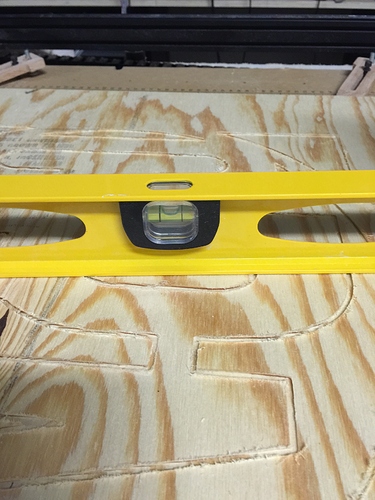 Dan - have you made sure the bed is level with respect to the maker slides? Being level overall all does not necessarily mean the bed is level relative to the X or Y axis. Easiest way to check is to lower the spindle to just above the bed in the lower left corner and move the spindle to the lower right corner, then upper right corner, then upper left corner. If the distance between the bit and the bed is the same at all locations then the issue is not related to the bed height. I know my bed is lower in the back right corner than the front left corner. One of the many things on my todo list for christmas break.

I will check that.

Whats the best way to fix that? Just shim it?

Hi Dan - I would use shims but some people “face” the waste board. I have not had time to investigate the root cause. If waste board is a uniformed thickness, then the height differences are due to mechanical variances or assembly issues. Again, in my case, I’m not sure which right now.

You could shim it, but then it leaves some potential slop where the wasteboard could flex. The best method to have a solid, stiff wasteboard would be to leave it attached firmly to the base and level it with a cutter.

Rather than leveling the Inventables wasteboard, you could put piece of 1/2" MDF to put on top and cut it level with a big wasteboard cutter (3/4" flat cutting bit). You can level it multiple times to remove marks from previous jobs, and it will also give you a nice square corner to push your stock against if you take it down .050" or so.

Hey Robert thank you for the suggestion. I just tried what you suggested and I’m still not getting the board flat

Let me know if you have any other suggestions.

I attached a picture 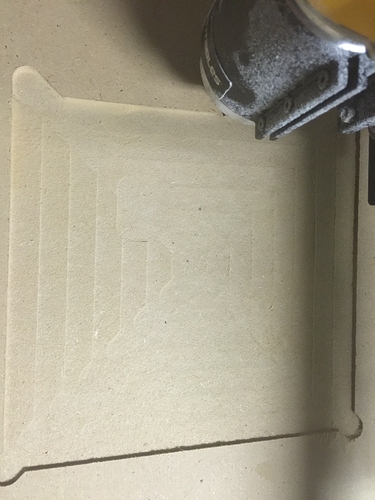 The way I figure that is because it looks like the bit is cutting deeper on the front side than the back, creating a sort of ramp or sawtooth wave (as in the electronic sine wave style sawtooth). I would suggest adding a couple small strips of business card paper just above the bolts at the bottom of the Z axis makerslide, between the makerslide and the carriage, and cutting a smaller wide pocket .010" deep in your existing wasteboard pocket. As long as you get 2-3 good passes back and forth, you can dial it in with more or less shim stock. After you add/remove a shim, re-cut the small wide pocket a couple inches up so you’re using a new section of the big pocket.

Once you get it as perfect as you want it, re-cut the entire wasteboard pocket another .010" deeper to remove the existing mill marks. When you get rid of the sawtooth cuts, you’ll know it’s exactly perpendicular to the wasteboard.

I had to do the same type of thing when I installed the 611, except I had to shim the top out. You can see that I had to use quite a bit of shim stock up at the top (yellow strips of business card), but a single shim strip at the bottom will make a lot more of a difference than a strip at the top. 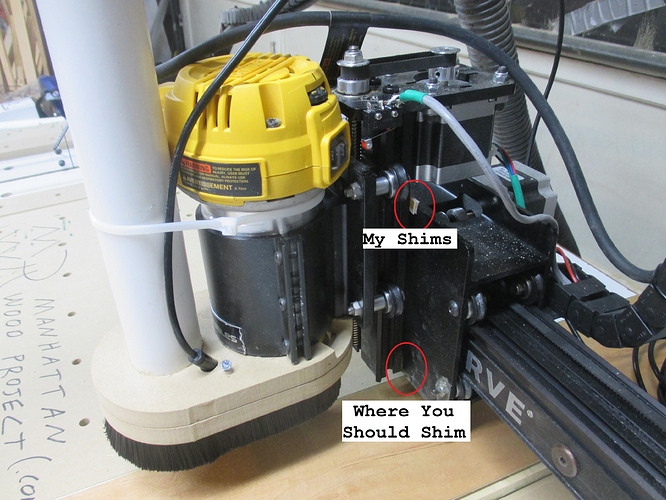 This is assuming I was looking at your picture correctly, and the “vertical” part of the sawtooth was facing the back of the machine. If it’s facing the front, then you will need to shim at the top like I did.

Robert thank you for all of that information!

I have to go out and take a look at it. Never thought that I would need to shim that!

I uploaded the picture from my phone so i didn’t check the way it was facing. But the left side of the Picture is the Front of the X carve and the right side is the back.

Thank you again for all your help. I really appreciate it!

Good to know, that’s what I was thinking. It looks to me like the vertical part is facing the right (back), but it’s hard to tell for sure.

When you loosen up the bolts to shim it, try to keep the spindle straight up and down, don’t pivot it to the right or left. You could always correct without shims using the same logic (if vertical of sawtooth is facing left, rotate top to left) after you correct the front-to-back offset, but no need to have to take the time to correct an easy to avoid error.

Hey Robert is that small line going into your dust shield on the bottom of your router a camera? How do you like that setup? I want to do do the same thing because it’s hard to see when all that stuff Is on there

Yes it is! I’m still trying to figure out how to make it mesh with my video software since it comes with its own small program, but it’s been interesting watching some of the cuts. I just did a small job for a friend, and he had his phone out taking pictures and video of my laptop screen showing the cuts.

I don’t know how good it is compared to other endoscopes, but it’s darn good for $24. http://smile.amazon.com/gp/product/B00JERRES6?psc=1&redirect=true&ref_=oh_aui_detailpage_o03_s02

Robert thats a cool idea! if it doesn’t save within the program look into a screen recorder software. This way you can record the feed on your screen and it should output to a standard video format. (.mp4 or .mov) That will also make the quality better then having a camera record your screen.

I just have codec issues that randomly pop up, sometimes an MP3 just isn’t MP3 enough to work and so on. I’ve got a screen recorder, but I really need a new computer that can record more than 5 seconds without skipping due to 100% CPU use. Who knows, maybe that’ll be an option this year.

Does this appear to be the same issue? 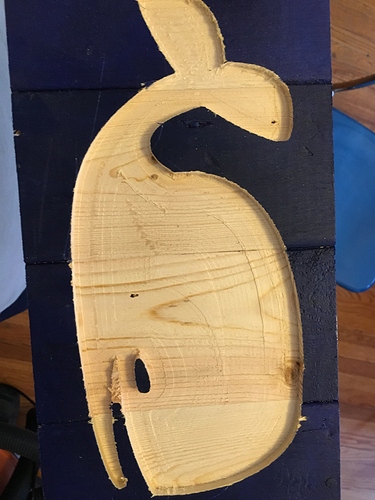 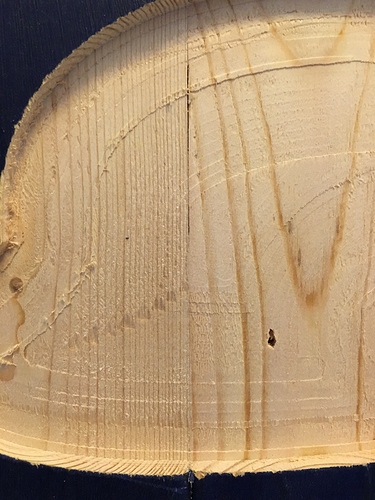 It doesn’t look like a squareness issue, more of a variable depth of cut. Could be caused by the board being pulled up by an upcut bit if the workpiece is large and not clamped adequately in the middle, or uneven cutting due to excessive cut depth and plunge rate.

Try taking the plunge rate down by 1/3, and make sure your final pass is only .010" or so. The thin final pass will help to clean up the bottom. Also, try using a straight or downcut bit and see if that makes any difference.