This is an important heads up for Suckit users who have limit switches installed on their X-Carve.

I’ve got the limit switches installed on my X-Carve and had previously set those switches for the max possible work area (the X was as far to the left as possible and the Y as far forward as possible). My previous dust boot didn’t interfere with this. The Suckit is wider and longer, so the first time I powered up with it installed and homed the machine the Suckit crashed into the front Y axis support plate. 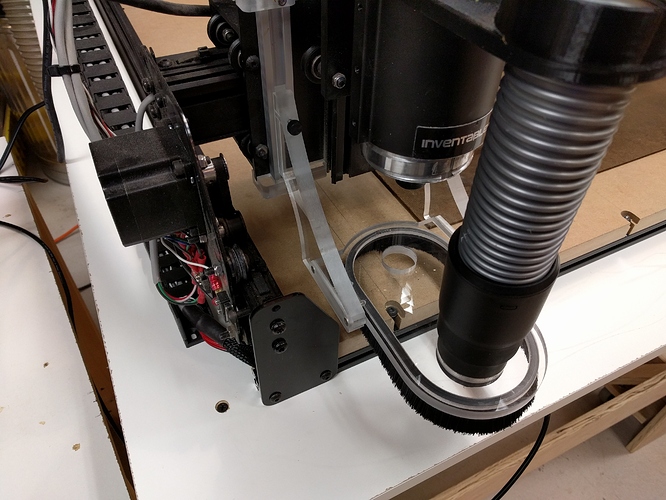 So before you power up with the Suckit for the first time, if you have the limit switches installed make sure you check that you don’t have to adjust the X/Y limit switches to prevent a collision on homing! I moved my limit stops as a short term solution, but may end up getting a longer piece of 20x20 for the front and flipping the Y support plates so they angle outwards. Since I’m also contemplating eliminating the 20x20 frame over the waste board and bolting it directly to my torsion box workbench I may end up with a different solution.

Also if you do this and have soft limits enabled, you’ll have to decrease the max settings accordingly so you don’t someday crash into the right or back side of the machine.

I am using an X-Carve 1000 which is where it happened.

I wonder why, do you have the limit switch stops sufficiently far away from the edge?

Even if that worked I wouldn’t want to rely on not forgetting to raise them before homing to avoid a crash. I think that flipping the Y support plates is a reasonable fix as long as I can get longer ones to compensate.

Yeah I know. There’s another factor, I recently completed a new workbench with a torsion box top for my X-Carve and got advice to ditch the 20x20 frame entirely and fasten the waste board right to the top. If I do this I’ll probably use small pieces of 20x20 on the outside to mount the Y supports and put threaded inserts in the workbench top to mount the wasteboard. So lots of potential changes. But before I do any of that I want to spend some more time doing actual projects with the machine.

I’m limited by the belt flip over, not the limit switches. I’ll have a look when I get back in the shop later this afternoon, but my bit is right at the edge of the screen printing on the waste board so I think I’m getting access to most of the available space.

You can’t be missing very much just to move your limit switch over just a touch. Do you use the full workspace of the XC.

I had to move the X stop over about an inch from where I had it. I’ve only had my X-Carve since Christmas, but one of the projects I’ve cut on it was a rocking horse (actually rocking cow) that a friend designed and every bit of available work area was appreciated.

I had a look at my machine and I’m really not sure what the difference could be. I’m all the way against the zip ties in both directions. 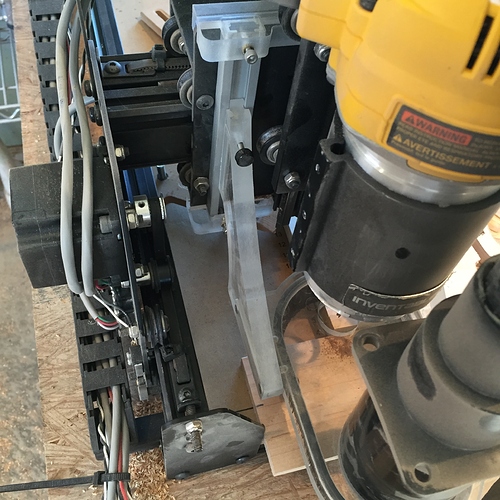 Joe, Use a drop of super glue between the belts at their termination. Gets you the additional inch and they don’t budge when you add the tension. I’ve been using them that way for while now and I get the full travel and no worries about the belts slipping. I can jam against the end plates without interference.

I used shrink wrap over the belts instead of the zip ties and it works well without losing any travel.

@ErikJenkins Both good solutions guys, but I’ve really not required every inch available at this point.

We are just wondering why the SuckIt dust boot clears my machine and yet hits the plate on @StevePrior as posted above. It doesn’t really make any sense to me, but something is installed differently between his machine and mine.

@JosephCompton I think that is the explanation. I did use a zip tie like you did, but I faced the “knot” the other way so it doesn’t interfere with the carriage wheels and I took advantage of the fact that the outer wheels can go farther and that it’s the more recessed idler wheels which are the true limit of how far the carriage can move. I was trying to maximize the total travel which wasn’t important to you. As a result I set my X and Y stops almost an inch closer to the end than you did and that was enough to enable the crash. I still have my Y stop set very forward, but now have my X stop moved over to avoid it.