Height of Z axis from waste board

Up to the user and the application… if its too high certain bits (v bits usually) won’t reach the wasteboard. And thst would indicate its too high…

Since your asking about the z though… make sure to make the z limit switch as low as possible or it’ll fail the initial homing cycle with the switch partially pressed, but not pressed enough to make a signal… this is very common report around here from New users…

Hi Seth
Thank you for your response. I’ve initially set it to be inline with the X-Carriage and that seems to be working well. I did run into the limit switch issue on the X Axis during the homing cycle but I was fortunate to have worked with limit switches in the past together with the knowledge gained during the build to recognized the issue and correct it. That is a good point to have brought up for sure. Thank you again

Seth,
I just finished building my X-Carve. I have run the set up and the test carver several times. I have followed the procedures carefully, however the bit never touches the material. Could this be a problem with the Z probe? I followed the probing instructions placing the probe on the material to be carved. Is this wrong procedure?

Using manual controls can your bit even touch the wasteboard.

Click the arrows next to carve button and jog it down… if it stops moving Down b4 reaching the wasteboard then you’d have the same problem that Randy was, you’d need to loosen the 4 screws at the back of the z and lower it.

Between this forum and Facebook, I’ve seen this over 10 times in the past week.

I don’t actually work for inventables, or I’d probably get that page on the insurrection fixed

2021-12-12T15:10:00Z
I finished my build last week and haven’t encountered any issues with bits reaching the material. I attached my Z axis about 1" beIow the X Carriage and it seems to be fine. 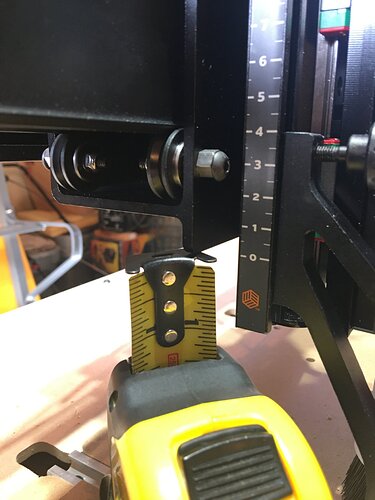 xcarve_zmount_location1536×2048 290 KB
I agree with Seth the instructions are a little weak in a couple of areas, but for the most part are great.
1 Like