Having trouble starting My Project. Easel cannot render my SVG file that was created using GIMP for the PNG, then Inkscape for the SVG file. The Material is 24"L x 11.25"W x .75"H. I’m using the smallest bit that comes with the End Mill start kit and Easel still says it is unable to cut the majority of the project. Any help or guidance is greatly appreciated, I’m very new to using a CNC machine.

Usually we see that message, but you have to ignore and skip. Next screen will ask you the bit size, you can choice smallest bit, do the work surface Z zero and you’re ready to carve.

There is no message that appears, simply the rendered example of the project on the right screen of easel its primarily red, and when I show tool-path it doesn’t show the machine cutting the main image.

Do you mind sharing your SVG file? As far as I can see, that design should be largely cuttable (is that a word?), but I can’t seem to plug in the right numbers to make it work either - and while I’m not the Easel guru, I can usually bend it to my will when necessary. I’d like to take a look at your file and see if maybe there are some extra paths or something that Easel might be choking on during the import process.

Absolutely. Any and all help is greatly appreciated.

i imported the above svg and it did the same thing. id say something is amiss with the svg file

I reduced the image size in GIMP then created the SVG in inkscape. Loaded the svg into easel and enlarged the svg to fit my material dimensions. The file was large prior to reducing image size and easel kept crashing.

I think you have a lot of issues going on with your SVG.

Even with the 1/32 bit, the cursive lines between letters and the smaller tree branches are just way smaller than 1/42. The little white holes between the leaves in the thicker parts of the tree are still just likely to be way to small to fit that bit around and still carve into the black.

I went in to Inkscape and put the tree back to a basic outline form, and used a cursive font from Easel to make a quick mock-up of what it could look like.

The text is actually made up of a number of concentric paths. After tweaking the stroke/fill options a little bit, here’s a close-up of the top of the letter E in “The”: 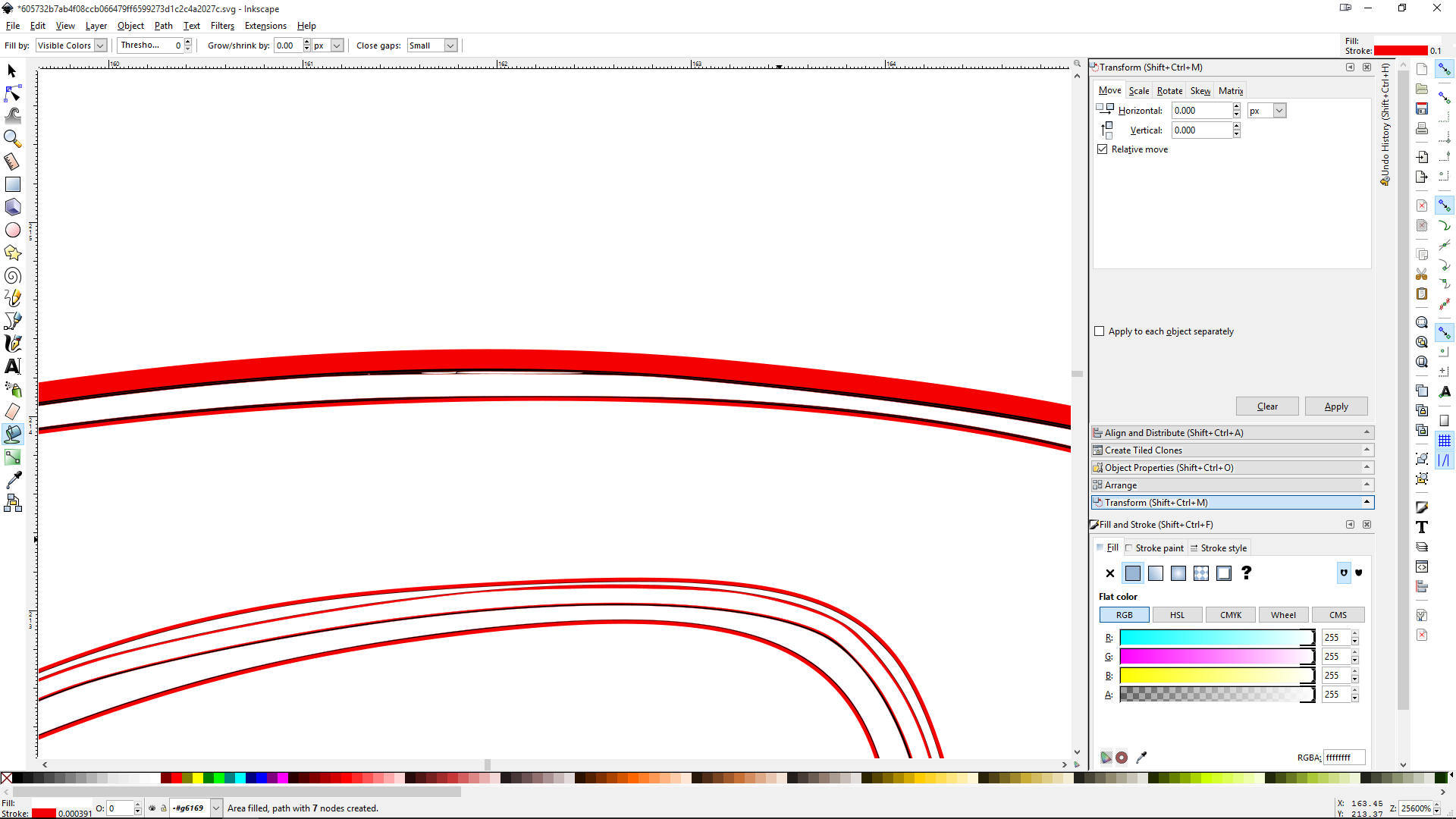 The thinnest red lines are the actual vector paths. The black areas are parts that I haven’t manually filled with white yet, and the thicker red lines are even more paths with a red fill color in between.

Easel is trying to generate tool paths for each individual vector, and since the multiple paths are so close together, it can’t cut one without overlapping another. Even an unrealistically small bit won’t be small enough, as far as Easel is concerned.

So there’s the problem. As far as a solution - well, I’m pretty good at analyzing this stuff, but my actual working knowledge of vector graphics software falls a bit short after that.

I’m historically a 3D/CAD person and am still learning how to use stuff like Inkscape. Hopefully someone else can chime in with some tips on making your image more suitable for import into Easel.

Thank you both for the valuable information! I guess I need to rethink my approach in the future and put more emphasis on making a more simple design. Possible look into Inkscapes ability to render paths in a more simplified way. Alan thanks for tweaking the design! I’ll be sure to adjust the tree image and import that as its own SVG then add the font from Easel. Thank you all

Here’s the SVG I ended up with in case you want/need it.

For some reason, I forgot to remove a white box…but that’s easy enough to delete in Inkscape or Easel.

You’re a gentlemen and a scholar.

I ran your .svg file through Illustrator, released all the compound paths (letters like O or P with a path inside another path) and re-made them, then saved it and imported into Easel. It seems to work just fine, although the text is still too fine to cut even with a 1/32" bit.

It seems that for thin cursive fonts you want to use a v-bit for best results.
@JarradTrudel did a nice sign using Aspire. Though I am sure VCarve would have done just as well.

Currently Easel doesn’t support v-bits (thought I am sure it will eventually)
Thought @Rusty did a post on how to set up easel to use v-bit in place of a standard bit.

Oh well, at least someone is lookin’ and learnin’