Help! I have problems with my carve

When I carve an image, on the left side of the image, I get a small line on the edge outside of the image. It also leaves a small edge inside the image. Its like the bit doesn’t go all the way back to the edge. Has anyone had this problem or any ideas on what might be wrong? Thanks

I’m not sure what you’re describing, can you attach a picture to show us? 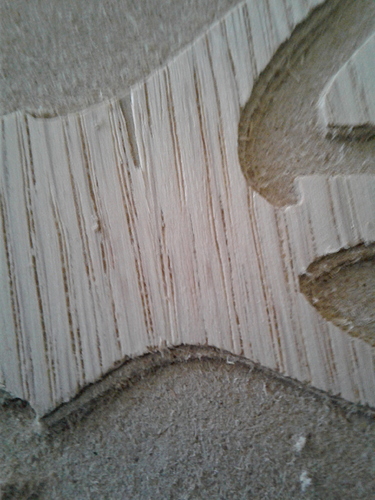 Gotcha. If it looks like the whole design moved slightly one direction, then you probably have lost steps. Lost stepper steps happen when the stepper wants to move but can’t for some reason or other. A few common causes are tight V-wheels, loose/tight belts, incorrect potentiometer settings, and loose pulley screws. There’s a good forum thread that addresses the issue that you may want to check out: [Guide] Offset cutting, Lost steps, Positioning errors, etc

There’s also a thread with some videos I’ve made that show how I check my belt tension and set my pots: X-Carve Maintenance/Troubleshooting Videos - Add Your Own!

If that is only happening on one side of a cut along an axis (i.e. not all the way around), it may be an indication that your wasteboard isn’t square to the spindle. Basically, the bit is cutting into the wood at an angle instead of cutting at 90 degrees.

It’s also possible that you’re just trying to cut too fast and/or deep and your bit is deflecting. If you think you have your machine dialed in, then try dropping your feed/speed a bit and see if the problem continues.

That should help you get started, lost steps and non-squareness are common problems with new machines. Once you get your machine dialed in, they will generally disappear.

Thank you very much Robert!!

hey robert in your opinion do you think that the x-carve it capable of creating tool deflection with a tool over .125" in diameter?

curious on your thoughts about that

I don’t have data or simulations to back it up, but I think that on an original and unmodified X-Carve the machine itself will flex before a bit larger than .25". .125" bits absolutely will deflect, and .1875" bits may have a little bit of deflection.

Once you start modifying it (some sort of X stiffening mod and Y braces), it will likely increase the bit deflection in all size bits, even .250". At some point though, the deflection will be less of a problem than the lost steps due to stepper limitations.

That’s just my think-so’s though.