Need some assistance in tuning up my XCARVE for precision inlay work using the inlay app.

What I find confusing is the female part is perfect while the male part is off virtually the same amount for both tests. I am not changing the cut path on the male piece leaving it set at “on path” as the inlay app delivers it.

I’ve adjusted V-wheels so they are quite snug being barely possible to move with my fingers. I’ve “tuned” my belts for a nice Low E using my ukulele tuner. I’ve also verified steps/mm across X & Y using a 500mm rule using that most excellent tuning video. If it was a bit diameter issue, I would think that both the male and female parts would be equally affected.

Any thoughts on how to correct this issue?

I am not familiar with the inlay app, but most times you would use outside the line for the male piece. This explains why your piece is too small.

It will show you exactly how to use the app!!!

Thanks for the replies.

Erik…In the Inlay App, you carve the male piece “on path” as the app takes that into account when calculating and generating the male part. I verified that by checking the size of the male part in Easel. The 1" square is listed in Easel as 1.062" which is correct for an “on path” carve to 1".

GordRock: Didn’t know about the video although I read the forums on this topic quite a bit. Thanks for that. I did review the vid and I’m making my inlays correctly. It’s still a puzzle.

I'm Looking For Tips on Inlay's this is how I do my inlays I’m not real good with videos but maybe this could help you. I get some decent results

totally not familiar with the inlay app either but as a work around would it be possible to change the bit size on your male cut only to trick the unit in to cutting it a bit bigger. I would think however that for an inlay you would want there to me a small glue line particularly on larger more complicated cutouts. Wood expands and contracts and without a little give I can see buckling occurring. It’s quite likely that the inlay app is performing exactly as designed.

Thanks for these suggestions. I’m carving shell and recon stone so angled cuts won’t “cut it”. I also don’t want glue lines because shell & recon stone never swell. I liked that video though. Good ideas for inlaying wood.

I tried for fun using “outside” for the male part even though that isn’t the way the inlay app works. No surprise the 0.75" square ended up about 0.801 or about 0.0625" larger than my original too small square.

Pat, Good idea…I’ll play with making the male piece bit size artificially higher by half the delta. Since my results are consistant, for this bit anyway, it may get me past this one project. However, something is still not right…so any other suggestions appreciated!

You could try using the offsetter app to make up the difference on the male piece it won’t fix the problem but will get the job done. Doesn’t make sense that it would cut the pocket perfect but not the cut out . How are you measuring your bits. Are you entering your bit size in the app and in the easel menu?

I’m measuring the bit with digital calipers across the widest part of the bit. And yes, the bit size is being entered into the app and easel. There is no logical answer I can think of why the female piece is perfect and the male is short. If the bit size is off, one piece should be larger than target and one should be smaller. I have even tried replacing the DeWalt router as I had an extra brand new one in the shop thinking I might have a runout problem that only reveals itself in the male “full cut” pass. Of course, exact same result.

Thanks for the suggestion of the offsetter app. Wasn’t aware of that one before your video. I should run a bunch of tests against various bits to see if the error is consistent across varying bit sizes. But as you say, it’s a bandaid.

Try cutting a straight on path line in some scrap, then measure the actual cut width with your calipers and use that as your bit size. This should give you the most accurate bit size.

Testing all this on wood. Can’t afford to test on shell! I’m using Hard Maple as the material selected in Easel although I’m using some scrap koa and rosewood.

I just finished running the full calibration test pattern and the results are similar. Every pocket shape is within 2 mils and every outline shape is small. Circle and square outlines are about 25 mils too small (using a 1/8" bit). The triangle outline is a whopping 53 mils small. Brain too fried to figure out why the triangle is twice that of circles and squares. Probably too much data but I’ve attached my measurements if anyone has an A-HA moment. 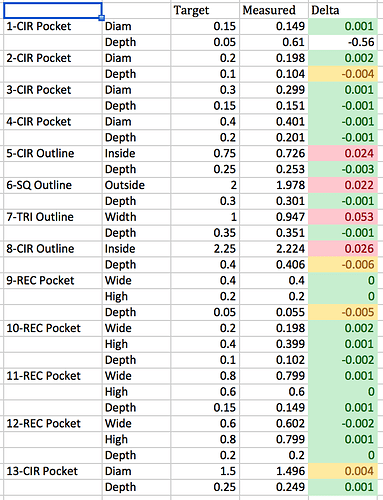 Not for the “outline” shapes. At least my understanding is a well tuned machine can get to the 3~4 mil accuracy level. Being roughly 1/32" to almost 1/16" off is pretty significant.

Sorry, I was never clear that it was all in inches. And yes, I’m going nuts trying to figure out why pockets are perfect and outlines are garbage; in such a precise manner.

Any news on this ?

Still working with the support group. One interesting/telling(?) test we tried was a simple hash mark with vertical & horizontal lines. Basically testing distance accuracy with a full bit cut. Came out perfect. That was a surprise to me. It does suggest mechanically, the X-Carve looks real good.

Did you ever figure out the problem on this? I am experiencing the exact same issue and cannot figure it out. I have done inlays in the past and never had any problems.

Nothing definitive but I’m achieving the results I need. I played with the Y-axis v-wheels quite a bit to achieve acceptable results. They ended up a hair looser than what I thought the instructions suggested. I also found that having the v-wheels tensioned as close to each other as possible helped (I guess obvious). I also learned that I can use negative numbers for inlay generator tolerances. So while the test pattern wasn’t within tolerances, my inlays were.

It worked fine for about 3 months then my inlays were getting tighter. Re-ran the test carve and it was within tolerances. Now I don’t need to use negative numbers in the generator and all works as expected. I guess it mellowed out.

So no, I never had my a-ha moment and I suspect RobertCanning was on the right track. Anyway, it’s working better than I hoped and my inlays, using a 1/64" bit, are very tight. Nice!