I’ve been doing sign carves with the 60-degree V-bit from Inventables. Been using this bit for awhile and many signs with no problems.

However, instead of a usual flush surface in the carved areas, it’s has lengthy grooves. I measured both bits with a caliper and they are identical. But have never had this problem before.

Any ideas what is going on??? 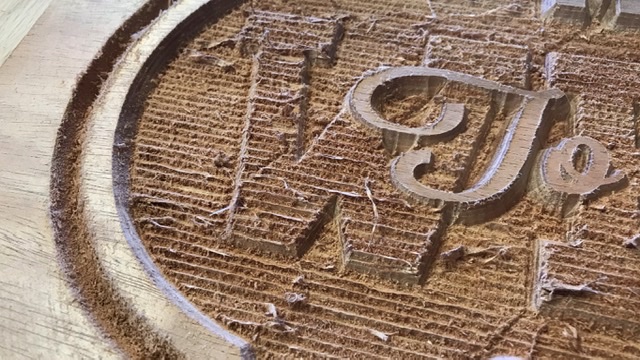 Neil, I’m still a newbie on that end. Even though I’ve been carving for a year, I’ve never had problems before where I change those settings. Where is the stepover settings?

I’m using Easel Pro, and I did make a new bit for the Whiteside, but the settings choices are just the cutting diameter and angle. 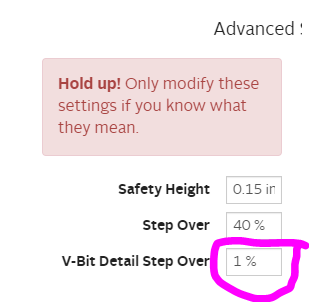 OK, thanks for pointing that out!

The stepover for V-bit is currently at 10%. Is there a general recommendation for a certain percentage? Why would this change suddenly? I’ve done this sign before and didn’t have a problem. That’s why I thought it was the bit.

I think 1% is the default. I don’t use Easel, so that’s what it was when I opened it up.
The previous but you used may not have had as sharp of a point. A V-bit with a flat tip will clear flat areas better.
I’d recommend using a flat bit to rough and then run the detail with the V.

So my older worn bit was actually doing a better job! OK, I’ll put that bit back on, bump the stepover to 15% and have it run through again.

Well, looks just as bad, with the stepover at 15% using the old bit. I am thoroughly confused as I have always had clean cuts on the flush surface. Nothing like this.

Yes, reduce the stepover. Don’t increase it.
One percent.

Ok, sorry for being clueless on this. Since I never had this problem before, stepover is completely new to me. I will set it to 1% and give that a try. Thanks Neil!

stepover is completely new to me

In Easel’s case, the percentage of the endmill diameter that it moves from one pass to the next. Think about when you mow the grass… What percent of your lawn mower cut width is cutting grass? The lower that number, the more overlap you have.