Hey guys, I’ve been messing around with Easel some in an attempt to get more familiar with it. I found the Marvel Mayan calendar files on here and loaded the file up. Looks great and no issues with it.

So I went out to Sandy Eggos website and grabbed the DC version. I loaded the SVG up in easel and it was just a bunch of outlines. I then went about assigning all the parts a cut path in Easel (very tedious lol). On its face it looks just like the Marvel one now. Except when i try click on it to move it around. Its like 1500 individual pieces, so you have to highlight them all to move the artwork as a whole. The Marvel file you can just click the image anywhere and move it all as one single piece.

I think this is causing my file major bloating and crashes when i try to simulate the job. Marvel calendar has no issues simulating or anything. Any one have any suggestions? I’ll put a screen cap of the two for comparison. 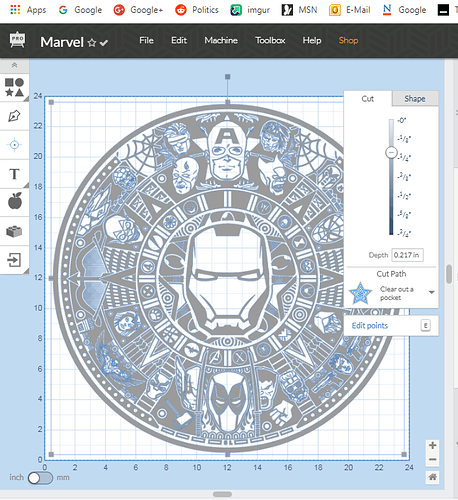 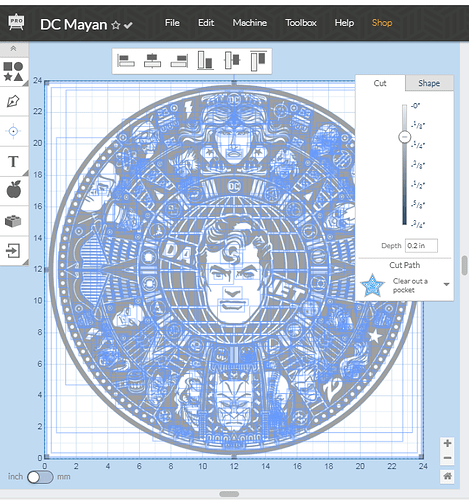 Where’d tou get the Marvel Calendar? His original looks the same to me.
Anyway, brought it into Inkscape, and the SVG below should work for you.
Right-click–>Save As

I have one of them and the star wars, I went through both of them and made them each one single layer, I have not tried the Marvel in Easel as of yet since I flattened it, the original file I had I ran it as a 28", it took it 1:15 to 1:30 minutes to write the tool paths if I remember correctly. I have ran the star wars one since I flattened it it ran well. Both are setup to be positive or negative of each other.

I got the Marvel one off the forums here. The DC one I went to Sandy Eggos website and downloaded it from there. Imported the SVG straight into Easel.

What did you do with it in Inkscape?