Had a hard drive crash today but this has nothing to do with it.Same issue with 3 computers. Ok hope one of you guys might have an idea what is going on. first off here is what I have done.
clean install of all programs including windows.
new cables.
tried different firmware.
tried different senders and software same issue
checked every wire and connection.
checked belts pulleys and idlers
getting a vid uploaded soon to show issue.
Here is the issue. in laser mode doing raster there is a lot of ghosting and missing lines also when engraving an outline box for the image it engraves for a split second then laser goes off till top of the box then the rest of the box engraves fine.

Do you have a spare Arduino to try?

wish i did but nope
After dinner going back out to check it all again.

new and old code now does the same thing

So, this is a repeat of a g-code file that you have previously used successfully? Can you send me the g-code file?

this is the file I use to calibrate with 45deg. horizontal and vertical all have the same outcome.
deer Resized.txt (1.7 MB) 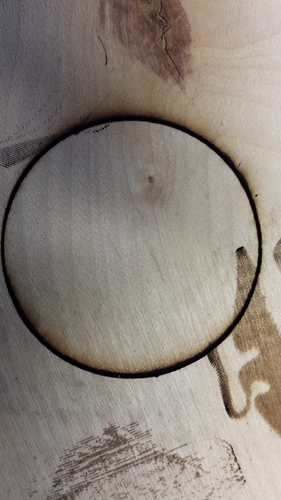 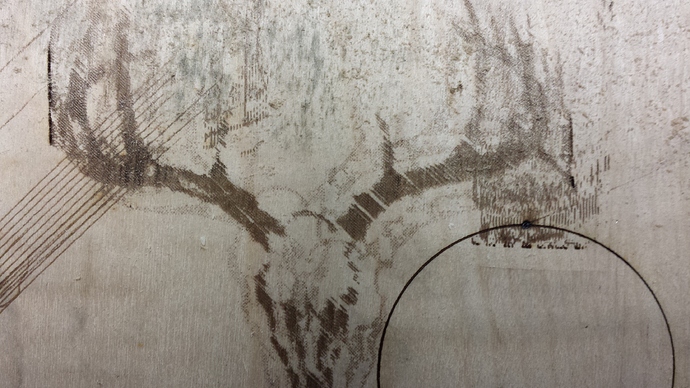 I just ran your file, watching the PWM signal on an oscilloscope. I didn’t see any extended laser off times. There were several places where the PWM was off for about 1 to 2 seconds, but if you have white space that seems normal.

The repeatability is puzzling. The deer in the image does look like there are positioning errors (could be timing errors).

Yeah I am kinda at a loss on this one when it comes to an issue I have never had one repete with perfection as this one does.
Is the button on the arduino a reset if so what is it’s operation just a reset or is there more to it.

I’m out of ideas, short of hardware failure. The vector circle looks good. Maybe the people at JTech have seen this before and can offer some assistance.

[edit] button is a hardware reset, just that, the Arduino comes back up as it does when you power it on.

One desperation attempt you could try is to reseat the Atmega328P on the Arduino if you have an Arduino with the socketed processor. Sometimes pin corrosion can occur.

found this and reading it now
http://www.picengrave.com/forum/viewtopic.php?f=8&t=106&hilit=ghosting&start=10

Curious. Windows 10, or other versions, too?

Oh well I can not complain I have had great service from this machine. And arduino uno is pretty cheap to replace. If the mood hits me when I get up I may take the 2 hour drive to get one.

Not long ago, we found the modulation wire going up to the Laser driver had broke inside the insulation from flexing thousands of times back and forth raster engraving. It was causing an intermittent laser burn. We found it by jogging the laser power up some in PicSender and moved the wire around by hand in different areas and found the laser started to flicker on/off. Replacing the wire fixed the problem.

I don’t think a broke wire would cause the ghosting itself, but an intermittent connection may have created a issue with the UNO’s internal circuitry.

I will give it a try.

No change. I have also tried jogging the machine at different speeds and direction at varying laser power and the laser shows no signs of issues.

Ok did some test without the laser connected. the pwm output fails at the same spots in the gcode as the laser so that rules out any laser issues. I can change pwm settings manually in the sender but the pwm output fails when code is streamed regardless of output power. The only thing that has not changed in all of this testing is the arduino it’s self.
If the arduino turns out to be failing and I think it is I would be willing to send it to one of you 3 to play around with if one of you would like it for testing to see what the point of failure is. I don’t have the test equipment or the programming knowledge to do such a dissection it is the smd version uno.

It’s only $24.95 for a new genuine UNO R3. It’s not worth the time testing to diagnose what happened to that one.