I set the depth to 1/32 and it’s still blowing past that and messing up font, any ideas? This is a vector from illustrator, the artwork is not public and requires licensing 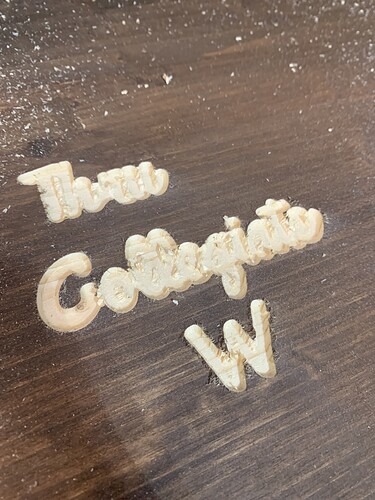 Can you share the file so we can look at it?

thanks Dave, see attached
I wish you could import fonts into easel, because its trying to force the flat bottom because of the vector and it would be great to have the V shape groove

Now I see what you’re talking about. Wait for someone more experienced than me to chime in. That font is going to kill you. The double L in collegiate as an example, because there’s no material left between the letters. Part of me thinks you’re gonna have to run deeper than 1/32 to get better results.

well, I did 1/8 and it was so deep it basically removed the letters, then I tried to go shallower and it basically ignored me, it still tries to carve like 1/8th even though I set to 1/32, I manually changed depth per pass and got the same, I agree though, I think the font is too thick in illustrator, which I cant control, bummer

You’re never going to get a vbottom with that font, no matter how shallow you try to cut it. It’s the design of the font. Compare that with the ‘Pro’ fonts in Easel.

I guess I am missing something?
I think this looks fine with depth set near 0.5"

I used to have this problem ALL THE TIME… 90 degree V bit did the trick. I use both the Diablo (Freud) from Homedepot and Amana, never had the same problem. I’ve stupidly tried the 60 agin for other projects but blasts details. So 90 v it it is forever now.

You can make your text in another program like photoshop where you have a greater variety of fonts, save it as a jpeg and image trace it into Easel.

Now that the thread has been brought back to life. I’ll share that 3 flute does a much better job than the 2 flute.