So, I’ve been getting some odd chatter lines in a few areas, and was wondering if anyone has suggestions on how to remove them.

I’m carving letters in relief, so they stand out by 1/4". To the left of some letters, I’m getting a distinct line of chatter marks, I’m guessing by the bit rubbing against the side of the letter. See picture below. It only happens when the bit is going one way, not the other, and it only happens once the depth gets to a certain point. The machine is calibrated and is working great. 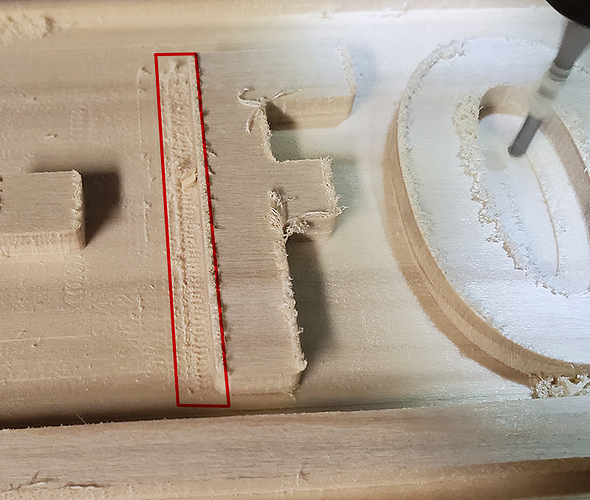 I’ve tried both Easel and sending gcode from PicSender, same basic result (although in different places). Anyone have suggestions to eliminate this? I’m making a lot of these signs and it’s time-consuming to sand them out. Fortunately it’s soft wood, but still.

If it’s only happening in 1 direction, it probably has something to do with the rotation of the bit and the direction of the carriage. What speed setting do you have it set to? You might try changing the toolpath direction of cut to be opposite and see if it appears on the other side? Have you tried reducing your DOC and increasing your ipm speed (or simply reducing DOC)?

Do you have another piece (not poplar) you can do a test cut on to see if it appears there?

Yeah, that’s what I was thinking, it’s the rotation and direction. If I change the direction from “climb” to “conventional” (going the other way, it looks like), I would think it’d end up rubbing the other side, but it sounds worth a shot.

I’ve tried to change the settings but it still creates that chatter effect. It did the same chatter in hard maple. Right now, I have 5 passes at .05" DOC with slightly higher speeds, and then a slower, shallower cleanup pass at .02" DOC at 40 ipm.

So, to recap, one suggestion: change direction of travel. I’ll try that this weekend.

Another thing is make sure everything is tight and secure that has to do with the carriage and router mounting, including whichever z-axis you are using and the Y-axis. I’ve had my carriage bind a bit on the cross-arm (X-axis) in certain places which resulted in a chatter-like movement only in those spots.

Another test would be to rotate the project by 90 degrees so that part of the cut is being done by a different axis movement.

Any luck figuring out what is going on?

Yes! I did another cut this weekend, this time with all the same parameters except the direction of the cut. Success!

In Vcarve desktop, I switched the cut direction in “Clear Pocket” toolpath from Climb to Conventional (the default is Climb), and the chatter marks disappeared. I had thought that reversing path direction would simply put the chatter on the other side of some letters, but apparently not. 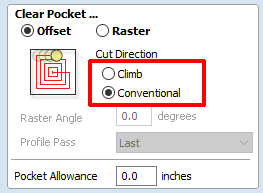 This is a little non-intuitive, but worked great for me in this instance. Thanks for your suggestions!

This is good news! Congrats!