Help with speeds, feeds and DOC for 1/2" plywood

1000x1000 XC, no stiffening mod, dewalt 611 on 5, 1/4" end mill and vcarve pro is what i’m working with. I’m trying to cut decently large parts out of 1/2" birch plywood. Started with 5 passes to cut all the way through and it binds up and gets off track. I’m all the way up to 10 passes going at 30 ipm and it is still binding up. I sure thought the XC could handle taking .05" at a time but it doesn’t seem to be. Does any one see that im doing something wrong. It seems crazy to take 10 passes on 1/2" stock

Sadly… I use metric. But cut plywood all the time. I have the 1000x1000 as well but I do have stiffening mod and the dewalt.

Using 5 speed will burn out bits. Done it quite a bit(pun intended)
I drill 1100mm per min. And a depth of cut of 2mm (mainly because most of what I do is in 2mm increments.) using a .11inch bit.

Not sure what all of that is in inches. But I hope this helps.

I assume the stiffening mod made drastic difference? I’m carving ovals, it does fine in the straighter parts but the corners is where it binds.

I don’t think it is your feedrate or DOC, you may need to tighten and adjust your belts and v-wheels. Also check your motor voltages on the Grbl controller (adjust the X and Y pots)

5 is also way to fast an RPM for plywood, you are just burning up your bit at that speed.

I’ve found the Shapeoko wiki page to be quite useful as a starting point for feeds, speeds etc.

The Shapeoki wiki page is a good starting point, but each machine is different. I would suggest you do a feed/speed test similar to the one at http://www.precisebits.com/tutorials/calibrating_feeds_n_speeds.htm. You will need to do it for each different bit, in each different material it will be used in, because two similar bits may be drastically different in the same material. For instance, on my machine the 1/8" straight flute flat end bit is best for fast, shallow cuts, while the 1/8" upcut ball end bit is best for slow, deep cuts.

The 611 was not designed for hours of continuous use, and having it set so high will wear out the brushes very fast. Most wood can easily be cut with a setting of ‘1’ or ‘2’, which will increase the brush lifetime and prevent overheating of your bit.

Finally, I’d recommend making sure your belt tension and pot settings are good. I posted a couple videos in this forum to help with them: X-Carve Maintenance/Troubleshooting Videos - Add Your Own!

Interesting. It’s funny how there seems to be a significant difference in the speeds & feeds used by different folk, all who are ostensibly using similar machines.

@RyanRoberts if you’re having problems at those speeds & feeds, I suspect you possibly need to bump up the current/voltage to your stepper motors (a search should find how to do this pretty quickly - let me know if you get stuck). Half inch ply, even hardwood marine ply, should be very easy to run through with a ¼" bit.

I too use a 1000x1000mm standard machine with the DeWalt router and use V Carve for most of my stuff. I’ve made many items out of plywood (both hard & soft) including an entirely wooden clock which required lots of very clean & accurate cuts in 12mm ply (heres an early version of it before it was tidied up https://www.youtube.com/watch?v=8FrmQOXdPkY ). I also use a lot of Jarrah (an Australian hardwood that is VERY hard).

When using my machine:

When I cut, I get clean crisp edges, zero burning and my tools have all been in use for some considerable time. If I need to get the sandpaper out, I get annoyed and so I’ve gotten pretty good at getting reasonable work, straight off the machine. Sometimes in really hard wood, I’ll need to do some minor cleanup on the floor of pockets - mostly I suspect because of the lightweight gantry that allows a little flexing under load. Even so this is generally minimal. In the image below, you’ll see a shot taken immediately after I finished cutting a base & lid for a box to hold a couple of packs of playing cards.

I used a scraper to remove the tool marks in the pockets and the remainder required a few minutes of cleanup with some 240 and then 400 grit paper. A coat of oil and it was good to go. 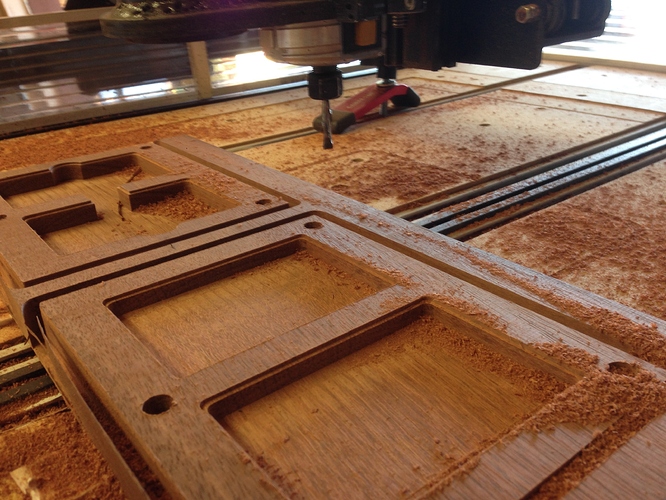 Thank you gentlemen. I thought about the pots first but I wanted to see if anyone mentioned that. I’ve been carving text signs for a month or so with very few problems so i think my tensions are okay. But I will check go ahead and check them since I did have some chatter and binding. Thanks again

Rather than suggesting anyone is right or wrong, I’d simply suggest you go with whatever works for you and produces an acceptable result.

More help needed. Lol. I adjusted pots, then I broke a switch on my z axis. I replaced the switch, now it’s giving me a homing alarm in ugs. Could I have burned up the switch while soldering?

@RyanRoberts welcome to the club, last time I did this, I think I bought 4 extras as spares (which kinda shows that it wasn’t the first time I’d done it).

Limit switch issues is getting into the tech side of things upon which I’m not qualified to speak with anything other than generic suggestions.

Does a $X reset fix the problem? If it does, before you home the machine again, make sure you give it the $H home command and then trip the Z Axis switch by hand before the carriage hits the switch and breaks it off again. If the switch is wired wrong (or faulty), and you override the alarm, you risk having the Z Axis move upwards again and then not being stopped by the faulty switch, breaking it off again…

later edit - use a pencil or something, don’t put your fingers into the machine!!

After this, I’ve no idea. Search the forum (for example here Limit Switches ) there’s lots of really good stuff already on the forum.

Failing that, contact @LarryM (I’ll hope he won’t mind me suggesting his name), Larry appears to know a huge amount regarding the wiring & operation of the electronics & general machine related info. He’s been a great help to me and he regularly appears on the forum as someone who always has good, thoughtful and practical advice.

Failing that, contact @LarryM (I’ll hope he won’t mind me suggesting his name),

Not a problem, glad to help out.

Ryan, maybe this will help you out.

What about plunge rate?