I want to just cut a circle and it keeps putting “dings” in the circle, and not cutting deep enough (not all the way through the acrylic). See pic attached.

The black marks are to show the “dings”. The first time around it cuts smoothly (no dings), then the second and subsequent times it “hesitates” and puts dings where it hesitates, with
each pass.

Any help is appreciated! 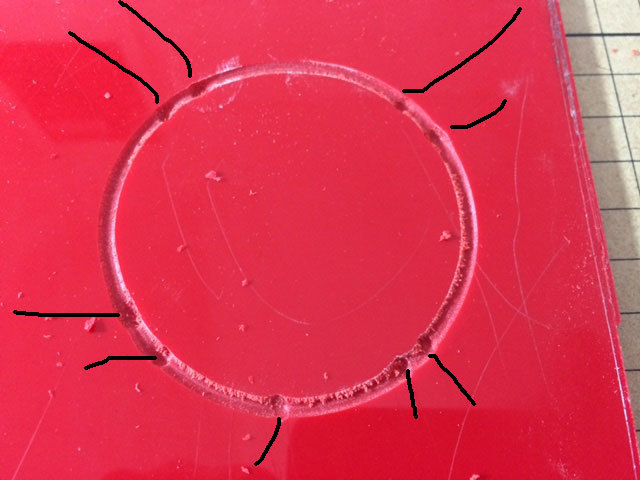 Do you have the “Use tabs” check box checked? Based on the way those are spaced around the circle, it almost looks like it’s trying to leave tabs… 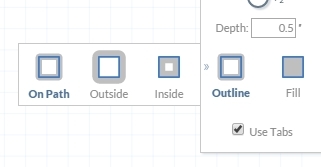 @DeborahAJaffe do you have a digital caliper to measure:

Also in the Easel carve menu you will see arrows. If you have a ruler or a digital caliper can you set the step distance to 1 inch and then press the arrow and see if it moves exactly 1 inch?

I’m probably wrong here, but you might check that your bit is tight in the collett (sp?) and not moving up and down while it’s carving.

The bit is in tight. The z-axis is moving up and down, but just not going deep enough into the acrylic when carving. With the tip of the bit touching the acrylic I moved it up 1 inch via Easel, and measured, and it went up 1.25 inches, not 1 inch. Do I need to do some sort of z-axis calibration?

Yes, Easel should ask you if you have the acme thread or the threaded rod in the setup, and adjust the turns per inch setting in GRBL to match. Can you give me a $$ readout from the Universal Gcode Sender?

You have to go to http://easel.inventables.com/setup you might have selected the wrong lead screw type so it is turning around too many times.

It hesitates at the point where it starts carving every time it rotates to that point- it “bumps” in that spot, and the hesitation (bump) seems to get worse the more times it carves around the circle, to the point where on my last attempt it went haywire at about the 75% point and fell off course and I had to abort it because it was gouging the waste board.

Your order shows you have the ACME lead screw kit. Did you select that in the Easel setup menu?

Thanks to everyone for the help!

I do have ACME chosen in setup.

Yes, turning off tabs stopped the dings from happening!

However, now it makes one full revolution and then it bumps as it goes over the starting point, every time it passes in that spot, getting worse each time it passes, then it went off track in the x-axis by about 1/4" and cut into the waste board, then I stopped it - around the 75% done mark.

I did what you suggested and lowered the bit tip on the acrylic, then lifted it by a 1 inch increment with the up arrow on the computer, then measured the gap and it was 1.25". The z-axis is not right somehow?

Any progress on cutting all the way through your material @DeborahAJaffe?