OK, I’ve done a lot of reading and can’t seem to find the right forum post or combinations of solves, so I thought I would post here so someone can point me to the right conversation!

I recently assembled a 1800mm x 1000mm X-Carve (right before they stopped carrying the longer makerslides, I guess.) I primarily bought it to make signs and pegboards. I have all of my belts tensioned to 3.75 pounds to raise the belt one inch in its center.

Here is my problem: When I carve circles at set distances apart, the distance traveled is pretty close or a little over, the circles are under sized by about 5% at .75 inches. I get the same result if I use a 1/4 or 1/8 inch bit, and even at very slow feed rates.

Here are my next things to try, but I would love advice:

Calibration is needed. Search the forum

Would that cause my issue? I have calibrated the machine based on the advice of this forum, but I don’t understand why cuts are undersized. When I used the calibration file in Easel and got everything dialed in, then the travel was too far between cuts.

Could it be the software, cutting on the inside of the cutline?

Maybe? I’m using Easel. I couldn’t find any settings like that in there. I’ll try doing a test out of Fusion 360 to see if I get different results?

There should be a choice of cut: on, inside, or outside

Could deflection cause this?

Ok, re calibrated and now my holes are not perfectly round. 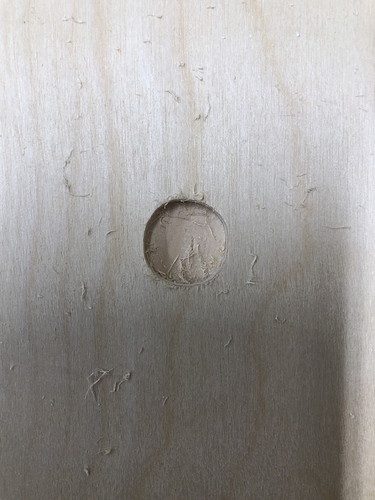 That looks like you could have overly tight V-wheels. You should be able to make them slip/turn with 2 fingers, but not with one finger.

“Oblong” circles, especially noticeable with smaller diameter holes, are due to deflection when the bit transition from X to Y or vice versa.

The rigidity or firmness of each axis are not equal causing the bit to be “dragged / pushed” during the transition.

Try reducing the speed of travel and depth of cut right down on a test. If you get a more circular circle this proves that deflection is the cause as Haldor suggests.