How about a "hello world" test for the CNC testing and troubleshooting?

After reading through the forum, I’ve noticed a lot of similar problems. The ones that come to mind are:

I was wondering if someone could recommend a good material, pattern, and speeds to use to test for any problems with any of these noted. Sort of a “hello world” for CNC, while running the spindle at greater than recommended speed and cut depth.

The purpose of this would be to test the CNC after installation, and as necessary if problems are encountered, in order to be able to nail down which problems may be present. Having a “typical” test would make regular troubleshooting a LOT easier, since there could be photos to show what each problem would look like. For example:

With a more thorough list of issues than what I listed above, I imagine it would be (relatively) easy for the designers at Inventables to come up with a pattern and troubleshooting guide to go with it that could address 99% of the problems that seem to keep coming up.

I wish I could help more with this, but I’m stuck on the sidelines until my CNC gets delivered. It would be great to have a set troubleshooting/calibration pattern to use when I get my new toy though.

I would suggest using machinable wax. It machines very well has no grain that can cause problems. It is very forgiving if your DOC is to big.

I like the idea, but is that something that is readily available and will keep well in a hot garage? I was thinking that whatever material it chosen should be something that can be purchased cheaply and easily nearby (maybe at a big box store) so you aren’t waiting for shipping, and should be able to be thrown on a shelf and stored for a couple years without changing characteristics.

I’m also curious about whether the wax would cause enough force to cause belt slippage, or be too soft to use calipers on. I’ve never used it, but I imagine the test should stress the belts the spindle just enough to reveal small problems before they show up in the middle of a large project.

Machinable wax is very stable and takes a lot of heat to melt it. I have had pieces of it in an uninsulated and non air conditioned portion of my shop when the temp in there has gone to well over 100F on a hot day when the sun is bearing down on the roof and walls.

Inventables carries machinable wax and if you recover the chips you can remelt it and reuse it.

It is much harder than standard wax and machines with a nice sharp edge. You could use it for checking that you have the machine set up correctly and then move to harder material if you wanted to stress the machine a little more.

I do a lot of test cuts of parts that I want to check the Gcode and don’t want to ruin end mills or expensive bronze stock.

I’m sure I will be testing my machine with it when it arrives and I have all the mods done.

edit
Here is a photo of a small part that was going to be 3D machined in aluminum done in machinable wax to test. 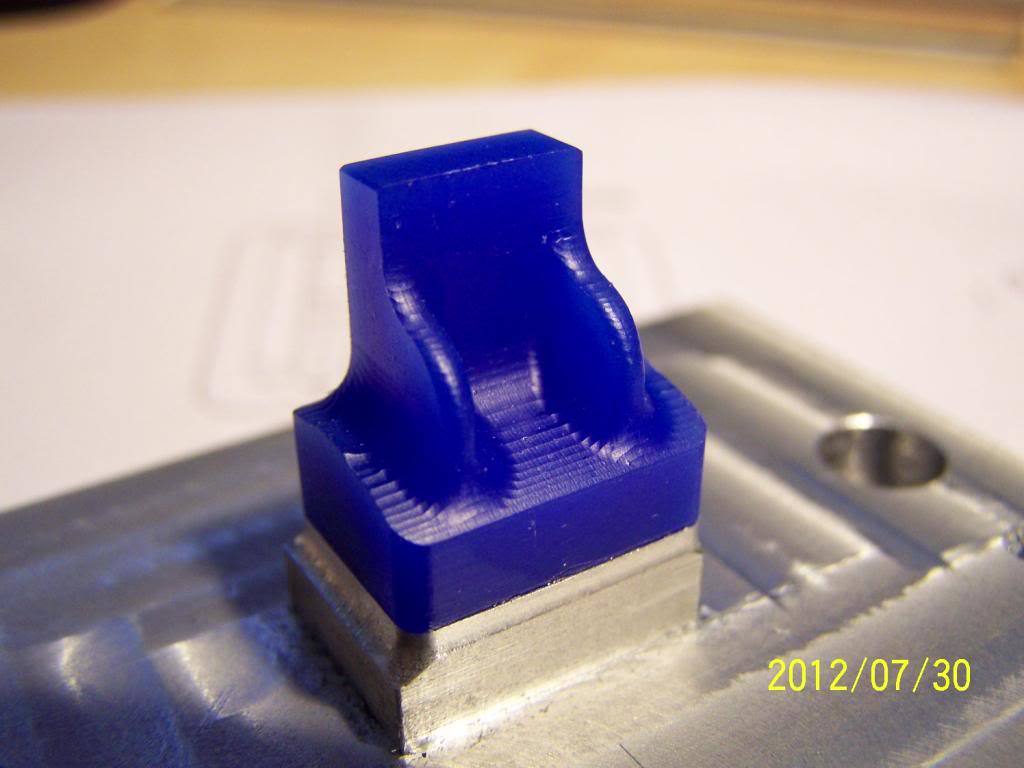