How to do this?

Hello everyone I am looking for ideas on how to do this project over and over again very easily. 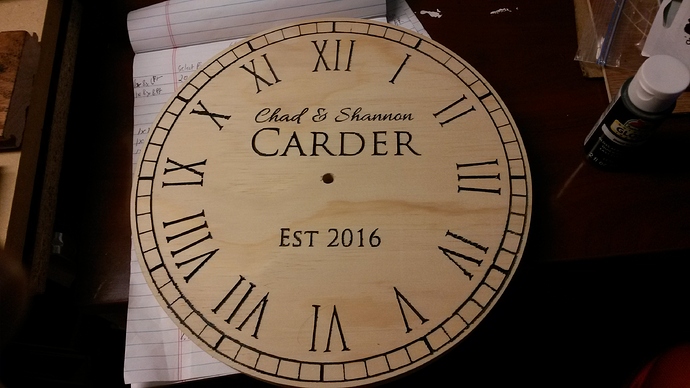 here is the project

I am looking for ideas on how to make a jig to not only clamp the circle in place but also zero my machine in x, y, and z easily and in the same place over and over again

here is a picture of what is on the back 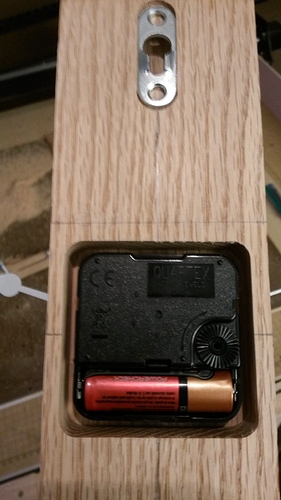 thanks for your help guys 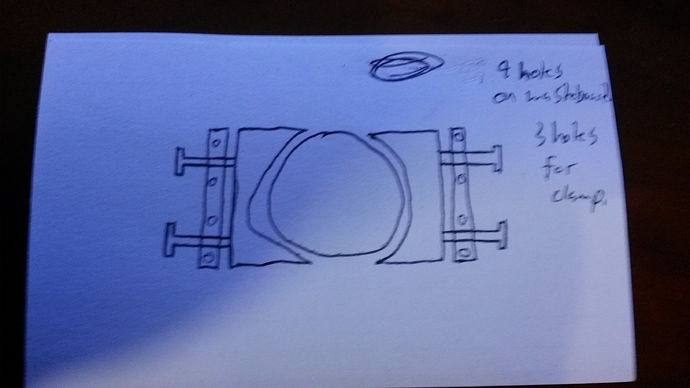 To zero the machine, can you mark the center of your work where the clock mechanism will be and use that as your work home?

the problem is there will be a hole in the work piece right where my x, y, z zero is at

Get some good double-sided tape to do the hold-down and you’ll be fine.

Is there a reason you couldn’t engrave the clock face first and then cut the circle? I’m assuming you’re cutting the circle with something like a router circle jig. You could have the engraving bit mark where the center hole should go while it’s doing all its other work. Once you take the engraved piece off the mill, drill through where it marked center and cut out the circle.

What about a dowel in an mdf template… the template clamps to the surface in a known position and the dowel comes through the blank’s center hole.

that would work but how do you setup universal gcode sender to remember x, y, and z zero position if the blanks are cut days, weeks apart?

Zero on the corner of the template. Accurately measure the center X and Y offset. Offset your center with a macro in UGS, it will be the same each time.

I am curious what do you think about jus using a vacuum table to position the circles each time?

I don’t use one, but it would work.

I just thought of something. Would this work? I’m no expert, so forgive me if this is dumb.

First do the backs on your router table like you said, and cut a block that just fits inside the pocket for the mechanism and is flush. Then glue that to the center of a piece of wood that is slightly larger than your clock. Run a bolt up through the middle that will fit the hole for the clock hands, and affix the whole thing to your x-carve.

That way, as you remove each carved face, you could just drop a new one on and affix it with a wing nut in the center. The block will hold it in the proper orientation.

btw not a dumb Idea

does anyone know if V-carve pro has this capability??

For setting up the CNC you can use work coordinate systems for milling both sides. http://www.shapeoko.com/wiki/index.php/G-Code#Using_the_Work_Coordinate_Systems

I would build a small jig for clamping/work holding. Starting with square material you can use wedges to clamp it in place. Have the cnc mill out the back pockets, center hole, and cut the circle. Save your zero to the G55 work coordinate, and then when sending make sure your file targets the G55 WCS.

Once you have the first side cut out, you can flip the piece and use a screw in the center hole to hold down the material for the face cutting. Use a different WCS (G56).

You could batch out a bunch of the back side milling first using a 1/4" end mill and then batch out the other side using a vbit.

The WCS will keep you accurate in the X and Y. When changing a bit you will need to adjust the Z.

Can you use the center of the work as your Zero point? If you make a jig with a short enter dowel that the clock face would drop onto, you can get repeatable results.

Make your jig out of something with a sharp corner so you can always put it in the same spot on your machine. Mount a dowel to it that does not stick up higher than your clock face. The center of the dowel will be your X0 and Y0 locations.

This next part only works if you have limit switches and have a repeatable machine home position. GRBL will let you store multiple workpiece Zero locations. The G54 through G59 commands change these locations. G54 is the workspace (material zero) the machine defaults to after a power cycle or reset. You can use one of the others as your Zero point so you can come back to this project whenever you want.

I did a forum post about my investigations into this a while back. Here is the link.

EDIT: I saw @FrankWiebenga post pretty much the same thing as I was writing this up.

center and even in fusion 360 I am not sure that there is away to make sure that the bit never crosses the center of the clock.

You can set the safe retraction distance in Fusion 360 (I think that’s what it’s called). It will add a little bit to your carve time, but it will make sure the endmill rises enough to clear obstacles.

EDIT: In F-Engrave, it is your Z-Safe parameter on the main screen. It raises the bit a certain level above the stock before any rapids.

In 360 there is an option in the cutting parameters for the operation to set a ‘fixture’. You can then select some geometry that it will avoid while doing the cut.

thats awesome could you tell me how to do that?

Here is a link to a video that shows you how to set it up:

BUT! I’m not sure that it works like I thought it did. I assumed that it avoided the fixture, turns out it may only use it for letting you know if you hit it. If you want to avoid it you may have to set up the fixture as ‘model geometry’ instead:

Instead of having the machine cut the center hole, have it engrave a small x. Zero to that each time.

Drill the center holes by hand after they are finished.