How to import DXF files into Inkscape/Easel perfectly to scale

This is great! It seems like many people were having trouble with the closed polylines part and ending up with a file containing a ton of unjoined line segments in their .svg.

I’ll can do a video of how to process a DXF (join the segmented lines) in Inkscape if anyone is interested.

I’m not an autocad guy so I wasn’t sure if it was just how the exporting engine was treating all the lines in the conversion process, or if there was something that could be done inside of autocad itself to make the segments into closed shapes. Great work!

Thanks for doing this! I bookmarked this and now I’m trying it for the first time. I’m having a couple of issues:

In DraftSight (AutoCAD), when I make everything a Closed Polyline, it grabs everything that I drew that has weird curves, but ignores the perfect circles that are stand alone parts.

When I import the SVG into Easel, it won’t let me cut Outside (gives me the “Cannot Offset Open Paths” message).

It also completely ignores cutting some of the parts (in addition to the circles), which don’t seem to be any different than the ones that it does cut.

I’m working on a Tip Jar Project, so I’d like it to be perfect before I post it there. Thanks in advance for the help!

Here is an SVG of the corrected lines, I am not sure if the size is correct — the 2 circles are 3" if thats right the it should be good to go

Wow guys, thanks! I use Snap a lot, so thought that it would automatically close those gaps and eliminate the need to trim.

Maker, do you mind if I use that DXF file for a video tutorial?

While I appreciate the spirit of your generosity in giving back to the Inventables community, this is part of a Tip Jar Project, so I’m not sure how that will work. What did you have in mind?

I’ll have to think about the best way to incorporate your offer with my Project. I like the idea of a collaborative effort. In the mean time, I’m still getting the Cannot Offset Open Paths message on your SVG.

Thanks for the advice, Phil. Yeah, I’m still going to go through the exercise to clean up my original drawing so I can be successful on my own. 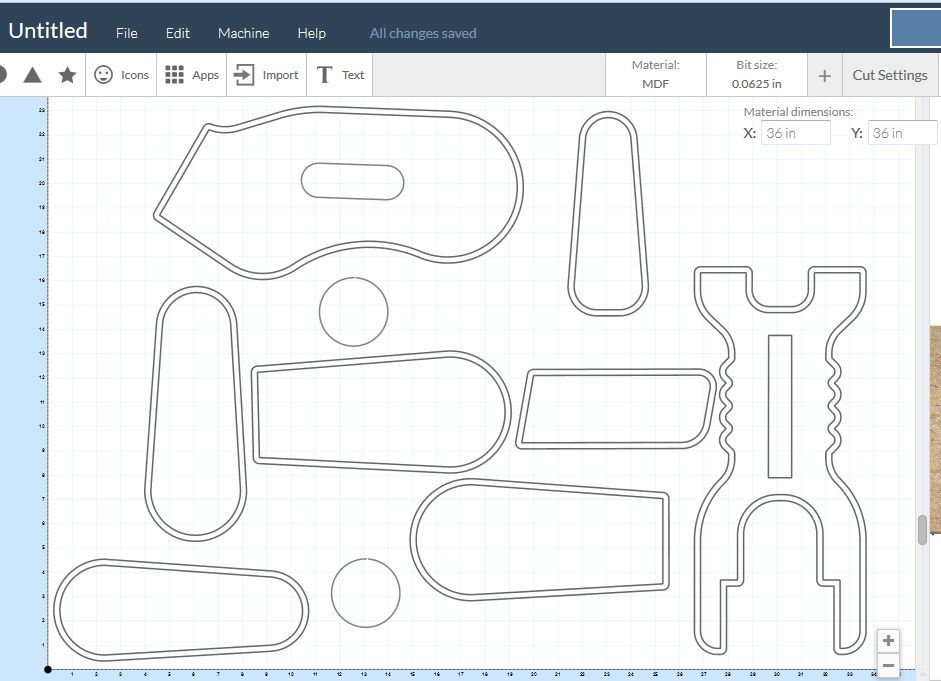 After playing with it in Easel a bit I came up with this, a few parts need to be exploded

Nice! Is that Outside or Outline? Also, what’s up with the circles and interior cutouts? I guess if those end up being through pockets, it’s not too much extra time.

I also need to add axle holes in the center of the hubs and swingarms. After looking at all the apps Inventables has added since I joined the forum a year ago, I’m thinking about adding some decorative gears and maybe some curved text or something to personalize the bike.

Oops, I’m running the risk of hi-jacking this thread, so I’ll resurrect my Tip Jar thread once we’ve fixed my boo boos here. Thanks again, guys! Making this balance bike for my son while he’s at the right age is one of the main reasons I wanted to get an XC1000.

Ok, I’ve fixed the easy stuff, but I’m evidently not good enough with AutoCAD to do the things @PhilJohnson suggested.

@GlennMDutcher, let’s go ahead and make that video so I can see what I’m doing wrong or not doing right. I’ll post that in my Tip Jar Project as an added bonus.

Here’s my DXF file with a couple of the easy things fixed. I think Snap was snapping to Quadrant instead of End, which messed me up when zoomed in. Sigh…

@GlennMDutcher was unbelievably generous to make this video to show how much effort it was to fix my evidently crappy AutoCAD drawing.

Thanks again for all the help guys!

Hello,
I draw AutoCAd in scale 1: 1 (mm) and export to DXF for inkscape.
When I open in inkscape, the scale is right, once saved in svg amount easel, and here the scale is wrong.
correct 270mm in inkscape, while easel is 240
where am I wrong?
Thank you

This is my balance bike Tip Jar Project file. I’m working on final assembly and posting the finished project.

I would like to see a video of how you did that. I am trying take a picture of the kitchen utensils, knife, fork and spoon and trying to bring it in to scale. If you can walk me though this I would greatly appreciate it. I don’t have Autocad, but do have inkscape.