How to import gcode from Fusion 360 into easel

Would someone please present a step by step procedure to import gcode from Fusion 360 into easel.
I know there are similar topics on the forum, but so far no one has given information that is helpful.
I hope I am not the only person trying to use the x-carve that does not have a good background in
computer file manipulation. I need help with every small step and every click to get from the gcode generated in fusion 360 to
running the project on my x-carve.

I’m far from computer literate myself, but I will try to give step by step instructions on how I do it.

This is assuming you know the cad/cam part of Fusion 360 and set your toolpaths how you want them. Also, make sure you use the easel cps file when you generate the g-code in Fusion and make sure you have the offsets set to 0. You also need to request the import g-code function from inventables if you haven’t already in this thread. [NOW LIVE] [new feature] G-code sending through easel

First, I import the g-code using the import/g-code menu in Easel. If the file is accepted as a legitimate easel g-code file, it will show up with toolpaths in the view screen (which will look different than the normal easel viewing screen).

I’ve figured out from the forums and experimenting, that you can set you zeros to where ever you want, just set the bit at that location and the g-code will work right. Even though easel wants you to set the zeros at the bottom left corner on top of the workpiece, you don’t have to set it there.

Then go through the CARVE menu on the top right like you normally would in easel. However, the bit size and work dimensions aren’t going to change what you have set up in easel as far as I can tell. But, most of the time I change them to match what I put in Fusion. You need to remember that changing say the thickness of your material isn’t going to change the g-code so if in Fusion you said your piece was 0.75" and in reality it is 0.77", changing it in the CARVE menu isn’t going to make it carve the extra 0.02". I may be wrong on this, but this is how it seems to be for me.

Then continue with the CARVE menu and raise the bit, start the spindle and hit CARVE. This has worked many times for me, including some 3D carving. I also just cut the candy dish that is in the projects page at the top of the home page. It is a g-code import and it worked perfectly.

If you have any questions, I’ll try to answer them. There are tons of people on here that know way more than me, so if I’m wrong about any of this, I’m sure they will correct me.

I have a big project going non now. Will try this in the future.

Yes, you need to edit the settings of your Setup-folder where you have your tool paths:

Right-click Setup1, Select box point and click on the point you want for zero.
Center stock point is default, in the screen shot I have clicked on lower left as work 0. 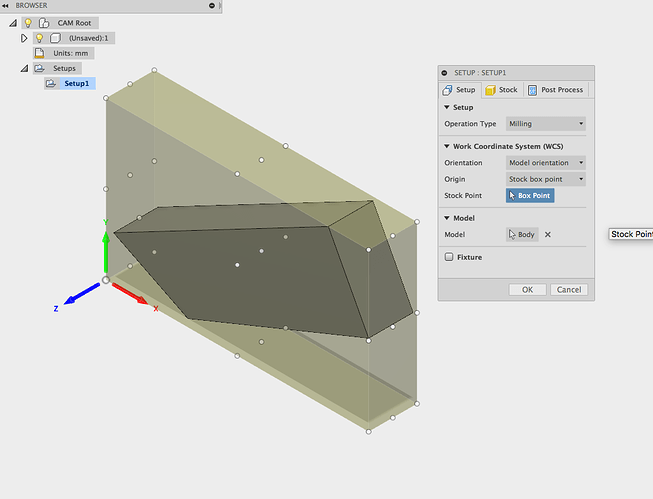 Thanks a lot. I’m going to try it for the next carve. I’m sure it will put me on the right track.