How to take a mesh model and create tool paths. Any VCarve users that could help?

Hi, I’m trying to figure out how to take a downloaded mesh model, and do a carve.

My first plan was to load the mesh into Fusion 360 and pull a t-spline box around it.
That failed, seemingly because the mesh had a lot of detail and a lot of defects.

I’ve spent a LOT of time trying to perfect the mesh with various tools, but
haven’t really gotten anywhere.

I downloaded the MeshCam trial, and that seemed to work with almost no effort.
This seems to be MeshCam’s primary purpose in life, so before I spend around
$250 on MeshCam, I wondered if VCarve could do it, since I’d rather spend $350
on a general purpose CAD/CAM package than $250 on a single-purpose package.

I’ve download the VCarve trial, but it looks like the features for importing a mesh
and creating a tool path are disabled in the trial.

So, I wanted to ask VCarve users out there if VCarve could do this?
I’ve attached the mesh I’m working with, it’s for a Pinewood Derby car for my son.
Maybe someone can import the attached mesh, and see if they can easily create a tool path.

If there’s another tool, or process out there, feel free to let me know about it.

i’ve trying to do this on inventor and fusion 360 since last week
glad to know that you’ve found a software capable of this.
i will folow this tread.

EstlCAM can can do this also.

@TonyNo Thanks, I’ll give EstlCAM a try.

@RaphaelPascual It looks like Cut3d from Vectric also does this, and may have a richer feature set than MeshCAM, but I’m not sure. it costs a bit more though.

The Vcarve trial will import STL (3D models) but it will not generate a tool path for them, or any projects except the few designated sample projects.

@AllenMassy OK, so now I’m blushing. I must have tried 8 or 9 times and never realized that the reason the import menu was disabled was because I hadn’t hit the OK button at the bottom of the screen. Thanks!

@JoesephSmith Thanks! I can import it with the trial now also.

It takes a little practice to figure out how to orient and size the object. 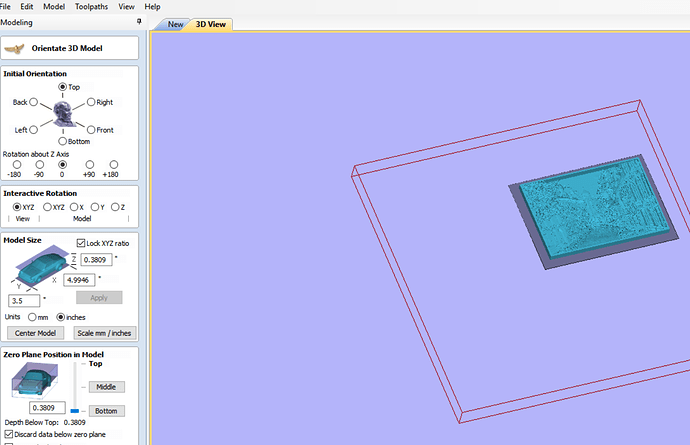 When it first imports it is not going to match the size of your work piece at all, so look at the model size and set the Z height to a little less than the thickness of your wood. Be sure the Lock XYZ ration is checked and click Apply, then click center model 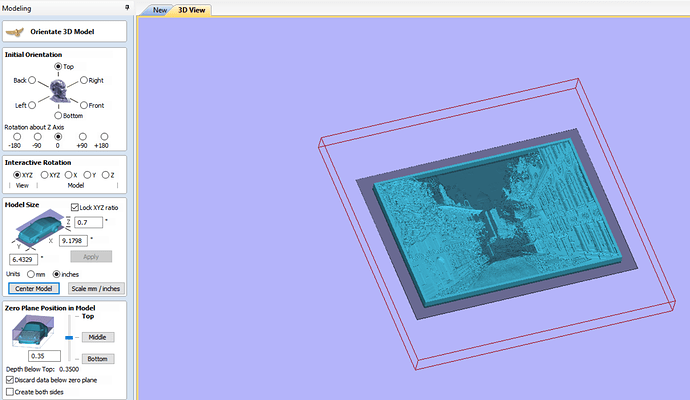 Now you will want to position the model in the Z axis, so click the X axis in the upper right of the screen to see a side view of the object in your wood. 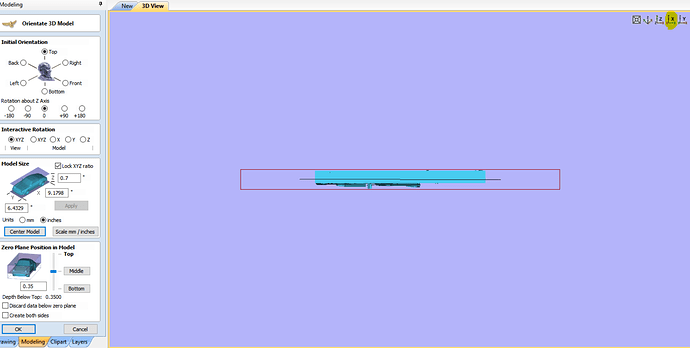 I generally place the object in the middle and uncheck the “Discard data below zero place” check box.

Then when you are happy with how the model is positioned just click the OK button.

Then you can generate a 3D finish toolpath with a relatively small ball nose bit (I used a 2 mm bit in this example) and preview the carving to see if it is what you expected. If so then you can begin building a real toolpath with a roughing pass and a couple of detail passes.

Thanks a ton @AllenMassey for the details! I was able to build a toolpath with vcarve and preview it.

@TonyNo I was also able to do it with EstlCAM, which is only $50.

I have to say though, vcarve is much nicer, and something that I’ve been thinking about buying for awhile, so i suspect i’ll be buying vcarve soon.

Too bad they aren’t having a holiday sale or anything.