I can't even import text?

I have to be stuck on stupid today because I can’t even import an image with text in it without it looking like a third grader drew it. (No offense to third graders). I made it in PS and exported it as a jpg and I can barley read it after Easel is done with it. I have AI but had a time with it so I fell back on PS. What am I missing?

Don’t use photoshop. Photoshop is for Pixels, AI is for Vectors.

Also let us know what the issue your having with AI is. I use it all the time so should be able to help.

Thank you gentlemen. My initial issue in AI was that I wasn’t smart enough to “fill” the background black so I would have white text. It wasn’t AI per se, it was me. I couldn’t remember how. For the life of me I can’t save as a SVG file that Easel will accept. I didn’t even think about PS being pixels and AI a vector. I knew it, just wasn’t thinking. I really appreciate the help. I need to figure out how to save the file in a SVG that I can use. If you know of a step by step or a video I can refer to it would make a big difference in the way I do this.

Can you upload the SVG here that you where having issues with so I can take a look at the file?

My best guess at this point would be that your text is still text in AI. You need to expand it first so that it is actually a vector rather than a text element.

This is simple to do. You need to select your text in AI and then click Object -> Expand. You will then get a pop up box just hit ok the defaults are ok. Save it again and try uploading to easel.

I understand your frustration. I do allot of Web design and posters and always used photoshop. Been using it for 10 years now. Just recently started using illustrator because of the cnc and I ca say it’s taking a while to get used to.

If you install inkscape, it can fix up the svg so that it will import into Easel. This will fix most things apart from embedded images ( JPG’s etc )

If you’re comfortable on the command line, the following will work. You’ll need to make sure that inkscape is on the path.

Well I cheated a little by just going to a site that converted the text to paths for me and ran it that way. That buys me time to do the things you suggested. I hit a snag after I changed the bits for the second pass. As you can see in the images, after almost 4 hours with a .250 bit the 1/16 inch bit was off enough to hose the thing up.
I know you can’t be absolute in saying but what would cause it to be almost an 1/8 of an inch higher than along the Y axis than the first pass? What is most likely? I homed it exactly. (I think I’m kind of anal about this process) and even after aborting the cut it came right back to home. On the spot.
So to keep from changing bits I just set it to cut it all with the small bit. It will take a lot longer but I need to get this piece out in the next couple of days.
Thank each of you for your help and suggestions. I don’t know what I would do without the support here. 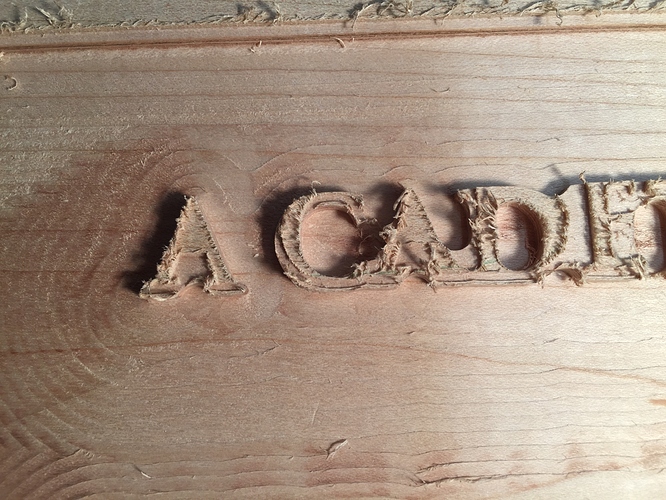 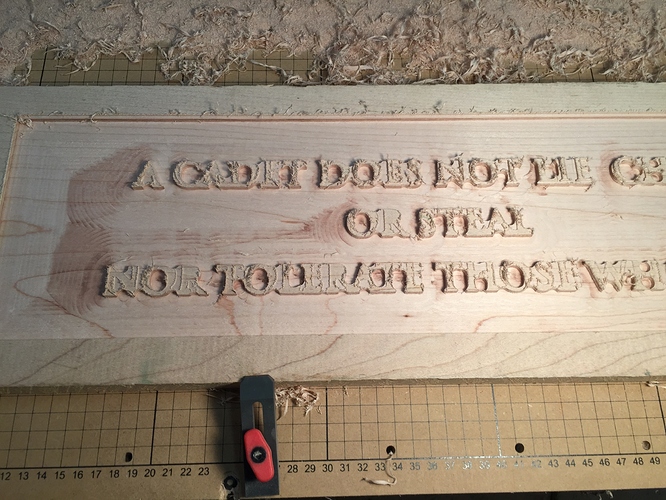 I reset it completely (which is what I think you’re saying). I always make the first bit score the wood just enough that I know exactly where home is. Then I change bits and “re home” it again so that it begins exactly where the first bit was. I have a Z Probe but haven’t used it because I haven’t flashed the new software patch yet. I have attempted to change the bit without moving the X and Y but it never fails. I do something to change it’s position. This has worked for me so far. I just didn’t know if there was anything that stuck out to y’all that I should check.
I allowed it to run all night and only got to 83% complete. I couldn’t leave it running while I am at work so I paused it. I hope and pray it picks up where it left off.

So when it finishes the first pass and goes back to the bottom left hand corner (where it was when I hit the “set home Position” button), you can change the bit and never move it along the X and Y axis? Just the force it takes for me to break the collar loose I move it some.
So if I understand you all I need to do at after changing the bit is lower it back to the material and instead of hitting the Set home position button just hit the other button and carve?
I promise I’m not this dense (usually) I guess I’m missing something. If I don’t tell it where to begin after I put in a new (shorter) bit, then how will it know? I’m going to go look through your video’s and see if I can find something on the subject. Thanks Phil.