This is a laser cut electronics enclosure with all the bells and whistles. I wanted to share and get feedback. I call it the FluxController because it looks like a certain movie prop from a certain movie. I haven’t finished the wiring but the parts are there. If you have access to a laser cutter then feel free to get the drawing over at thingiverse. I didn’t post this in projects because it’s not made on the X-Carve.

Let me know what you think.

I couldn't wait for the new X-Controller to come out so I made a laser cut case for my X-Carve electronics and I added a lot of the options to the base. The relay is internal and has two plugs with separate switches which allows each one to either be... 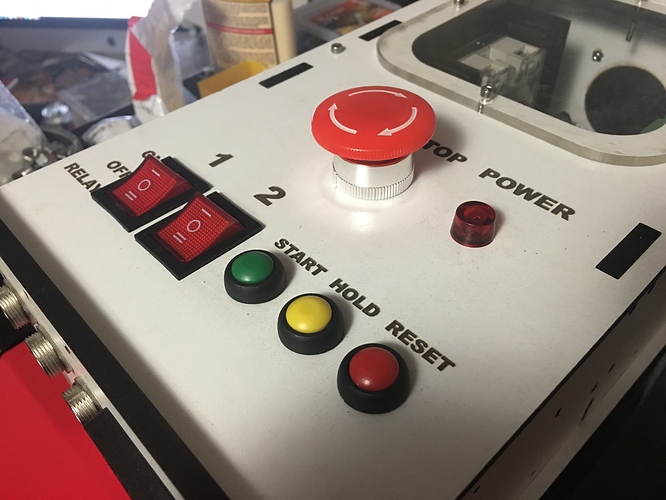 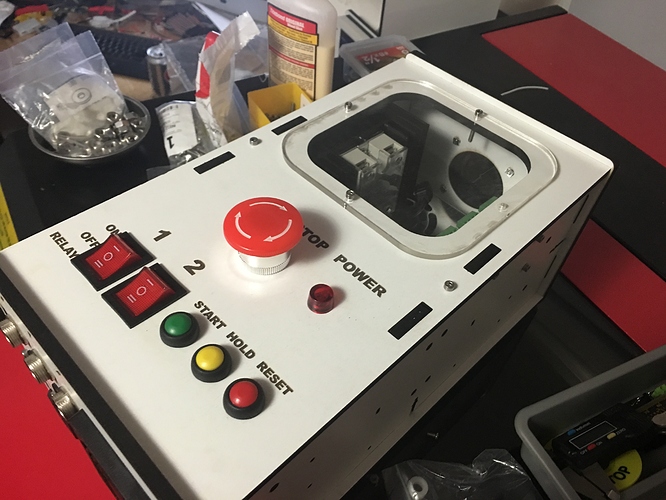 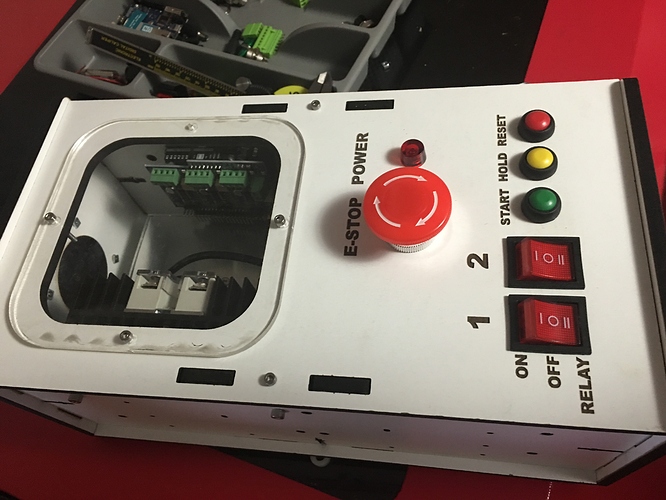 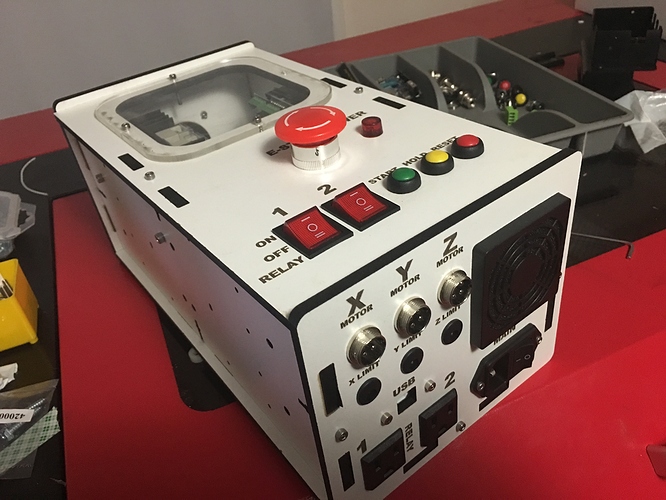 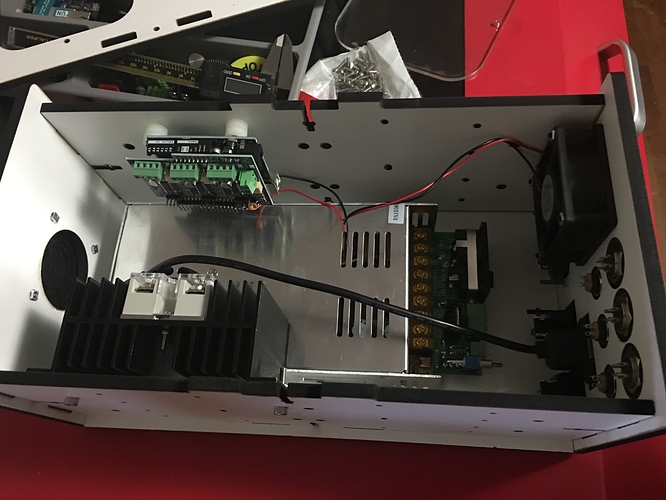 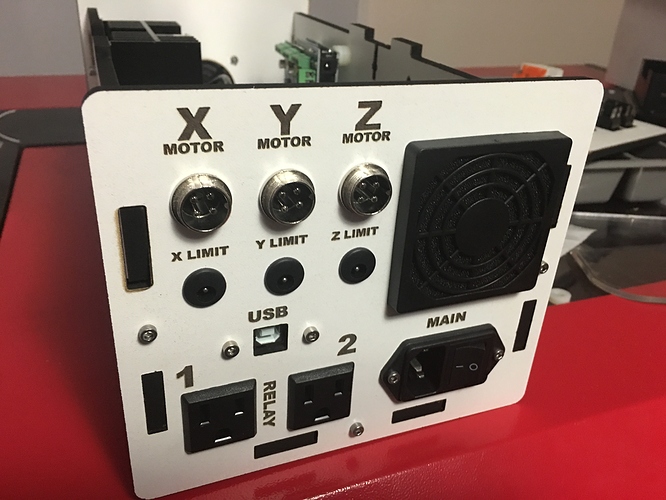 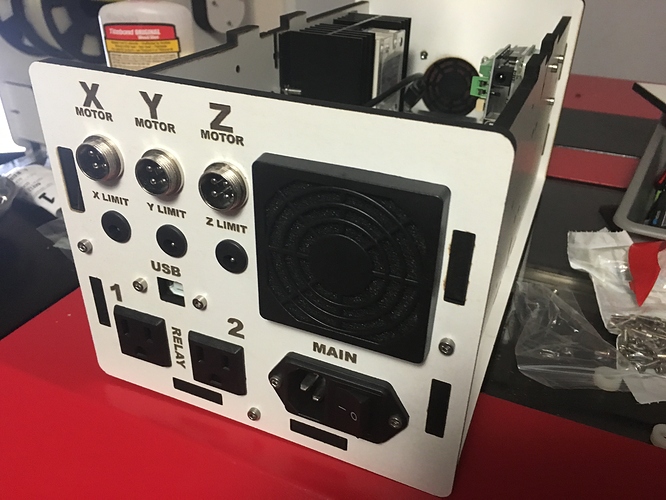 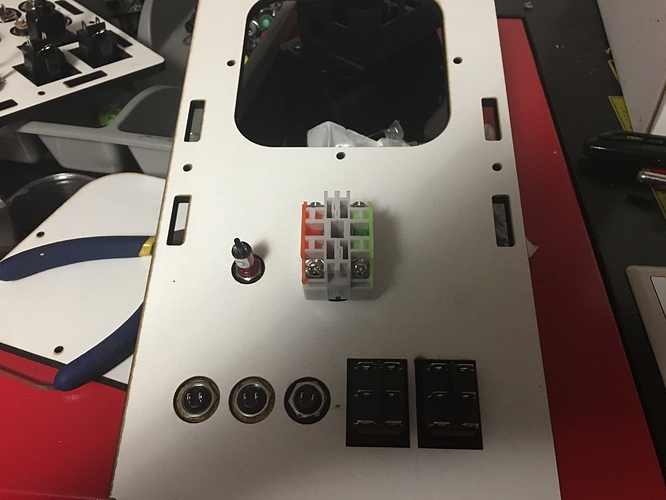 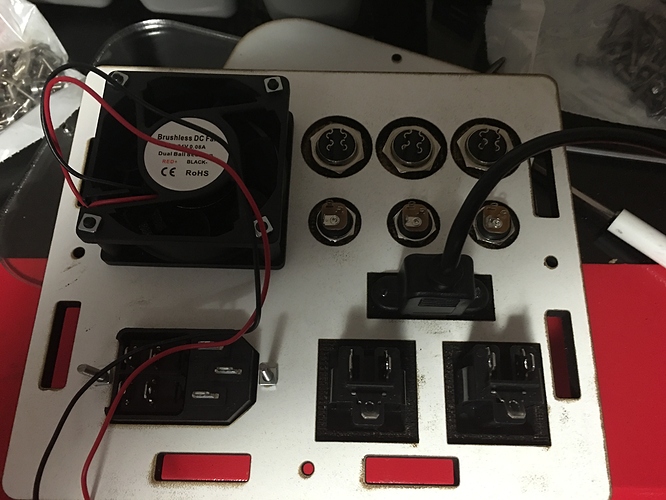 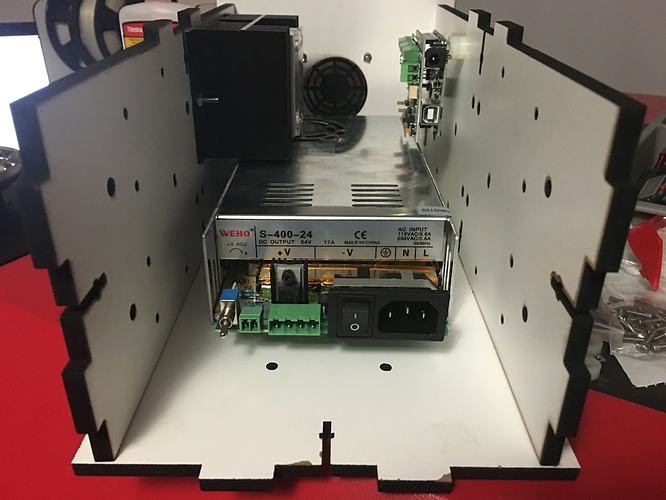 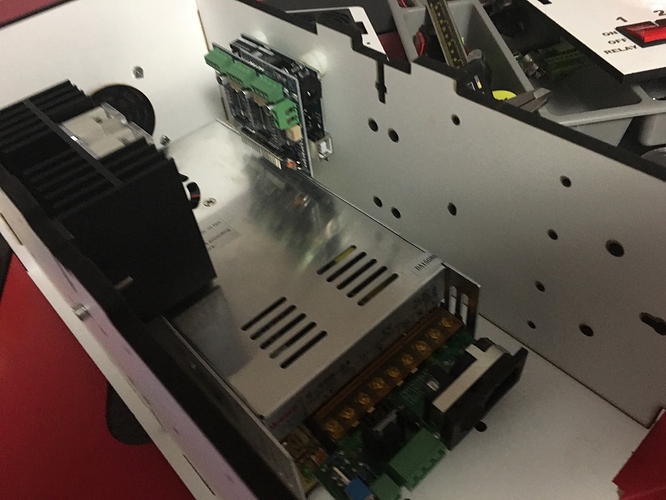 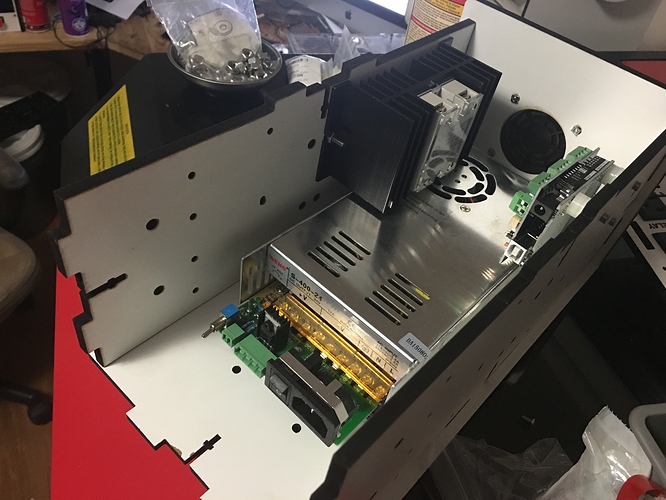 Would you mind giving a cost breakdown for this? I’m very interested in seeing the cost of something homegrown versus the eventual cost of the X-Controller.

Such a great build! Loving the homage to Back to the Future.

Now we’ll need to see more pics of it wired to the machine and maybe with a few LEDs inside in an upside down Y.

What a great job. One thought I had when I looked through the pictures is that you may need some directed air flow around the gShield. With the power supply under it and the SSR heat sink close by, that end of the box might get too hot.

Keep in mind this is more of an “x-enclosure” than an x-controller, because the x-controller doesn’t use the gShield, it uses 4 stepper drivers (two separate Y axis drivers) so it can deliver a lot more motor power.

For the gshield, you want to orient it so that heat can flow vertically i.e. the tunnel created by the shields should point up. See this, section about cooling https://github.com/synthetos/grblShield/wiki/Using-grblShield . Orienting the tunnel up will allow convection to move the hot air out of the tunnel, rather than it getting trapped.

@JustinRobbins
This is all the current gear for the X-Carve. GRBR shield, Arduino, power supply and the SSR with heatsink. So there is that cost. Then the laser cut parts and about $50 of switches, connectors, buttons. It’s best not to consider it a replacement for the X-controller since the X-Controller is all new hardware and not just a pretty box but it’s my way to add as much function and aesthetics to the current controller as I could.

@paulkaplan
I originally wanted to call it the 9-Enclosure.

@Andy4us
I thought about the cooling and I read that part on the wiki about cooling the shield. My original idea was that the fan on the front is blowing air from the front to the back over the arduino but after putting it together I’ve found two problems. 1. it seems to be too far away for the fan to really be pushing enough air over the board and with the arduino stack on the side the connections are really tight. I’m currently designing a way to add another fan and turn the arduino to make the connections easier to work with.

UPDATE: I added a version 2 where I rearranged the buttons on the top and moved the arduino mount to directly behind the fan so it gets the maximum air flow. I also moved the fan on the back up and to the right so it’s inline with the front fan and above the power supply so another fan can be mounted there to move even more air. I also added another view port over the new arduino location so I could see the indicator lights. 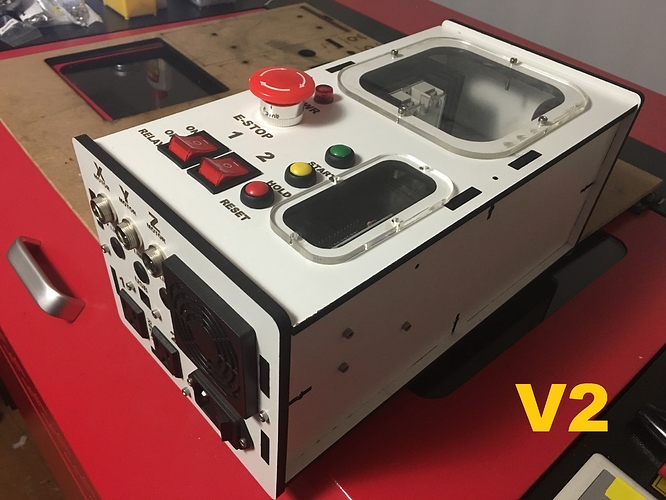 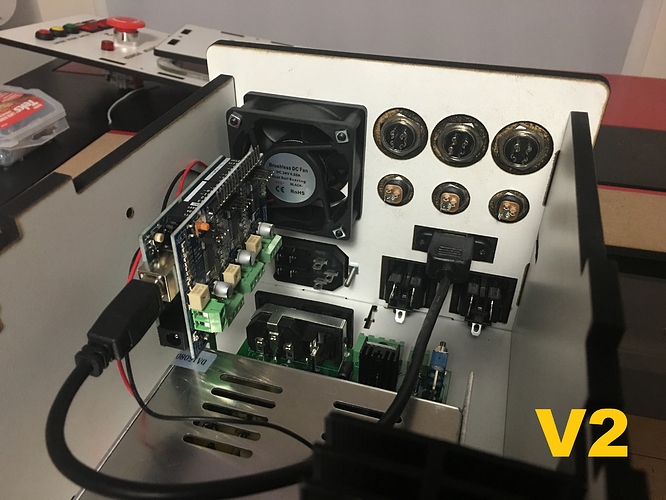 You having any thoughts about supplying a parts list and selling the enclosures?

I built mine into an old PC case. I added another small ( ~ $9 power supply) for the 12V fans. When I wired the E-Stop in, I only put the 24V stepper PS through it. The idea was that in an E-Stop situation, the fans would still be working regardless of the state of the 24V side. As things stand, I still need to get everything nailed down in the case. We have opposite situations. Mine is working and wired, but not pretty. Yours is pretty, but not wired and working

I suspect yours might be pretty, working and wired before mine is pretty !

Honestly on V2, I would flip the uno so that the USB faces the fan and the motor connectors are at the top. Easier to get the cables in, and you can loom the over the top of the fan and around. I also added one of these, http://www.adafruit.com/products/196 , in order to make attaching the homing switches, although I have yet to do that. Also, since there is a proto area, you can build the low pass filter for the switches right on there.

I would be willing to sell the laser cut parts for $50 plus shipping (flat rate in USA would be $15) but it would be a little more difficult than just shipping a set. Since button and switch selections might change from person to person I would want people to order their parts and then once they get them all ship them to me and I’ll size them and modify the dimensions to make sure it all fits. That way if someone doesn’t get the exact same parts I can customize it for them. Unless someone got all of the exact same parts as I did then I would have no problem sending them the laser cut parts without them shipping the parts to me first but I would really prefer people get the parts before having me make a set for them. Nothing worse than getting halfway there on any project.

Please note this is a truly open source design so all the files are on thingiverse so if you have access to a laser cutter my feelings wouldn’t be hurt if you make one for yourself. That’s the point after all

(they will be if you sell them though)

If you want one send me a PM so we don’t clog inventables forum with useless sales post.

As for the parts list I got mine off eBay except for the arduino, GRBR, fan, power supply and the relay which I got from inventables.
http://www.ebay.com/itm/221806522025

Find many great new & used options and get the best deals for AC 125V 15A US 3 Terminals Panel Mounted Snap in Power Female Socket 2pcs at the best online prices at eBay! Free shipping for many products! 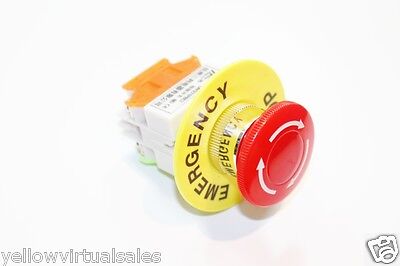 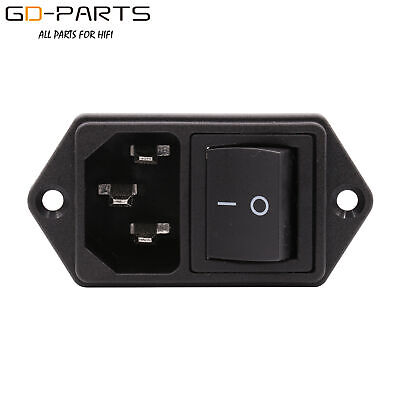 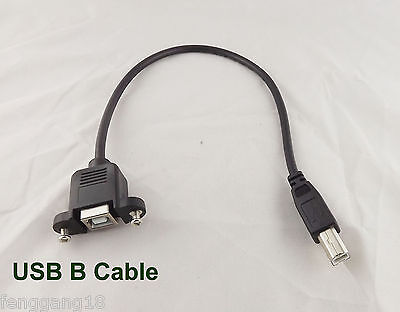 Thanks, Charles. Lot’s of options here.

Here is the box all wired up and running now. I seem to have some noise with the relay so I need to troubleshoot that but it does run. http://youtu.be/vtSNT-Wg3nk

in the video the Y movement doesn’t sound too good…

Edit: When you jogged it it sounded like it was fighting to move. In the homing sequence it wasn’t as bad, but it still makes me wonder about the smoothness of the movement.

That enclosure is top notch! Looks like an equipment module taken straight out of the space shuttle.

So I got it all wired up and running but I keep having EMI problems so I will end up having to rewire it and do some new work to reduce the EMI. Other than shielded wires and EMI filters on all the AC power does anyone have more suggestions?

Have you tried grounding the chassis of the switching power supply, that should solve most of the problem.

Looks Great! I didn’t see it mentioned anywhere (might have missed it), what material is the enclosure made out of?