I cut my first record today, am I a star?

I have a single straight that I was going to try but, after seeing Glenn’s initial post and his statements of positive outcome, I figured I’d give the same but a try.

I saw a youtube video, don’t remember where, of a guy who used a straight bit, cutting in 1 pass, and going slower than 200 ipm. Don’t know what his was set at but it was noticeably slower.

As for a source of records, I get mine from Good Will. $1 each.

I’ll have to try it again and see what happens.

By that, I gather you haven’t done record carving in awhile (I know this was an old thread). No big need to retry if time does not cooperate.

yeah idk I am just not a fan of straight bits

why use the v-bit to cut this out?

For me a V-bit on thin plastic sheet give me a bevelled edge and tight inside corners.

Video (just casual carving 2mm acrylic sheet, nothing extreme in any sense) :
This is with acceleration at 500 and max feed rate 3000 for Z 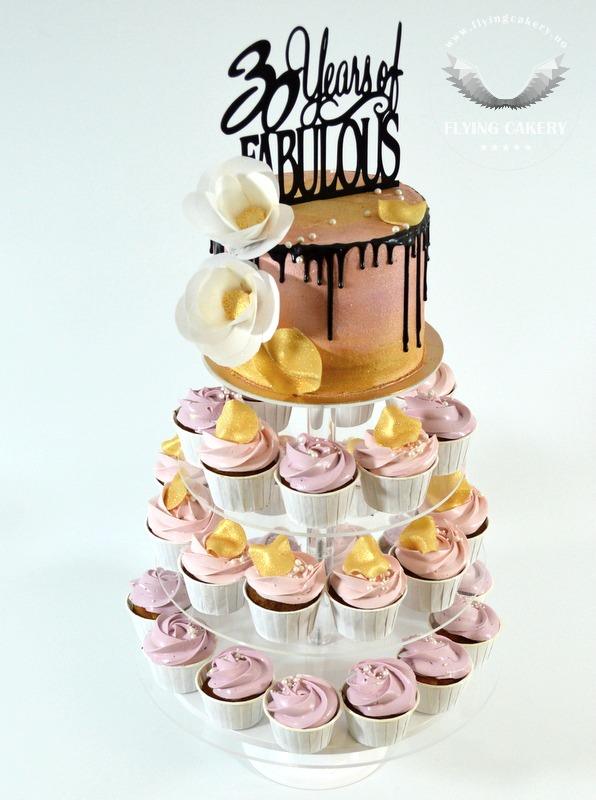 You don’t need the speed any higher than 1 for plastics. 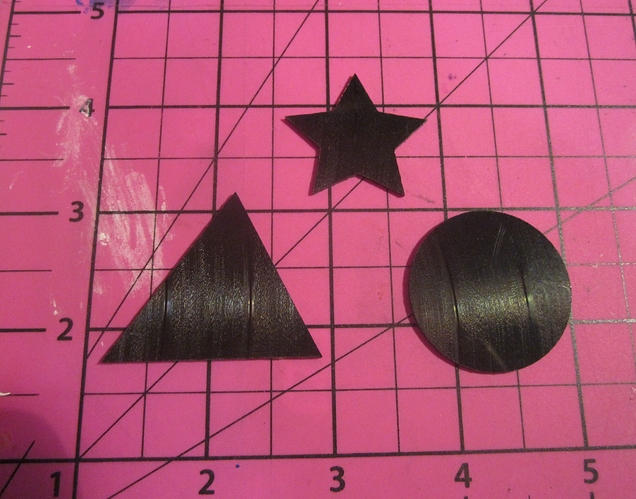 hmm very nice is the monogram ready right off the machine or do you have to do anything to it after you cut it out?

Here is what the above cut looked like right of the machine, all I did was run my fringer’s around the edge

hmm very nice is the monogram ready right off the machine or do you have to do anything to it after you cut it out?

For these particular jobs I run the carve twice, one with incremental depth per pass then a single full depth carve (to same depth as first). After the first carve the groove is usually packed with plastic chips (v-bit dont clear much) but when I run the carve for the second time the cooled plastic clear really really well.
So yes, the monogram is pretty much ready to use right off the CNC - but since it will be placed on a cake I do make sure they are 100% clean of any trace of unwanted material.

With a 1/8" V-bit I usually run at 1500mm/min at 10k rpm with depth per pass 1.1mm (convenient since max depth is 2.2mm). I can run much harder and at full depth but intricate parts and thin design elements (1/32" wide) make it cost effective to run depth in two stages and at slower feed rates.

are you using tabs to hold it in place or do you cut without tabs?

so I am curious and you dont have to

but would you share the file for that cake topper that you made? just looking for a svg or dxf file

Sent you a PM WW.

Have not tired straight flute yet. Was about to then I realized I have one of these so I figure I would give it a try - https://www.inventables.com/technologies/solid-carbide-single-flute-upcut-end-mill

I know the bit is slated for “soft plastics”, and I am not sure if vinyl record is considered soft but I was curious.

I ran one at 100 and the other at 75 ipm. Both cut full depth at one pass. Between the two, I can’t tell a difference in speed settings. Both did very well. There were some stuck-on chips but they wiped off easily with my finger (being careful not to cut myself on the sharp edge). 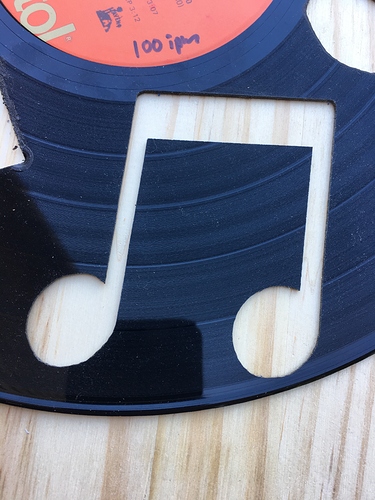 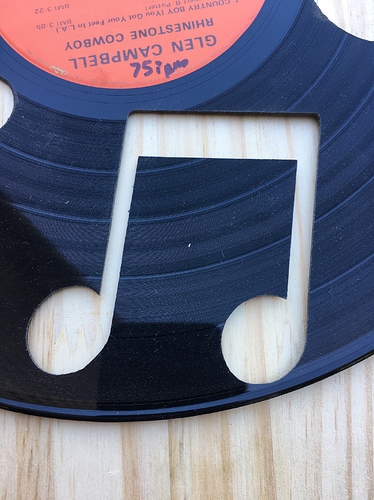 I will try a straight flute and post those results but it maybe not be today.