I did it! First carve came out better than expected!

It took me the better part of 2.5 days to finish, but I got my 1000mm X-Carve put together and calibrated just in time to tempt fate (and my wife’s wrath over the noise) and run the test carve. Overall the build went pretty smoothly, though I do still have to finish setting up the limit switches – I was too impatient to make it go tonight.

The biggest mistake I made was over tightening the screws on the DW611 mount and stripping the threads out of one of the holes. I feel like the screws for those holes should be 12-16mm instead of the puny little 8mm ones to let it grab threads before it has to deal with clamping. To be fair, the directions do have a warning about those threads, I just missed it until too late. A quick trip to Home Depot for longer screws and nuts and all is well.

Thanks so much to the incredible community here that is generous with their time and knowledge. I’ve learned so much the last few weeks just reading that I felt pretty well prepared to deal with the most common problems that crop up. Felt pretty good when I knew to bump up that Y pot when it wasn’t working quite right. 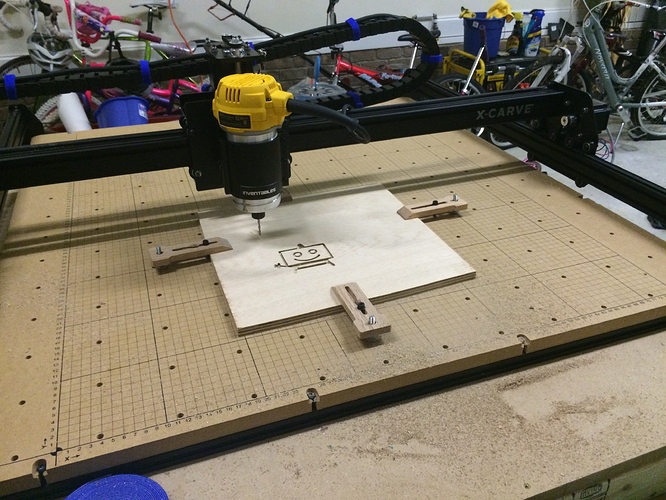 I see what everybody means about the DW611. I freaked a little bit when I watched it dive into the material for the test cut, but it chewed through the scrap plywood I was using pretty easily.
Next up is a dust shoe. Because wow that router throws dust all over the place.

I just dropped the router down low enough that the button is exposed under the mount. It trades off a little Z capacity, but I’m not sure if that’ll matter yet. I did see a clever approach in the big Dewalt thread that has tapped hole directly above the button with a thumbscrew to depress it. If I need the Z space back, that’s probably what I’ll do.

I used the same method, so far I haven’t needed that Z distance. If I do, I will most likely just cut a pocket in the mount. Would be nice if it came that way, but meh.

I moved mine down so the button is just below also. So far it has not been a problem, plenty of Z axis.

Mine is also the same, the button below the mount. I am not sure how much Z-Axis movement is really lost…if any…I’d have to measure.

With your 611 spindle lock button just below the mount, did you have to shave any of the top of the router to get it to fit at the top? Or does it fit just fine with the 611 mount as is? I seem to remember some folks shaving a part of the plastic housing flat to make it slide in nicely.

I never needed to shave the router. It just has to be in the mount at the right angle to clear everything.

I used nothing extra, and the router does not hit.

Yeah i have my 611 mounted so the button is just below the mount. You can also raise it up and use the lowest accessory hole to push the button with a small rod.

I don’t have any issues with clearance with the router, it does barely touch on the top by the Z-axis belt, but not enough to matter.

I have a air-diffuser attached so it does keep dust from going everywhere but still needs dust collection. I have some of the loc-line to build a mount later tonight on the 3DP.

Also got the collette from precision parts, VERY VERY well built. I play to do some PCB and wood milling with the 611. Hopefully i can stick with this one spindle