I got a new laser (Opt Laser set up)

I was going to use the old power supply from before I upgraded to the Xcontroller and picsender… Does anyone have any thoughts on how you would wire this thing? Below is the connection tab that was supplied. I have no idea what this stuff means or where it should be run to.

Remember, I have no idea what symbols or terms mean so if you offer suggestions, please speak slowly… 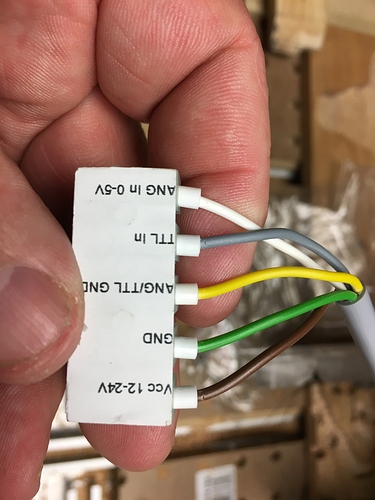 My problem is I that I have zero education in electronics and have no idea how to hook this thing up.

It didn’t come with any instructions?

Hope this helps. it really doesn’t appear to be to complicated.
P.S. you would only need one type of control voltage in. Choose either Analog or TTL to supply control voltage.

Yes it did. My issue (incompetence) is not knowing how these wires get routed. Although it tells me to hook this lead to that output, I have no idea what “that output” would be. I’m looking at my power supply and see nothing with these abbreviations to match it to. My issue is that I’m afraid of hooking the wire to the wrong pin or screw and melting my brand new laser. For someone with an electronics education I’m sure it is quite simple. My life has taken down different paths and knowing what a TTl or ANG was not in my wheelhouse. I just don’t know where to put the wires.

Thank you, sir! I will research and see what I can come up with.

I don’t know what laser you have, my alternate wires beyond vcc and gnd were labeled for my chinese 40w on the power supply. So, not certain without knowing what laser it is.

Thank you, sir! I will research and see what I can come up with.

Basically 12-24 volt positive and ground from power supply to power up the laser (and laser driver)
then also 0-5 volt control voltage in either analog or TTL to control how bright or dwell of the laser (control) both of these share a common ground.

Just had to make me say it, eh? 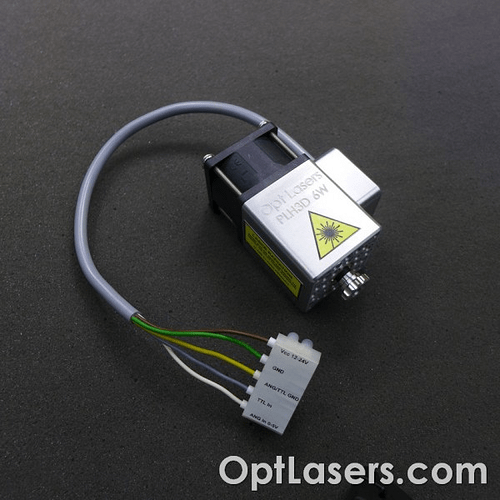 Looks like you will have to break out the wires and put them in the proper places. Doesn’t seem like TTL is used.

So now I am VERY curious as to how this unit works out for you as a newbie.
customer service etc.
I’m a newbie too and would eventually like to work my way up to a laser.

That is it exactly!!! Except…I have a 5th wire. The TTL In. Any thoughts on where/if I should attach?

When I’m up and running I’ll throw out a wrap up of my experience. It will be fodder for some, useful for others.

It doesn’t appear TTL is used.

just be careful, looks like they mapped the laser’s brown to a red wire, the green to black (seems straightforward positive and ground), then in the pdf they made what was yellow to white as ground, and mapped the lasers white to green for pwm connection.

I have the docking station. There is a separate diagram for routing the wires. I’ve been going over that numerous times to make sure I’ve got the right ones connected. I guess first power will let me know!

wel the worst that can happen is it becomes an unengraver.

Have you tried reaching out to their support? I would hope they would be able to help you get it sorted out.
I’m curious how you like it as well.

That’s an interesting module.
Hooking it up should be easy. It has 2 modes. TTL or Analog.
If you talk to the company that makes it I am sure they can help you a great deal more than most of us here.
As far as TTL vs Analog. Here is what I am familiar with.
TTL (Transistor - Transistor - Logic) is 100% on or 100% off. Much like you get out of any micro controller’s digital pins.
Analog is a change from 0 to 100% voltage. It can be a any voltage in that range.
The X-controller can do both. You just have to decide how you want to drive the laser.
(Note: the older controllers can do both as well.)
There is a frequency that you drive the module which causes the laser to pulse. The manual should have that info.
Just looked at the website and they have a page that explains how to set this up with Mach3 The info there will tell you how to set it up with the X-controller as well. Here is the page: http://optlasers.com/support/mach-3-configuration-for-engraving-laser-head/
Talk to the company about properly driving the module requires. Also find out if you leave the pin you do not use floating or if it needs to be grounded or pulled up etc…
Good luck.

Well, I think I have it wired in. I have to wait until later tonight on account of other obligations to actually give it some juice. I’ll post back with my results or questions. Thanks to everyone for their input and guidance!

Using the PWM output to control the power level of this laser is dependent on the version of grbl that you have installed in the X-controller.

The two versions of grbl that I know of that have both spindle and laser support are: the official 1.1f from Sonny and the 1.0c version that I produced. Both of these versions use 1KHz PWM.

According to the documentation on the laser, it will work with 5Khz to 10KHz PWM.

The Inventables grbl version 1.0c uses 8KHz PWM, but does not have laser support. You can use it for engraving, but not variable power work.

If you want to use one of the grbl versions with spindle and laser support on the X-controller with this laser you would need to use the 0-10 volt output to control the power of the laser.

You should verify that the laser controller is capable of using 0 - 10 volts before you use this option.