I need to identify what kind of material/plastic this is

In this video you can see they are using some sort of frosted plastic which transfers light very well. Does anyone know what it is? Could it possibly be some sort of acrylic or just regular transparent acrylic that’s been bead blasted?

There are quite a few kinds of acrylic that are opaque rather than transparent… Might be one of those. 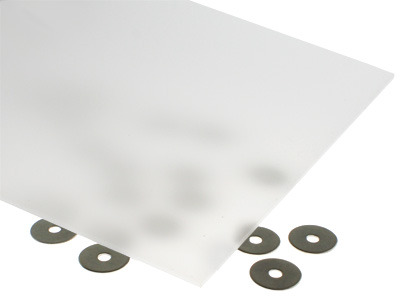 Cast sheets good for use in laser cutters

Are those opaque throughout, or are they just on their faces? It would seem blasting regular acrylic may work and be a whole lot cheaper. Unfortunately, I don’t have a lot of experience blasting acrylic, but I have a cabinet.

Isn’t that just regular transparent acrylic that they “frosted” with sandpaper? It looks like that’s what he is doing with the sander in one part.

I get a very similar effect doing that with clear LEDs.

I took another look at the video, at the beginning he’s using what looks like a vibratory sander on the stainless piece removing burrs I guess. Later he’s sanding the black acrylic which is sandwiched between the brass and frosted illuminated piece. I’m starting to think it’s acrylic that’s sandblasted. I believe the metal lugs contain LED’s and also serve as an attach point to the hull.