I searched for this in the forums, but couldn't find it. Acrylic buildup on bit

I broke yet another bit trying to cut acrylic. It was going fine but the acrylic kept building up on the bit. Then the bit broke

Is this just going to happen or is there a way to safely get the acrylic buildup off of it while in operation? The bit I used was a 1/16 fish tail 2 flute. 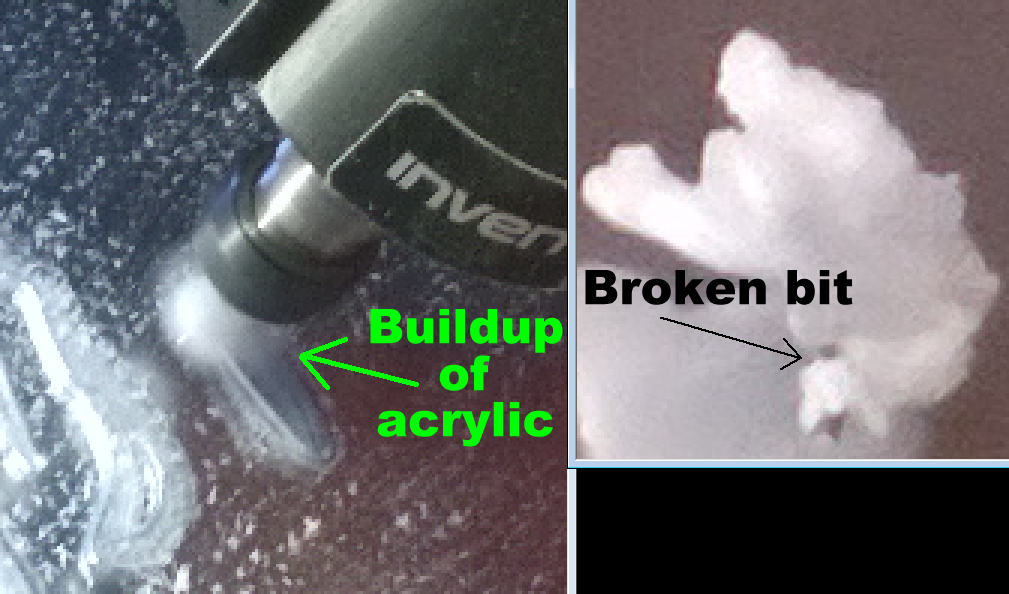 The build-up could be caused my melted acrylic, faster feed rates and shallower cuts will not allow so much heat to build up and melt the acrylic.

That being said, I have not cut much acrylic…just a few pieces.

There’s no doubt in my mind that friction is the culprit. I messed up a good sheet of mirrored acrylic trying this

I went with the default depth per pass and should have made it more shallow. I wonder if the bit I chose played into enabling the buildup. The design had fine detail so I tried to go with a small-ish bit. Ugh, I can’t afford to keep breaking all these bits (and acrylic) while I learn things the hard way

Bring the spindle speed down, increase the feed rate and do shallow cuts with a bit that can produce big chips.

The build up is purely heat melting the material onto the bit.

You may switch to down cut bits. That’s what I did for any Plastics. Lot better results.

You might also try cast acrylic. I’ve been cutting it without a problem - it is much more tolerant of the heat and melting issues than extruded acrylic.