I designed my sign in V-Carve Pro, where I specified a v-carve with a flat bottom at 1/4", and a 1/4" clearance tool.

For some parts of the clearance tool path, the cut depth was too deep. I checked the depth of those extra deep areas and found that they were .3125" exactly. I checked my code in V-Carve and didn’t see that number anywhere. However in Easel, if I created a new workpiece, that exact number was specified as the depth of cut. I’m guessing that’s not a coincidence. Bug? User error?

I should mention that my feeds and speeds seemed very comfortable for the job. Maybe even a bit slow. Definitely not too much. 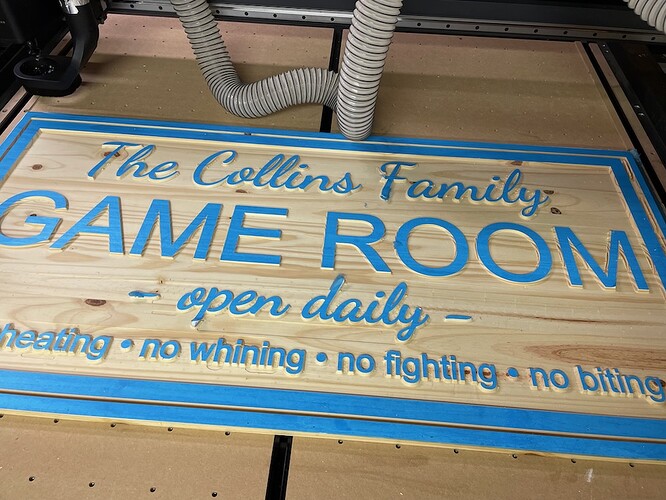 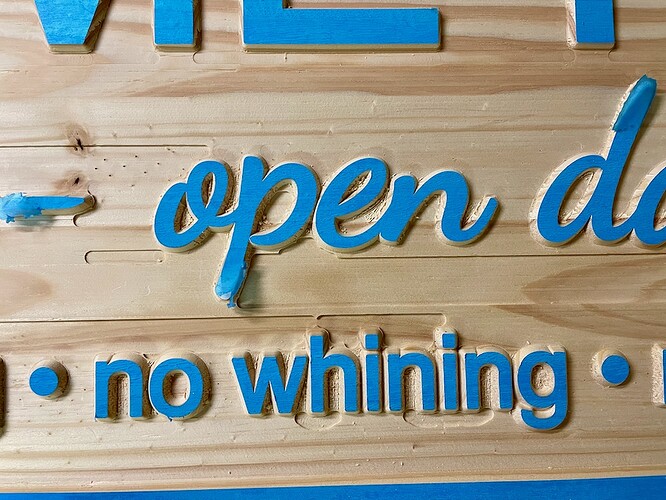 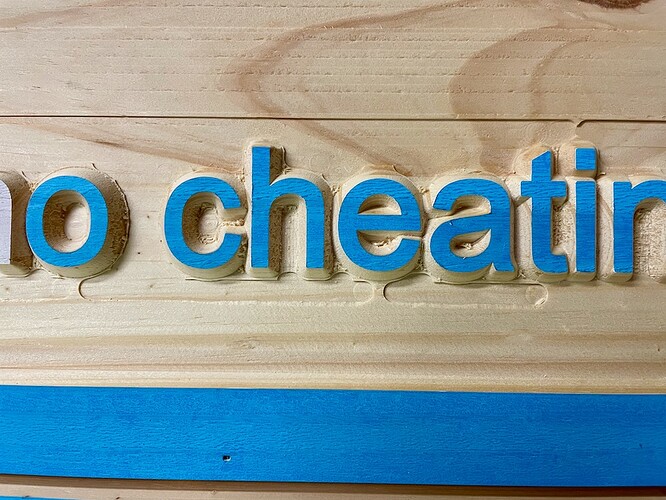 Did you zero out your “Z” in the same spot for both cutters? possibly use a different sender for trouble shooting?

All of the clearing was done in a single step with a single bit.

Also I’ve got a good trick for cutting with Oramask, we can cover once the other part is figured out

it works perfect every time

I think i would agree with SethCNC on the bit slipping. I have had it do it to me. I am also a Vetrics Pro user and the only time i have seen this is when the bit slipped.

Here’s the g-code. I doubt the bit or belt slipped. The bit was tight when I removed it, and all the too-deep cuts were done as the first stage of the pocket cuts after the profile cut completed. The machine didn’t sound like the chip load was ever high, and it never lost its position like I would expect if there was a belt slip.

You’ve got me curious about your Oramask trick.

Maybe you should create a new topic so it is easy for people to find that conversation. I know I’m hungry for all the tips I can get.

To start, I would Re-Order the toolpaths, the perimeter cut should be done at the VERY last even if that means an extra toolchange. Doing this cut prior can cause un necessary movement of the wood (it might be more prone to lifting which could cause issues with depth, likely not this issue, but still… best practices…)

You’re right, the deeper portions are all at the beginning of the carve… you might have had a z zero issue to begin with making stuff deeper than it should be and then a bit slip back up in the collet OR belt skip a tooth while the Z is plunging down, resulting in the more shallow areas after the event.

IF you’re not doin so, its a good practice to remove the nut/collet and tap or blow out the sawdust. routinely and I suggest checking the belt tension on that Z axis.

Additionally when doing flat bottom pockets like this I like to set it up to do a thin final pass, this is done in Vectric in its own popup window and is pretty simple to setup. This is likely NOT the cause of the issue, but it’s a good practice in order to minimize the machine marks that are usually deeper from deep passes than from this thin last pass method.

Can you verify that he $1 is still set to 255 as well. It should be, but just as a sanity check, you might want to verify.

As for the Oramask method that I use:
I stain or paint, then apply a wipe on water based polyurethane, let that cure fully, for at least 1-2 hours. Then apply the oramask.
Then to cut it I start with the V bit doing a “score” cut using inside the line perimeter cut with a very shallow depth, like 0.3-0.5mm depth, just enough to slice the masking and a tiny bit into the workpiece.
then I swap bits to the endmill and run the carve as normal. By running the score cut I always end up with a very clean cut edge on the masking since it was adhered well and it was a solid piece, not already cut up by the endmill. using the endmill first makes it more prone to bunch up rather than slice it cleanly.

I hate to say it but I really think it’s going to be tough to clearly identify the root cause on that carve. only to check the Z belt tensioner, the pulleys are on tight (no loose set screws) and that the collet is clean and the bit fully tightened before each carve going forward. That’s about all I got

All appreciated. Perhaps just logging the issue on here will serve as a flag in case it happens again.

I like the ideas as well. Good thoughts. I ran my roughing passes as conventional instead of climb cut, so I assumed that was the reason the Oramask got pulled off.