Had a friend tell me his daughter was removing the wood covering from an 8’ x 20’ interior wall for remodeling. It was tongue & groove like flooring a little less than 3/4" thick. They were throwing it all in the dumpster and said I could have it if I wanted to go get it. He said the original homeowner whom was a woodworker told her it was teak. I thought yea, right.

Well, much to my surprise it WAS teak! It was toe-nailed like normal hardwood flooring leaving the top surface unharmed but the nails did come through the back as about 16" to 24" intervals. Also, most of the T&Gs were damaged in removal. But I am able to salvage most of it in 1 1/4" wide strips 5/8"+ thick.

Think it will work great for cutting boards. Mills very nice with no chip-out. The first project is to give him a personalized cutting board. Not bad as is but I think I will try a maple inlay of the carving to make it stand out more. 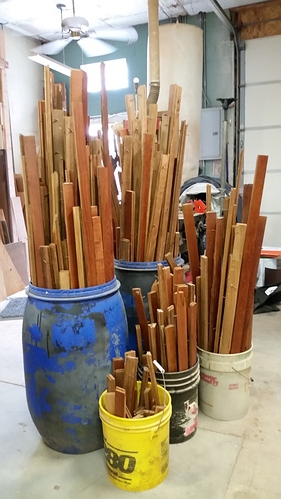 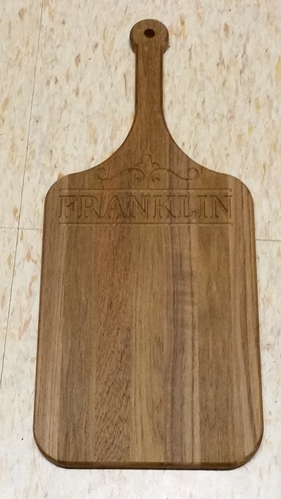 This is awesome! Great use as well!

Since teak has so much natural oil, it doesn’t glue up all that well, what did you use?

Since teak has so much natural oil, it doesn’t glue up all that well, what did you use?

I did three destruction test gluing pieces together and putting each in a vice and smacking them with a hammer. I was impressed that Titebond III preformed outstandingly and all three breaks were to the wood not the glue joint. I checked with a friend that does a lot of work with all types of exotic wood about what glue he uses. He confirmed when he is working with oily woods that either epoxy or Titebond III work well. He also said Titebond 2 and 1 did NOT work and the joints failed on a regular basis.

BTW - I did not wipe down the edges of the test pieces with lacquer thinner as some people suggest and still got a solid glue joint. But it seems like it might be a good idea anyway. Sure wouldn’t think it could hurt.

In the boat building world, we use teak all the time. The key to gluing it up is to wipe the mating surfaces with acetone (while wearing nitrile gloves) right before you use waterproof/resistant glue or epoxy.