Below are some early model renderings for the work bench I’m going to build for my 1000mm X-Carve. In addition to some of the features, they illustrate various potential color schemes. I’ll share the model itself when I get it all finalized so that others can make use of it. Let me know what you think…

Following are the bench’s features:

In this first image, you can see the round air intake opening at the bottom of the electronics cabinet. Though not visible, an exhaust opening is located directly above it in the cabinet’s “ceiling”. A 120mm case fan can be attached to either (or both) of these openings to provide air circulation. 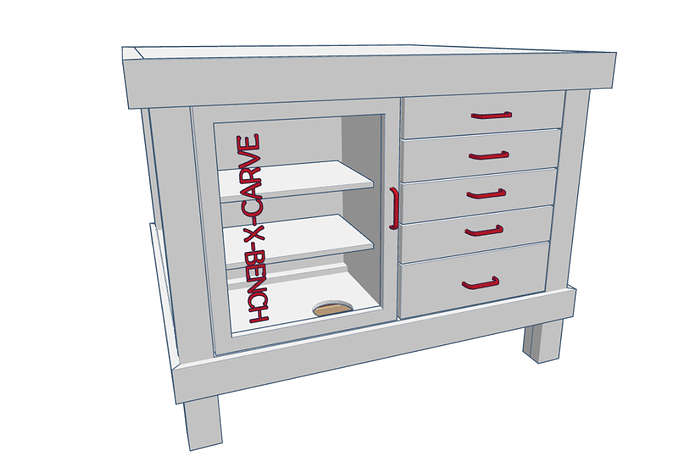 This next image just shows the bench as it would look mostly unfinished. 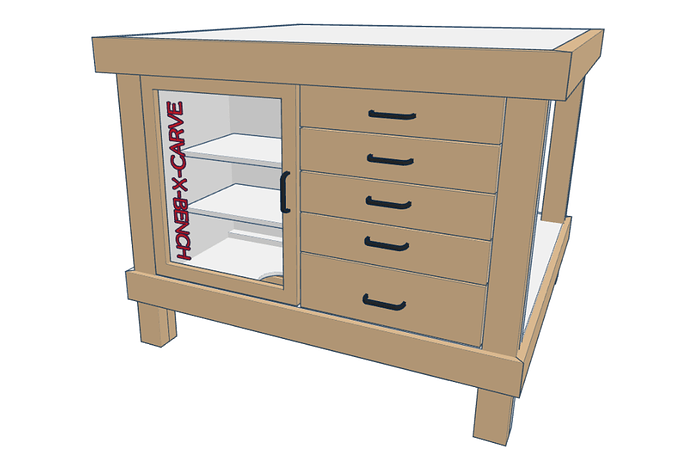 Another view of the same. Here you can see the air exhaust opening in the cabinet’s ceiling as well as the slot beneath the bench’s main shelf where the A/C filter will be inserted. 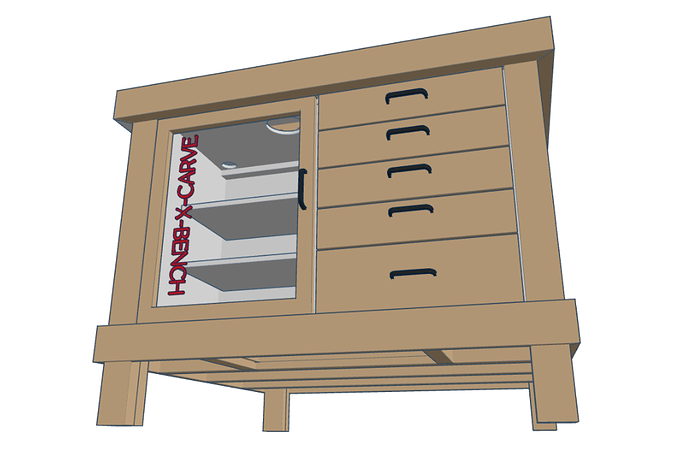 In this next image, the top board is removed to expose the underlying torsion box structure. At the front you can see the opening through which exhaust air passes from the cabinet below. Towards the rear you can barely make out the opening for end-drilling of boards. Eventually, this opening will be “isolated” from the rest of the bench top structure so that air cannot enter nor exit here. Again, an air exhaust opening still needs to be added to the underside of the bench top structure. 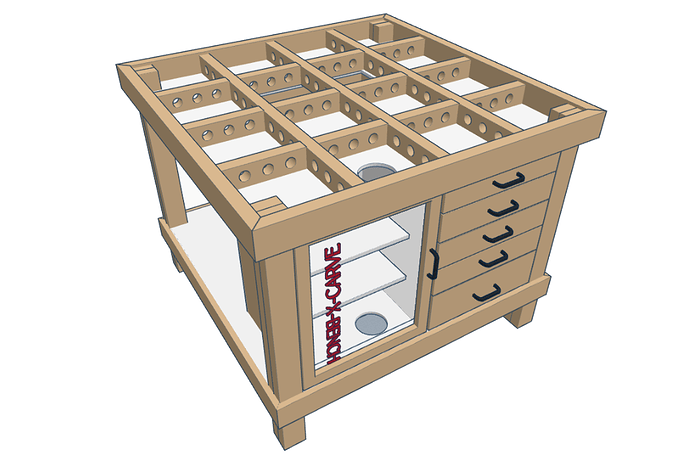 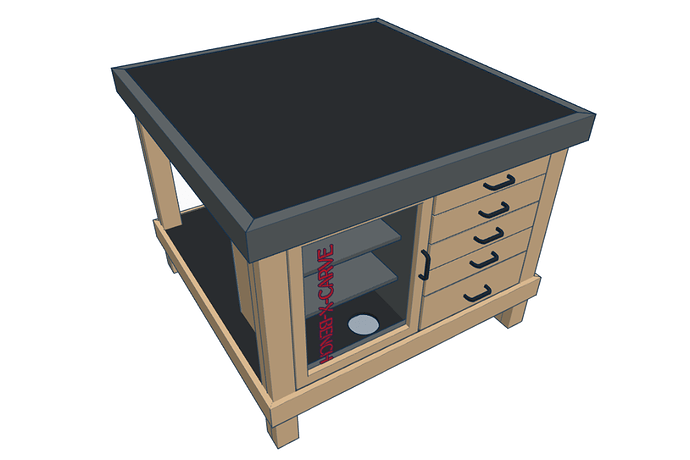 And finally, here’s a rendering with a solid cabinet door. Although I personally like the solid door, I think the glass front will ultimately be more useful in the end just because you’ll be able to more easily monitor LED lights or whatever. 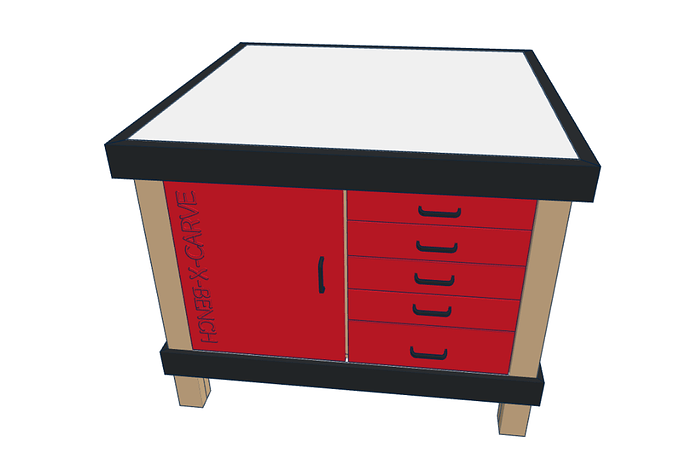 And when will these will be available at IKEA?

Lol! That would be one serious “flat pack”. The question in my mind is when am I going to get off my butt and actually build it?

The good news is I won’t have to do it all at once. The bench should be usable even before the cabinet assembly is constructed (which BTW doesn’t have a top or bottom to it – it only has four sides). The drawers, the cabinet front and a few other “add-on” parts could all be manufactured using the X-Carve.

It’s a good plan. I wish I had time to make something like that for mine XC!

Having just finished my new bench I’ll warn you that unless you redesign the Y drag chain or build the table bigger than the min required to fit the X-Carve you’ll end up wanting to run the cables through the top right about where the front left leg is. What saved me is that I used a plywood angle for the legs instead of a square wood leg.

That is very similar to the one that I have been working on, except mine is reinforced with metal at the top, the electronics section is LED illuminated, and the torsion sections are filled with expanding foam. I was also going to enclose the top of the torsion box to cut down on noise, but I am going to achieve that via another route.

You’ve put a lot of thought into your X-Bench. Great job!

Thanks for the feedback Steve. I guess I ought to include the X-Carve model to avoid such a problem, huh?

I’ll look into this. If I understand, you used two pieces of plywood per leg, joined to form a 90 degree?

Thanks! Hopefully it works as planned.

That is very similar to the one that I have been working on, except mine is reinforced with metal at the top, the electronics section is LED illuminated, and the torsion sections are filled with expanding foam. I was also going to enclose the top of the torsion box to cut down on noise, but I am going to achieve that via another route.

Sounds great! I’m looking forward to seeing it when it’s completed. Yeah, noise might be a factor in my design but I’ll tackle that one when I get there… LED illumination is a good idea!

You’ve put a lot of thought into your X-Bench. Great job!

Thanks! Now I just need to render it in wood.

Now I just need to render it in wood.

Here’s the bench I just finished

Yes, exactly. Even the overhang I used for the top almost caused the same issue and I still ended up moving the end of the drag chain so the cable wouldn’t get in the way of anything.

Also, if the electronics are any further away than actually inside the torsion box (like I did) you’ll probably have to rewire since the stock wires won’t be long enough to reach the electronics enclosure - not the end of the world, just something to know in advance.

That’s a nice, solid looking bench (and your workshop isn’t a bit shabby either for that matter)! Wow!

Regarding the drag chain cable issue, can you tell me the length of the 20x20 extrusion that we see the end of in your close-up photo? Is that the short one that’s 37 3/4" long or the long one (39 3/8")? As for the wires not being long enough, it looks like I may have to extend them. I’m guessing that this is why some folks have the terminating end of the drag chain facing rearward and others (like yourself) have it facing forward (so that the controller can be located at either end)? Thanks for the heads up regarding these issues. Your help is very much appreciated.

The piece of 20x20 in the picture is 1000mm long. The drag chain is facing the way it is because I followed the X-Carve assembly instructions and haven’t drifted much from that (yet).

Is there a sketchup model or plans for this? This bench looks awesome!

Is there a sketchup model or plans for this? This bench looks awesome!

Thanks Joshua! To answer your question, yes there is a model but it’s in the form of .STL files and it’s not quite ready for release just yet as I’m still revising it. Ideally, I’d like to build the bench first before posting the model just as a level of assurance that it has no major flaws but perhaps I could release it prior with the disclaimer that it hasn’t yet been tested (in which case I could likely post the model sometime next week). The truth is, I can’t wait to build this beast! Not only do I think that it’s gonna be awesome, but I also want to get started assembling my X-Carve and that ain’t happening without the bench. I’ve already made many improvements to the model since I posted the initial images here and I’ll try and post updated images once I feel the design is pretty static. Cheers!

Better late than never, the X-Bench plans are now complete. You can download them as a .PDF here: X-Bench.pdf (5.0 MB)

Note that the images initially uploaded for this topic are now mostly out-dated. See the .PDF for the latest, most up-to-date images, features, etc.

Now to go build an X-Carve and an X-Bench.

Great! Let me know how it goes. I’m still re-organizing my workshop in preparation for assembling my X-Carve, lol. My workshop is way too small for all of my junk…

Going thru the instructions I’m curious on your materials list it says 4x8 of 2x4s does that mean I get as many 2x4s that would make a 4x8 sheet?