FYI, the IoT Relay is also sold on Amazon:

The picture of the product on Amazon looks like the V1 version, but the version that ships is actually V2 (2 normally-OFF ports, 1 normally-ON port, and one always-ON port). I did some digging before placing an order… Here’s the answered question of interest:
https://www.amazon.com/ask/questions/TxW4MSW236B381/ref=ask_dp_dpmw_al_hza

I plan to have this hooked up as follows (not yet tested):

Here’s a diagram that explains better: 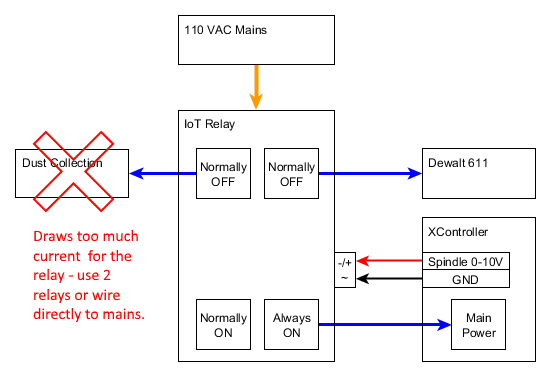 Thanks @PhilJohnson, that’s a good reminder. My “dust collection” system is really just a small shop vac. The Dewalt 611 is spec’d at 7A, and my shop vac at 8.5A (3.5 max HP), which combined at max draw is 15.5A which is over the 12A limit. Then there is the enclosed power supply in the X-controller which is capable of drawing 5.6A (but will likely draw less in most situations as all motors are not on full tilt all the time).

But, it looks like if I want to do this safely, I will need to toss another relay in there. In the mean time, I will update that drawing to remove the dust collection (done) so that other people aren’t inspired by a picture only… and I will pull the vacuum off the relay as well.

My oh my… times seemed to have changed, and quickly. I picked up mine for $29.95 on Prime at the end of November - cheaper than the Adafruit option when shipping was factored in.

But now, the Adafruit option is certainly cheaper.

I’ve read (and IMHO) don’t use relays in parallel. If one fails to switch full load is carried by remaining. Just not a great idea.
Search for a 2hp relay.

I just measured the Dewalt running current with a Kill-A-Watt meter and it only draws less than 2 amps across its speed range.

Free running or under load?

Yep. It’ll work. I just got the exact same thing hooked up on my XC last week. Make sure to go thru the Easel config after you get this manually working and set the spindle for ‘automatic’ when you are done.

You’ll also need maybe change your PP if you use Vcarve to have the commands sent out to turn on/off the spindle. Exactly like @PhilJohnson said - the DC trigger would be split, that’s all.

ok. I can’t see anywhere here, if I just hook up the relay, as per diagram, do i need to change anything in GRBL?.
My spindle won’t turn on. It’s plugged into the normally off. the iot relay is wired correctly. I don’t have anything else plugged into it, and yes my dewalt is set to on.
I have the iot relay off amazon. when i select test spindle on, nothing happens. Is there coding i need to do? as of now, i’ve just wired it in.

I also did the machine machine inspector. M3 S12000, Nothing happened.

Yes. The normally on works, in that it has power. I did check to see if it turns off.

Is there a setting that you change, so that is switches on, and off? Or should it be doing it right from the start?

What? I said have a nice day.

Doubt if you could run one shop vac and the x-controller let alone two.

It’s not running two in his scenario. It’s running one at a time, which is perfectly within the current capacity of the relay. In a Normally On (Closed) and Normally Off (Open) scenario, there’s no way in a non-fault state that they are on at the same time. Especially on a mechanical relay that is physically breaking a connection and making a new one.

As for the Xcontroller, it’s current draw at A/C is max like 4A. So you could run an Xcontroller and a vac/Dewalt on a single IOT relay (the new version with an idiot proof “Always On” outlet) with no issues.

Other than the fact his statement was offensive.

That’s not offensive. He didn’t personally attack you or anything. He just said that you had people try to help and YOU laughed at them. That’s what offensive. Literally the first thing in your reply to Angus was “lol”.

There I removed the LOL, happy now, My mistake.

That entire post has a tone that is offensive. You’re essentially trying to discredit everything that a knowledgeable and credible forum member posted that is actually 100% accurate and true. Your understanding of the contents of this thread is what is wrong and shouldn’t be used to “talk down” to another forum member like he doesn’t know what he’s saying.

Funny how if I say “Lol” its offensive but someone saying I would be sure to get not help in the future isn’t.

“lol” meaning “laugh out loud” meaning “Ha! Lowly peasant! I laugh at your attempt to answer my query! What you say is rubbish!”…yea that’s offensive. One member stating out loud their thoughts about helping someone treating other members like that, no that’s not offensive.

And, that’s not what Curtis is saying. He’s not the end all, be all voice of this forum (sorry Curtis). It’s not a guarantee that you won’t get help here. What he’s saying is, in his opinion, you don’t deserve help from him so he won’t give it. And, in my opinion, he has every right to say that and frankly, is hitting the bullseye. Why would anybody want to spend their time writing a response to anybody when they get essentially talked down to and mocked for a helpful, thoughtful, and accurate response?

I’m beginning to sense the underlying issue here but out of respect, I won’t go there.

As for your original question, since Angus’ scenario is SOOO far fetched for you, here’s another.

As Phil said, the sole intent of the IOT is not for CNCs but essentially a smart switch.

Let’s say I have a home theater room. I can use an IOT relay to power 2 different light settings. One set of lights would be on the Normally “On” outlet. These are the normal lights in the room before playing a movie. I can tie the relay trigger to a DC output of my receiver/preamplifier/whatever so when I turn on the system, it then switches to a different dimmer set of lights that are on during the movie itself. Once I’m done and turn off the system, the normal lights come back on.

That’s why you’d use Normally On and Normally Off outlets.

And, that’s not what Curtis is saying. He’s not the end all, be all voice of this forum (sorry Curtis)

There I removed the LOL, happy now, My mistake.Funny how if I say “Lol” its offensive but someone saying I would be sure to get not help in the future isn’t.

Wasn’t trying to be offensive. Simply saying that I found your reply to be a bit rude. And if that is going to be your response to someone trying to help. Then no worries. “I” won’t be offering any. Again have a wonderful day.

Ok. Let’s chalk it up to misunderstanding each other’s intentions. I’m Curtis. I also like long walks and finding free wood.
Stick around. Learn and contribute. If I misunderstood your comment then I also apologize.

I think this was more of a comment on Phil’s status around here. Than an attempt at a slight aimed at you.

As normal as an Android can be. Isn’t it time to recharge your batteries?