Is Easel a bit too conservative on settings?

I needed a simple bracket cut out of 3/4" plywood - it’s 13" square with a 8 1/4" hole cut out of the center. I was using a 1/4" bit and Easel’s recommended cut settings would take over an hour. I get that Easel would use pretty conservative settings, but isn’t this a bit much? 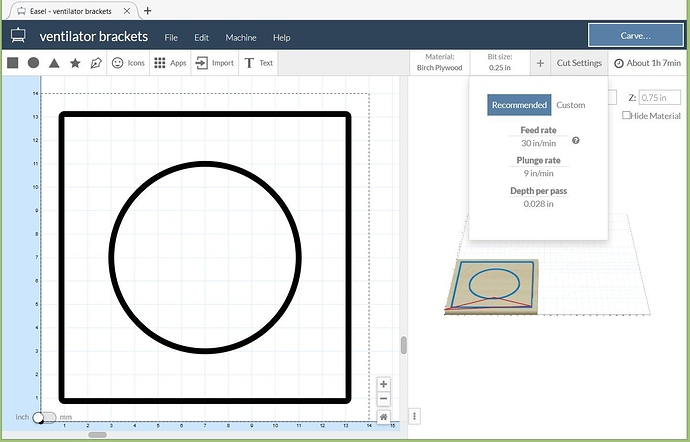 Yes, it is conservative. These recommendations don’t take several of the factors into account. That said, it’s pretty easy to just change the settings to whatever you want.

Myself personally with what ur using…I can for sure set my machine to 50in/min and depth of cut at least 0.03" and I would not have a problem. I can often go higher, but every machine is slightly different. I wouldn’t hesitate to try that though. Oh and makita router speed between 1-2.

Many of Easel’s presets seem like they’re meant for either the original DC spindle that came with the X Carve, or the Carvey spindle. They also don’t have a way to know if you have the larger steppers or the more powerful X-Controller so they just assume the weakest machine they sell. I’ve had great luck on my machine going at 2500mm/min and 1mm DOC.