Is it possible to make money doing 3D?

This may be related to: Please fix the tool path efficiency. 3D carving is taking a long time. If I charge for the time it takes, at $30 per hour, it appears to me that the end product winds up being too expensive to sell. 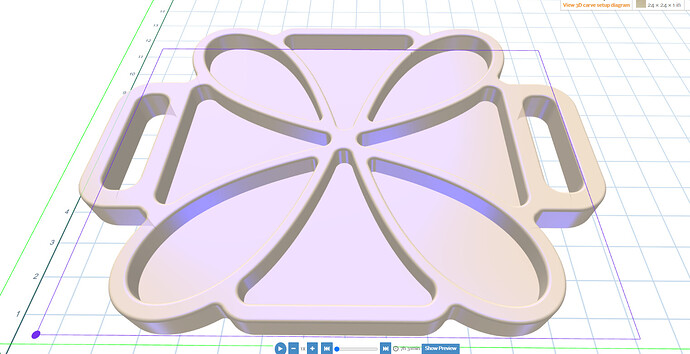 This carving will take a little under 9 hours. The cut settings are: 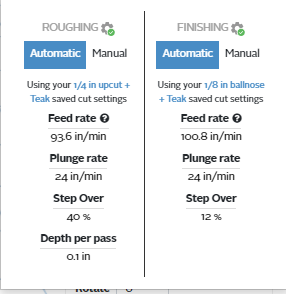 I don’t think these are too conservative.

Like the previous posting, it appears that the tool path is making lots of divots then goes back over the same area, at the same cut level, and the cut path seems to often go to cuts not close by, thus spending an inordinate amount of time not actually cutting.

I know this is your first release of 3D and I’m glad to see you introduce it.

In my experience and opinion, 3D is not profitable and therefore unusable for commercial purposes.

For what it is worth, I love the X-Carve and Easel. It is very good system. I use it daily.

Two D and 2.5 D could use some rework in the efficiency department as well, but is commercially viable in many instances. However, even 2 D & 2.5 D have limitations because of the inefficient tool paths.

A more efficient tool path, in both instances would make the machine and software much more viable as a commercial tool.

Also, if you make money doing 3D with Easel Pro, please let me know what your formula is for pricing so you can make a profit?

I could make this using 2D instead of 3D and drop the carve time. But it seems that all 3D projects have similar results.

Well, I can’t see what size bit you’ve got selected in those screenshots, BUT that Plunge rate (even though it’s an Easel Default) is unachievable with the X-Carve stock settings so I can never understand why Inventables set it as a Default when the Machine itself (per the grbl settings) will self limit to 19.68 IPM. . . And on that note, I suggest tuning this manually, performing a series of tests to determine the best, fastest, plunge rate. IF you’re able to double the Plunge rate in the grbl settings from 19.68 up to 40IPM than your carve will complete in half the time. . . . AND if you can get it to plunge at 60IPM, than it’ll be three times as fast as it is now. . . HOWEVER your design there of the tray would best be carved as a 2.5D design to begin with AND a roundover bit be used to apply the radius to that top edge. . .

Also, if you make money doing 3D with Easel Pro, please let me know what your formula is for pricing so you can make a profit?

Well, the $30/he for machine time, how’d you come up with this value?
Electricity+Machine Depreciation+Maintenance costs=machine hourly rate
Then I’d calculate the setup and the materials separately
The Standard X-Carve draws just barely over 1kWh of electricity and where I live in California it costs about $0.30 per kWh so lets say electricity cost is $1 per hour (including lights, and dust collection)
Depreciation calculated out for 2 years of use at 20hours of use per week comes out to $1 per hour
And for your labor of maintenance on the machine, tightening belts, adjustment of eccentric nuts and the occasional brushes on the router (you should upgrade to a brushless spindle to reduce this cost actually) I’d say 4 hours of maintenance per month and I think that’s a LOT at $40/hour divided by the 85 hours of usage in that month and we’ve got $1.88/hour of use.

Here So Far I’ve got $4/hour for the machine time + fixed cost of $94 = (9hours*$4)+$94 = $130
I haven’t added in the cost of marketing and sales… but we’re well below the $350
AND with some modifications to the grbl settings to allow the Z to plunge faster I’m sure that 9 hours can easily become 5-6 hours. Bringing the cost down a bit more. Speaking of bits, IF you’re buying top of the line bits (or other over priced bits, like the ones inventables sells) that could also be part of the issue as the extra cost is not really worth it for what you get out of more expensive bits.

AND even then it’s about finding the right buyer for 3d Pieces.
Making Niche pieces can sell really well.
I see religious items selling for a lot of $ in the right areas.
Americana like 3D wavy Flags sell for their worth.

I do think that finding the right product, buyers, and ironing out the process can certainly make 3d less profitable than 2.5D especially if you’ve already got a product line of 2.5D items and buyers lined up…

If you’re serious about 3D, you might want to look at other software like Vectric to get better tool paths. You may also want to look at a more professional machine that can power through deeper cuts.

3D can be hard to make profitable. I would say that you might want to do a few 3D pieces to put in your portfolio just to show people that you can do it. 3D carves such as police retirement badges can be more profitable because people are willing to spend for them.

FYI: the tray is a simple 2.5 carving

These are 3d made to order 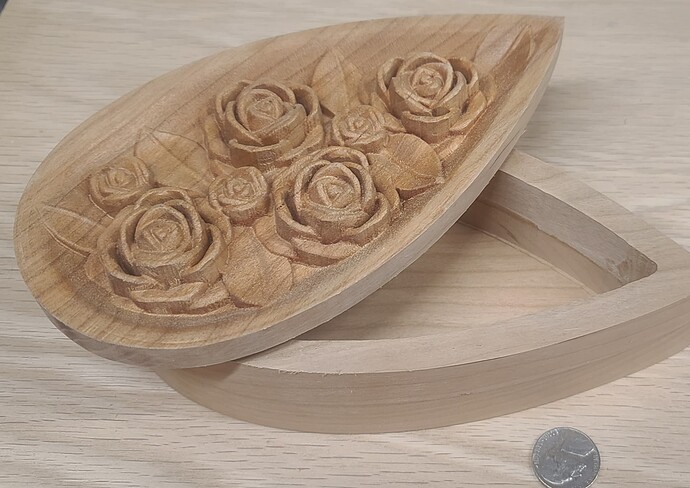 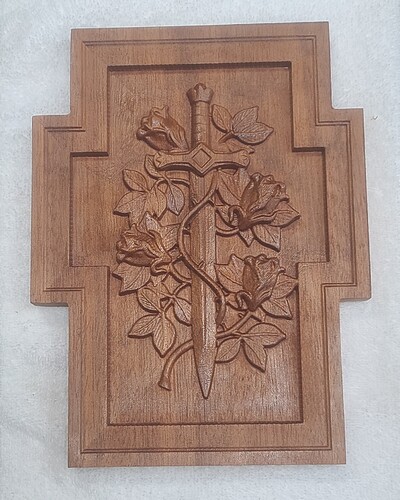 Thanks for all of the suggestions and information. I should have used another 3D piece as an example rather than something that could more easily and more quickly be cutout with 2.5D.

I will try some of the suggestions I never thought about plunge rate having a dramatic effect on time.
What is the difference between plunge rate and depth per pass?

Question about charging for machine time:

I would think using depreciation + run costs + bit cost, etc., would not be a good choice for machine time charges, since I want to make a profit well above the deprecation+ of the machine. Although, I can do a few other things in the vicinity of the machine, it doesn’t seem to be a set and forget operation and at this point (this may be because I’m just not as experienced with 3D yet). Right now, for me, I have to keep a pretty close watch on the machine to be sure I’m carving at optimum settings, during carve and not being too aggressive or to conservative in my settings.

I would still like to see the system not cut a small hole or small area only to come right back over that area, at the same depth, during roughing. I think I understand the logic (algorithm), in that it looks for places the bit will fit and not fit. When it sees a small area where the bit will fit, it will carve out those areas first. Later during the roughing pass, following large areas where the bit will fit, it many times will carve out over the same exact area, at the same depth, which makes the small holes and areas useless activity. If the process were reversed and the software cut out all areas, at a specific level, where the bit could follow a path and then cut out small divots that were left, the cutting path would be much more efficient.

The second area is cutting on one corner of the carve then jumping to the opposite corner to cut out a divot, then jumping back to the original corner to cut a small area, etc. This makes the carving time on rough cuts take longer than they have to, creating more overall carving time and making the machine use cost go up unnecessarily.

And the tool path will cut a fairly long cut then jump across the workpiece to cut another long cut then come back to the original area, sometime later to cut more of the same path.

All that said, I’m happy with the X-Carve, Easel and the effort that is being put into improving the capabilities of the hardware and software and speed of cuts. Nothing happens overnight and the things that I know can be fixed, I’m sure will be fixed, given the time to address them. Ninety percent of my frustration is of my own making. Easel has gone a long way to try to prevent me from making mistakes.

What is the difference between plunge rate and depth per pass?

Plunge rate is the feedrate for your Z axis.
Depth per pass is the maximum depth the Z will plunge to cut at one time.