Is there a way to restart a partially completed design?

I have a design I was working on that stopped at 92% (bit broke). Is there a way to restart the design at say 85% complete or do I have to go back to the very beginning? I wouldn’t care if it was a quick project, but this was over an hour and it seems silly to pretend the first 90% of the job isn’t already done.

The only thing I can think of is to eliminate some of the design and let it do a complete job with less to actually carve, but there has to be a better way.

I haven’t moved anything, so if I could start midway, it would save a boatload of time.

It has been done and was posted here on the forum. I do not know how the process was done but it can be done but I can say you will be editing some gcode so you might want to get a editor like notepad++ or brackets to edit the file. Don’t quote me on it but I think you leave the header info and remove a chunk of code If you know what line of code you stopped on it will save you a bit of time. I don’t remember who did it but I think it is one that frequents here often so you may be in luck but I am sure somebody knows. Sorry that’s all I got.

What I learned to do is break up the program into several smaller ones and then combine them into one file to cut with.
This bar sign has 10 programs for just the V carving.
All are with a 90° V bit so they can all be combined into one cut file.
If I have any trouble with a particular section, I can just go back and pull it out of the master program and run it by itself.
I hope that I explained that right. 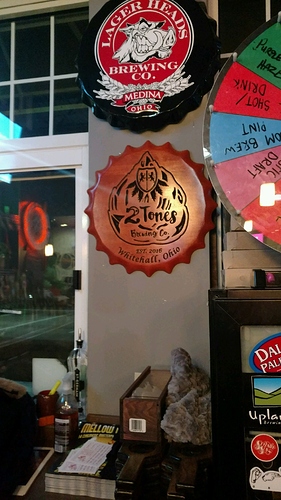 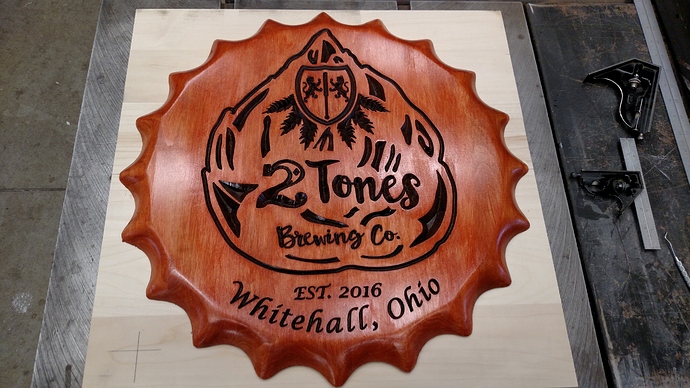 First off, Jan that is pretty darn cool.

Thank you all for your advice. I’m working in easel, so I’m probably going to overlay a zero-depth cut over the top of most of my design (thank you Phil), instead of pulling out lines from the Gcode (which is probably over my head - although I understand why it would also work).

I’ll let you know how well it works.

I will be trying this with those 16-23 hour carves.

Peter,
Thank you for the complement.

Robert,
That’s exactly why I started doing it.
Sometimes I have a depth problem with my lettering.
Then I can just go back, set it for another .010 deeper and run it again.
I can do this as many times as I want until I get what I’m looking for.

Jan, can you explain how to do that? braking up the file

In this case all the V carving is done with the same 90° V bit.
The shield is a program by itself.
The two griffin in the center of the shield is a program by it self.
The large number 2 is a program by itself.
Tones is a program.
You get the idea.
As long as they are all done with the same cutter, they can all be checked and saved as one cut file.
If I have a problem with one of the sections, I can just go back, isolate the single program call it a separate name and run it alone.
I mostly have a problem with the “Est. 2016” (not deep enough)
So I can just re-run profile number 8 and set it to go a little deeper.
(I usually go ~.005 - .01 at a time)

Sorry for writing a book.
I hope I explained it to you.

I must add that I use Vectric desktop.

In a hypothetical future world with Rainbows, Unicorns, and no Easel or UGS,
AND
Assuming you re-home the machine before the carve,
The software (that is better than either UGS or Easel) would take a snapshot of the X,Y,Z along with the line# of the gcode file.
Resuming at hour X would be childs-play.
Just saying… It’s better in my head

Updated post to better reflect my view was hypothetical, and not based on what Easel or UGS does today.

If everything stays powered on, there’s no need to re home.

I don’t leave my XController turned on between sessions.

Can you literally delete every thing up to that line. Or do you have to leave anything at the beginning. Was wondering because last night was playing around with a halftone image and UGCS just froze. I know the line # and my home position so I could start over but definitely could save time.

This topic presents a question which I am sure has been address multiple times before…but, if you don’t mind I would like to ask here now: Easel does the job but is there any other software which is user friendly (low learning curve) but yet more flexible & powerful?