I imported an svg of a wheat wreath (image included). Carving simulation is just fine initially, but if I scale the image at all, it becomes a complete mess in easel. I’m somewhat literate but this one stumps me. I can share the project at Easel - Wreath carving project issue

When it is scaled - the path goes from constant pattern to individual dots - which is the main issue I see. I did not create the image

I got it down to less than 9 inches square and it still looks good to me.
How small are you trying to go?

I see some weird overlaps on the left most and right most branch stems. and this might be part of the issue… You might have better results modifying the SVG in incscape or procreate or a similar graphic design software prior to importing to easel. IF the SVG is actually a layered SVG then it would be easy enough to fix that issue in inkscape…

As for the scaling, I took it down to 2" wide and it looked fine (other than the weird toolpaths caused by those overlaps I mentioned b4)

Mark I don’t see an issue either, I wander when he says “dots” if it is the individual “nodes” he is looking at?

Thanks for the response, I really appreciate. I use Inkscape, but am a novice user. I’m trying to get the image (in easel) to measure 20.75". it is 20.062" now. When I import the image and simulate the carve, I get image 1. When I scale (proportionally) to 20.75, the simulation generates image 2. 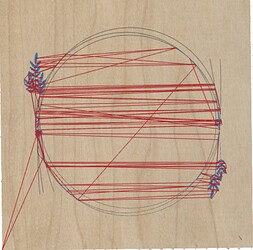 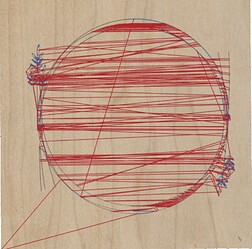 Another user (SteveMaloney) referenced the “nodes”, vs. my word of “dots”. My use of “dot” referred to the action of the router when I test carved one on wood… It simply produced a seemingly unending row of dots vs. a continuous line. “Node” may be the right word, and it may be an issue with how the file was created, I don’t know. I’d like to figure out how to address this and make it more like a continuous flow of carving vs. the “dot” action. I know this is not an Inkscape forum, but do you have any advice on what can be done in Inkscape to address this?

Thank you for your response… I really appreciate it. The issue for me occurs when I try to scale larger. I’m trying to get to 20.75" width inside of easel and as soon as it goes above it’s original size, I get the segmenting (probably the wrong word), among other issues. I don’t understand why it creates the issue when scaling up and not down.

I think i understand now.
Easel isn’t the best at grenerating the most effecuent toolpaths and a a result there are more unnecessary transition moves and excessive lifts and plugges (“dots”) than many other softwares will create.

There isn’t a lot that can be done to reduce them, you could use the simplify function in inkscape to reduce the node count and that’ll help a little but not a lot, unfortunately it’s really just the easel toolpath algorithm inefficiencies coming out.

I used the offsetter app and did a .001 on it. As you can see that tiny bit of fattening makes a significant difference in how easel will generate the tool paths. The cave is a bit wider allowing the bit to go a bit deeper. Believe it or not the tool paths are significantly better today then a year ago. 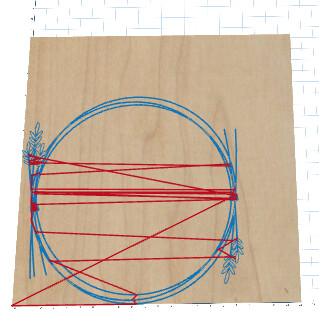 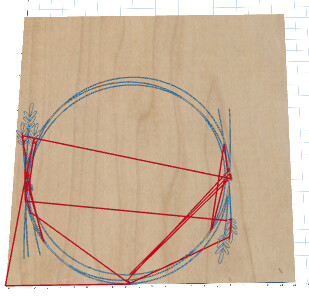 Thank you for taking the time to look at this. I think my problem is rooted in the source image… I don’t think that it was created very efficiently… and may not have originated as a vector image. combine that with your comment on inefficient tool path algorithms and I think that gets me where I am. Another user referenced the offsetter app… which I tried, and it does clean it up quite a bit… but I may just go back to the literal drawing board and find a better source to start with. Thanks again.

Thank you!. I think my problem is rooted in the source image… I don’t think that it was created very efficiently… and may not have originated as a vector image. I tried the off setter app, and it does clean it up quite a bit. I need to decide if I need to go back to the literal drawing board and find a better source to start with… vs can I do a little clean up on the image that off setter produces. Thank you again for your time on this… I do appreciate it… always learning!!

Sometimes SVGs do not scale properly as not all of the nodes are connected thus the image gets distorted and weird things occurs. The other thing you might try is grouping the entire svg so that it scales by proper proportions.