yeah I heard good things about it. I’m not really a linux fan mostly because I haven’t got a lot of experience with it. I did recently work with raspbian and have once installed a triple boot system with win7, win10 and ubuntu… So I’m not a total noob i guess…

Might look into it, but I leave on a holiday the day after tomorrow so it’ll have to wait until after that.

oh and you’re right the demo is unlimited in time. I confused it with a demo of g-wizard I also wanted to try.

btw what post do you need to use with linuxcnc?

If you’re like me, you’ll have a PC dedicated as a CNC controller and once it’s set up, you rarely need to touch it. I don’t apply updates unless they’re to Linuxcnc itself. No other applications run on that PC.
I have a Samba/Windows share set up on my main server and all gcode is created there for the CNC controller to access. I mostly use CamBam and Fusion 360 to generate gcode, some python programs as well. Just starting to use kiri:moto
I haven’t used Easel at all so don’t know what sort of post processor might be needed.

Gecko will send you the config files for either - it is a breeze. Mach3 is all I know so I can’t compare - but it was never too challenging for me because I had the book “Build Your Own CNC.” I just followed the directions and it worked great. This was long before x-carve on my “homemade, exceptionally ugly but still quite functional if not a bit shaky MDF house of cards DIY CNC machine.” I could never develop a good logo for that brand name so I did not bring it to market.

well i finally got all my orders in.

OK I didn’t mean that 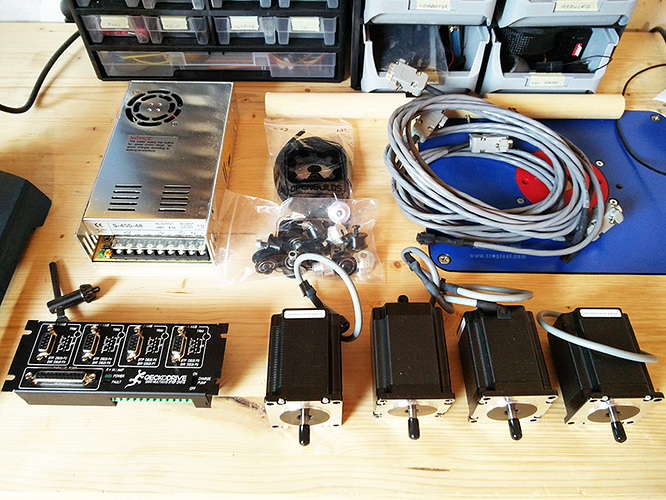 How can you enjoy your holiday knowing all this is waiting for you at home?
At least you can think about putting it all together

Have a good break.

Did a nice long test of my setup and the rotary axis…after some tweaking everything is running great.

First, I took a piece of oak and made it round. 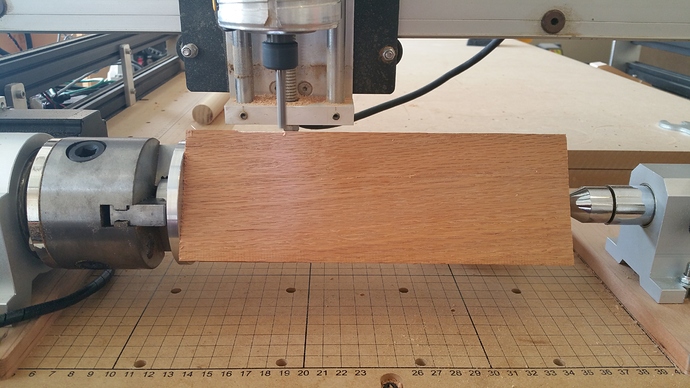 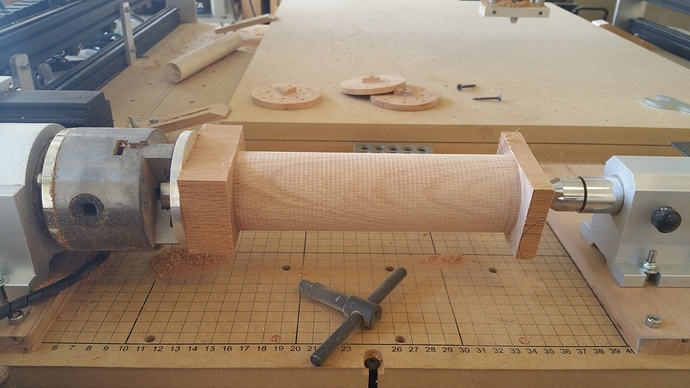 Then did a roughing pass… 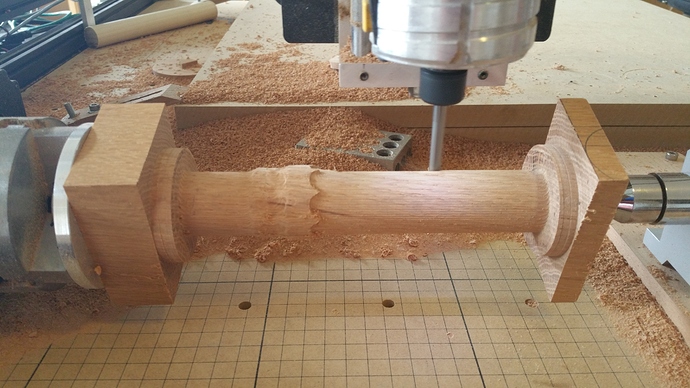 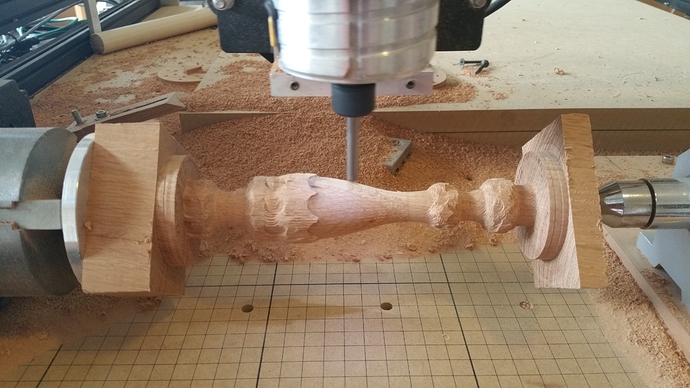 Then the finishing pass… 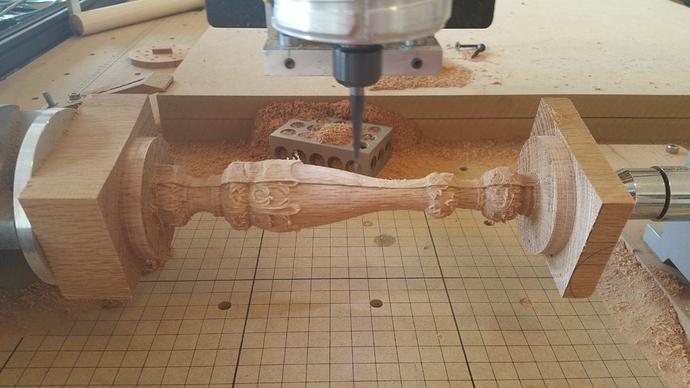 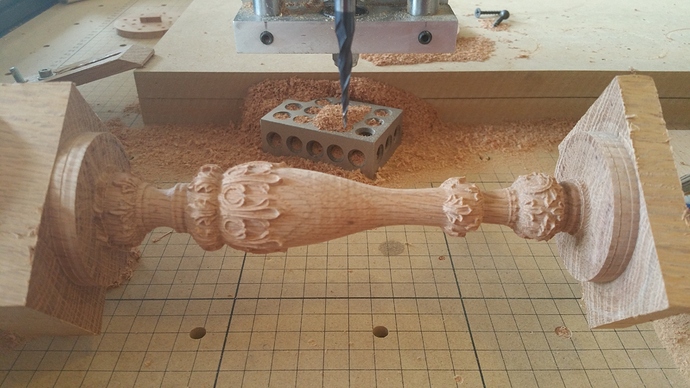 That is amazingly good.

ok, I am officially impressed…

ok, I am officially impressed…

I’ve been watching this thread for a while now and I can easily say seeing your success and the work you’ve produced so far has been one of the biggest influences in my decision to bite the bullet and buy an X-Carve.

I’ve received my boxes (yay!) and i’m currently just waiting on an X-Controller but I’m busy setting up my work area and planning some early upgrades to do right off during assembly so I can hit the ground running with a solid machine.

With that being said the one upgrade i’m having trouble sizing up is the vertical supports like you have on the mid-span of your Y-Axis here (I think you may be calling it your X-Axis). Are those aluminum plates 1/4" or 1/8" thick? Did you have to cut the wasteboard or make any other adjustments to secure them properly between the makerslide and the extrusions on the base?

Thank you in advance for your response!

I used 1/4" aluminum to make the Y-Axis supports. The bottom of the supports were milled to 1/8" thick. So the lip, where the bracket goes from 1/8" to 1/4" rests on the wasteboard and the support is simply bolted to post-assembly nuts in the Y-Axis and the aluminum extrusion under the wasteboard. No changes were needed to be done to the wasteboard.

Perfect, thank you for your response!

Is there much flex I surface plane live edge slabs and the original one has a lot of movement in the v- wheel bearings. I was going to order one as I need rigidity when I am cutting on the x axis. What was the process for calibrating it, I would assume you still keep it as an acme setting? Thanks Ericss

The new axis runs much smoother with no side to side flex of any kind. If you plunge too quickly, just like the original, you will flex the gantry. Since it uses the same type of acme rod to drive, the calibration is the same. I did tweak my steps per mm a bit, but it may have been off before I replaced the axis.

Eric… one other question. Will the 7" travel work on a stock x carve?

I had to machine mounting holes on the back plate of the one with 6" travel to attach it to the standard mounting points on the machine. I also had to machine a new plate (out of 1/4" aluminum) to attach the Dewalt mount to the new axis.

Could you let me know where you got your stuff to do the waste area with the T-Track setup.I am interested in doing the same with my system.
Great job btw.

Thank you. I got the t-tracks from rockler.com, i believe they are on sale now.

I decided to remake my pendant since I am using Mach3 to control my machine now. Just getting started, but I am using an Arduino Mega and adding a nice 3.2" Graphic LCD to display some information from Mach3.

I am using a combination of Mach3’s modbus protocol and brains to get info to the GLCD and interface the buttons. It all works very well, now it is just a matter of figuring out how I want the enclosure to be. Here is a shot of the GLCD displaying info from Mach3. I am currently displaying X, Y, Z and A axis positions, Jog increment, Feedrate Override percentage, Feedrate and Reset status. I have more room on the screen, but still figuring out what else I want on the screen, if anything. 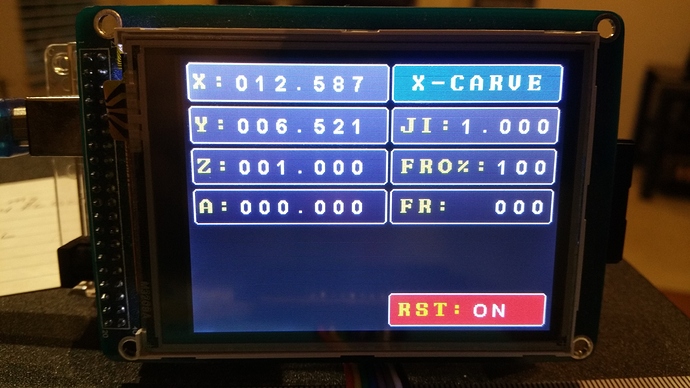 THIS, is a great thing. Post a link to that protocal - I assume it is some kind of serial connection? I have a great script to reliably read rpms in to add to your “feed.”