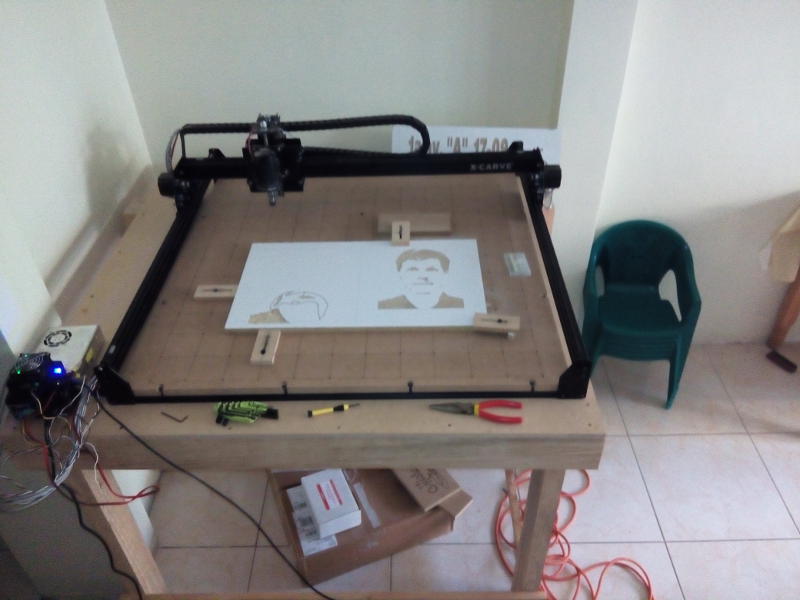 I managed this in two attempts. In the first one (on the left) I realized the y wasn’t moving when it did a big step. I watched Manhattan Wood Project’s videos (very helpful), adjusted the current to the motor, and also reduced the depth to one pass to speed things up, then tried again.

I just used GIMP to change the photo to two colors, then used Inkscape to make it an svg, imported into Easel and Bob’s your uncle. It took 20 minutes with the 1/16th bit that came in the sample bits set, and although Easel said the bit was too big I’m happy with the result.

For next time I will take more time in GIMP to tidy up the details and simplify the design, and will probably cut a bit deeper.

My belts are nothing like as tensioned as the video recommends, but as the machine won’t be doing anything too strenuous for now, I’d rather leave good enough alone. If my 24v spindle looks like giving up I will put on the DWP611 I managed to find here, and readjust everything properly then.

what kind of wood is that? is it naturally contrast?

at first glance it looks like a laser etch/wood burning.

It’s just a bit of white melamine.
(And thank you)