Its the weekend and I can't connect

So I finally finished assembling my machine last night around midnight. I went through the setup and everything seemed to be working great. Machine was responding to commands on my computer, did the Z probe, set the home etc. Went to carve the test image and the machine started going backwards. Left on X axis was now right. I thought I corrected that issue on the initial setup. Anyways, I hurried up and hit the stop button. Now I can’t get the machine to reconnect to the computer. I checked the stop button to make sure it wasn’t engaged and attempted to use the various troubleshooting topics that are already on the discussion board. No luck… Any help from you all would be great! I’m getting desperate and I really want to get this bad boy up and running. Thank you in advance!

Disconnect the USB cable for about 30 seconds and then plug it back in. Try again.

If that doesn’t work, power off the computer, then back on. Try again.

I tried the reboot of the computer, taking the USB cord out and plugging it back it. I even uninstalled the Adruino drivers and reinstalled them. I just tried plugging it into my Mac and it wont even recognized it. Is it possible that something went wrong when I hit the emergency stop button. It’s not like I slammed it full force, I just pushed it till it clicked and stopped.

To answer your questions Robert, I am running Windows10 and the Mac that I attempted is running MacOS High Sierra.

I am wondering if something is damaged on my Adruino. The LED was partially bent when I unboxed it. It doesn’t light up but I figured that was due to the small amount of damage and wouldn’t be a big deal. I just don’t understand how last night everything seemed to be going fine and now I can’t get anything!!!

I twisted it and it popped. I also too the controller apart and examined the underside of the stop.

When you power up the x controller do you hear the motors start?

Not sure if Macs work the same, but does it make noise when the sun is connected?

Can you see the x controller listed under your connected devices?

So I also just noticed the LED on the back of the controller is not lighting up either. The controller is on and I can hear the motor. Not sure if it’s the same issue as the Adruino LED being damaged or if it is something deeper then that. The Italian temper is starting to set in…

Yep I hear the motor. but the x-controller is not listed in my connected devices.

I think what @KyleBechtold means is, do the stepper motors on the X-Carve power up? They should apply some torque and hold their position when they power on. Don’t try to push them around by hand to test this, since that can kill your stepper drivers. But watch the X- and Y-axes closely and see if they are receiving power.

This. Not the fans on the xcarve. The stepper motors. You should hear them engage

I don’t think I can hear them engaging. Should I completely rip apart my x-controller again? I don’t know much about computer boards or what I could be looking for, but the fact the light on the power is not indicating power is somewhat alarming. Even if I can hear the fan turning on. Could the signal be going to only the lower part of the controller and not being passed along to the Adriuno? I’m just rambling now, but I’m at a loss for words.

Try and bypass the front of the machine connect a usb internally. Some have had issues there.

Both lights not working is almost too much to be a coincidence.

You may have to do some probing with a dmm to ensure power. I haven’t explored these that far. Hopefully someone else can chime in

Check to make sure that the internal cables on the X-controller are fully seated in their sockets. The retaining clips will close prior to fully seating the connectors.

This has got to be it. You pushed the stop button and the controller seems to be behaving as if the button is still hit. Maybe there’s some sort of issue with the button itself.

Bypass it entirely and see if the machine powers up. Worst case, you’ll have removed a variable from the equation.

I just tested it and the fans still run, but no lights when stop is engaged. Either your stop isn’t being reset properly(You aren’t turning it all the way) or it is faulty and staying engaged.

So I went with completely removing the stop button. Pulled the entire piece out of the controller. still nothing…

Can you start taking pictures of your connections? With no power lights and no stepper motor engagement it sounds like it is with the controller/connections and the computer doesn’t play a role

yes… One of the first things I looked at. 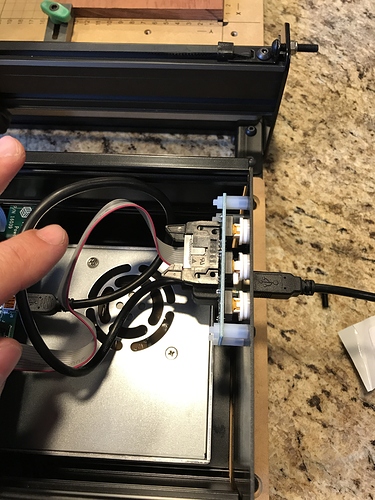 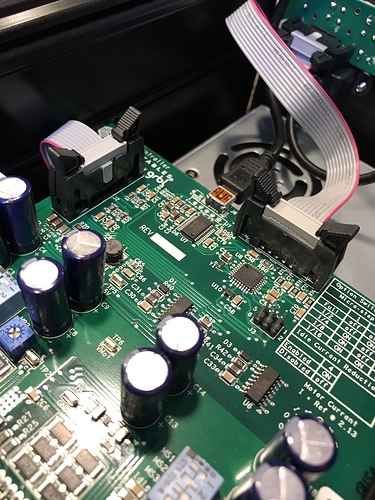 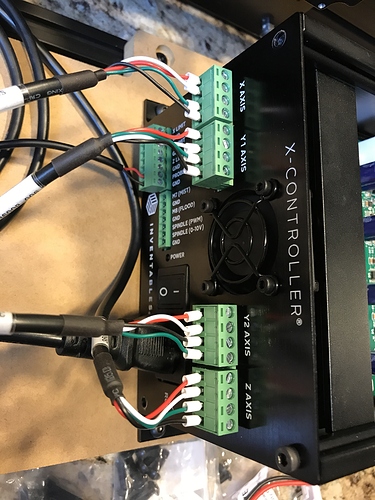 Your ribbon connectors are not fully seated in their sockets.

I tried pushing them in further. That’s all they go. The clamps clipped on them. I disconnected al of them and reconnected them.