Recently purchased j tech laser. This is only the second project I have done with it. Still trying to figure it out. And to be honest this has been the most success I have had with the X carve, but that’s because I’m a weekend diyer and I’m very busy. 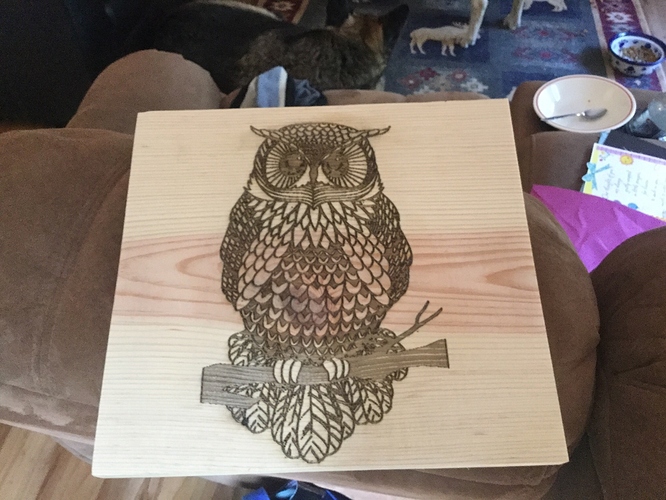 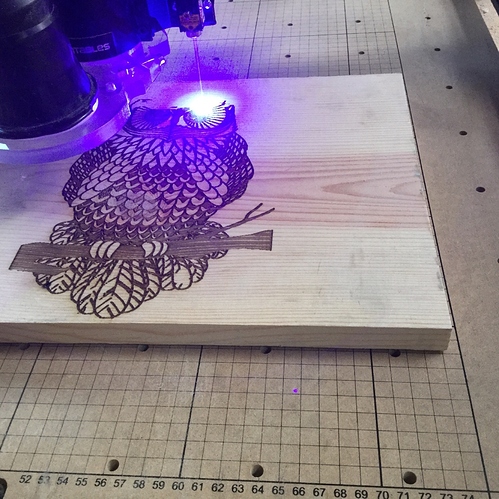 How long did it take?

I believe it was about 2 hrs

What laser kit did you get. and how long was the setup. I was planning on ordering a kit tonight.
Looks great.

2.8 w, set up wasn’t bad- mostly running wires. I did the box with a switch so I can switch back and fourth between spindle and laser.

What software did you use? Looks great

I used g code sender. I was creating file both in vcarve and pic engrave 5 and it was saving all in one spot. So I’m not sure which was used, 1 would not load so I selected a different file. Was trying to figure which one I used. Either way it came out pretty good.

Intresting T2Laser … i must check it in work but for now i use Inkscape plugin Raster 2 g-code generator with some modyfication in plugin to get more DPI. Link here https://hackaday.io/project/4828-raster-2-laser-gcode-generator

A quick glance at T2Laser and it seems a bit steep of a price for what you get. You can check out the LaserWeb project at https://github.com/openhardwarecoza/LaserWeb. It is a nice project but you do have to do some system tweaking. I was using an older Dell and had to swap graphics cards just to have the browser work correctly with the software! The graphics card did not support WebGL 2 in Chrome for some strange reason.

[rant] Personally I have tried all the free/open source laser software available and have even purchased a few of the other available software packages out there but I have always gone back to the PicEngrave products. PicSender is my goto for both laser and CNC. It just works and is very powerful once you get to know the software. Most of all, you cannot beat the support. Between PicEngrave and Jtech, they have everyone beat hands down. Yes you can go cheaper but you will not get the same level of service for your products. I believe you get what you pay for. [/rant]

I am using the Inkscape plugin too but it’s limited, picengrave looked good but I couldn’t get it to work correctly and didn’t think much of the interface.

So far t2 seems to do everything I want so would be worth $20 to regsiter. It’s basically picengrave and their sender combined, which would be $60 so I don’t think it’s too bad. It also has a neat gcode viewer that shows laser power, and most of these features are free so I will keep using the trial for now.

Before I lay out any cash, does anyone know of other options to check out? (free would be nice).

That looks great… I am also just starting out and finished my assembly 2 weeks ago and I am completely new to this whole hobby.

I have the 3.8w laser kit and my first test actually turned out more like a wood burning project. I have been preparing a simple test image using multiple software trials and I wondering how all you handle the values for the laser power? The only one that I found that allows me to change the value from 0 to 10000 is the jTech Inkscape plugin but it only does the outlines.

Are you using the xcontroller?

I’m using xcontroller. This was my only success so far. Had played around with the files prior to getting laser set up and not sure which settings I used. I paused it once and machine errors out . Then next run the X belt snapped due to a set screw coming out I think. A couple of files just zipped z axis to sudden stop at the top. So now I’m wondering if this was beginners luck.

You have to go into UGS, Be sure you unlock the GRBL with $X, Go to command line type $$ to check the GRBL settings $30 line should be $30=1 (its the default) now in command line of UGS type $30=12000 this will reprogram GRBL with new setting and now PWM should be working.

Man that looks great. I always wanted to do that but worry about fumes. I have my CNC machine in a basement workshop. I imagine there is a lot of smoke.

Yeah there is quite a bit of fumes

Both PicLaser & PicEngrave Pro 5 will allow you to set the minimum/maximum to unlimited S values for PWM laser power control to raster engrave images.

You can download the Demos on our web site for your testing: http://www.picengrave.com/Pic%20Programs.htm