I’m putting this in Uncategorized because it’s not an X-Carve issue, it’s something with my mostly printed CNC build. However, I figure many here would have some ideas on troubleshooting it, so I wanted to post it to knowledgeable CNC people on this forum as well.

When lasing diagonals and circles, I’m seeing strange step patterns. It’s almost like zooming a JPG in photoshop up to like 1000% and seeing how each pixel lines up since pixels can’t make perfect curves.

Remember this is a laser, so I don’t have deflection or chattering from bits digging into wood.

Maybe it’s a laser focus issue? Not a tight enough beam, and thus getting bigger “pixels” on the cuts instead of a smooth curve? Not sure.

But if it’s a machine issue, I figure you guys are a good bunch to start the troubleshooting.

I checked and the pulleys on the stepper motors are tight.
I don’t notice any slipping on the belts.

Straight lines are good. Machine seems pretty square…a 25mm square looks to be almost perfect right angles and with a straight ruler seems to be pretty darn close to exactly 25mm in both directions.

From a basic mechanical and electrical viewpoint…any troubleshooting steps you guys can think of that could cause this?

May seem like a simple question: are the images your lasering high high resolution? Surely its not a low-res pic that the laser is trying to engrave?

No, this is purely testing the machine lasing shapes. Triangles, circles, hexagons.

I’m making sure everything looks square and “tuned” before I try to run something cool like pictures.

Designs are made in Inkscape (just a single shape) and using a gCode generator from JTechPhotonics.

I sent the gcode file over to the guy who sold me the MPCNC parts, and didn’t see any stepped edge issues in a gcode preview, so we don’t think it’s a gcode issue.

I’ve also exported one of the shapes gcode from Easel and added the M106 (on) and M107 (off) laser commands, and it had a similar issue though not quite as pronounced.

How big are the steps? The X-Carve has a resolution of about 0.075–0.13mm (per the product page) which is based on the resolution of the stepper motors and the radius of the pulleys. If it’s in that range it might be unavoidable (short of modifying your machine somehow) but if the steps are bigger than that then something strange might be going on.

Which gCode interpreter are you using (grbl, other)?

Which gCode interpreter are you using (grbl, other)?

Rod - I’m not using an X-Carve, but will now have to see what size the steps are to see if they’re within enough tolerance…but I’m using NEMA17s with 16 tooth gt2 style pulleys, so I should be able to get pretty darn close to the same resolution Xcarve gets.

Ok, I thought this was in Uncategorized section, not sure how it got into X-Carve.

When moving in X direction (either way) there’s a noticeable “ticking” sound from my machine, and I am just too deaf to figure out where it’s coming from.

You can feel it jitter ever so slightly on both X motor pulleys as they move as well. I"m guessing either they’re not moving QUITE what they should be, or that shaking is also shaking the gantry just a little bit and moving the laser.

Y moves are perfectly quiet and no jittering at all.

My table is also (right now( just a kitchen table with a sheet of 1/2" plywood on it, so it doesn’t quite handle the machine jiggles…but since this is only 1 direction currently, I’m leaning towards it being a motor/wiring issue.

Pot setting too low maybe? Need a good meter to be able to test this though…

Could be some faulty bearings/guides? What was your reasoning for having 2 motors on the X opposed to the more common 2 motors on the Y? I’m just having a tough time visualizing your machine.

This is my machine. 2 motors on each axis. Not entirely sure why, but I wanted something that looked fun and kinda inexpensive to build. Though if it doesn’t work and I end up scrapping $500 in parts, I could have just bought another X-Carve.

Well that’s pretty cool! I hope you can get it going!

Can you post a picture of a problem cut? Have you tried different software? What controller are out using (sorry if you posted already). Nothing is sticking? Could one of you printed parts have broken where a bearing is held? 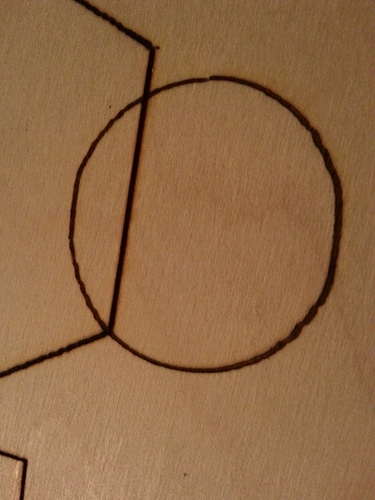 Here’s a test shot. You can see one straight edge, and it’s very sweet. But the diagonals that come off it, and the circle, are a mess.

I’ve created files in Inkscape and in Easel. I have to edit the Easel gcode to add the M106/M107 on/off control for the laser.

Nothing is cracked that I can tell. I’ve been pretty gentle on most of the parts particularly the bearings. I wonder if I have a bad bearing in the batch…but this whole gantry thing is such a pain to take apart that if it is something like that, I may just re-purpose the motors and electronics and build something out of makerslide or v-rail.

Tomorrow I’m going to pull the gt2 belts off and see if I hear/feel any ticks without any load on it.

Edit: That straight line is something like 75mm, in case there’s a rough question on size of the objects.