So, I tried my first 3D carve today - a sign I’ve created for a friend using Fusion 360 (also another first for me!).

I imported the STL into Easel and decided to do a 1/3rd scale cut in MDF as a test.

However on any curved surface I’m ending up with less than a smooth curve - pic attached. 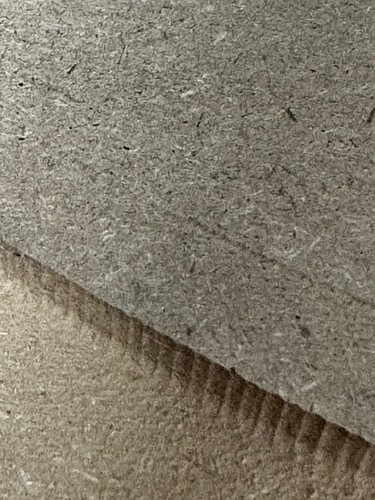 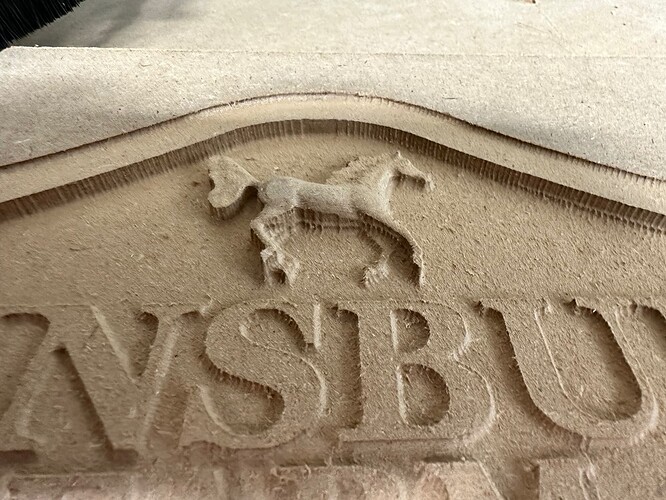 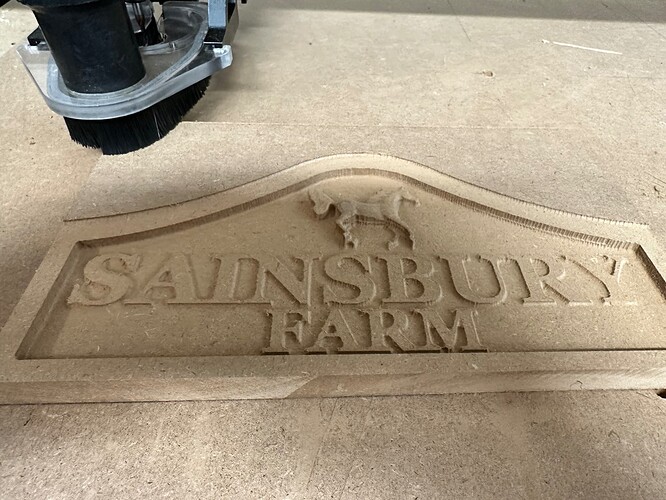 I’m using the Easel standard 12% stopover - is this the issue, or am I missing something? Or do I have a hardware issue?

Any help appreciated before I embark on the full scale (29"x 16") carving.

Can you show an image that is zoomed out some so that we can determine which part of the project this is on?

If it was me i would set the stepover down to around 6 percent. It will take longer for the finish but should give you a better finished product. Just my opinion.

Thanks Wayne - I hear you but was concerned about the overall time, especially on the larger carve later - but obviously results count foremost!. With a smaller step over, can I increase feed rate?

I would but i know my machine not yours. It will take less off so so you can try speeding it up if you don’t get along you can always slow it down.

Was that a conventional cut or something else?

This Sign would be better carved as the horse ONLY being carved 3d and possible adhered to the remainder of the sign carved as a 2.5D design…

How To Choose a Stepover for 3D Profiling

How to Choose a Stepover for 3D Profiling CNC Milling Feeds and Speeds Cookbook This is a guest post by Robert Grzesek, founder of Grzsoftware and creator

Thanks Seth - Creating in 2.5D with a 3D inset is an option - however Ideally (for grain continuity etc) I’m hoping to avoid this. I’d love for easel to be able combine 2.5D and 3D in a carve (In your experience is there a SW alternative that would?). That way I wouldn’t have to create the whole design in 3D in Fusion 360.

Watching the machine in action, 3D doesn’t include the edge cleanup carves in the same way that 2.5D does. Thanks for the article too.

Hi Wayne - It was designed in Fusion 360 and imported as an STL into Easel, so the whole project was carved as a 3D project. The Roughing bit didn’t carve to the edge of the design, but left a margin that was then trimmed out with the 1/8" ballnose.

Looks like it was a raster cut instead of a contour cut. The contour cut will clean the edges up better then the raster cut.

In your experience is there a SW alternative that would?

Well Fusion360 has the Machining module that can do this. But its very complicated with a high learning curve, but once you learn it itll come out perfectly.

Other options are vcarve pro and carveco maker.
If you want to give carveco a spin, heres the link to 90 days free use: Carveco CAD/CAM Software - 90 Days Free (Maker) – His N Hers Handcrafted

Wayne, is this an easel 3D setting? If so I can’t find it! thanks

I have not used easel yet for the 3d carving so it may not be an option and maybe you need to have easel pro.

I can’t see it on Easel Pro, which Is what I’m using for 3D. thanks anyway

Those are not settings available within the Easel 3d module.

Thanks Seth i use them with Vetrics and the way it looks it is a raster cut that may be a lot of the problem.

The photos you showed, on the sides it has a lot of movement and steps.

-Check the preview on Easel. If that shows you what you got, so the toolpath is wrong. Reduce the stepover.
If that does not change the design, check the gantry and the wheels are tight. It happens to me after several hours of use it started creating that problem because of an loose screw.

-other option: Try to generate a G-code of your model from Fusion, and use Universal G-code sender. That doesn’t fail.

-If you still have the problem, the STL file could be the issue. Try to increas the size of the mesh of thay model to smooth out the edges.
Some design software has problem generating cirles as a continuous line. For example on sketchup, a circle is generated by several faces, and when it is carved out on the CNC you can see the small faces not a continuous line.

If you still have the same issue, create a 2D toolpath profile with a straight upcut router bit, so you will have a smooth edges.

I hope this can help you solve your problem.

Thanks Ulysses, what I have ascertained is that Easel does not allow for 2D profile cuts when working with an STL - all work along the x axis commenced with a plunge cut using the roundover bit - hence the scallops - reducing the stepover helps, but at the cost of time.

I’ve now moved to Fusion 360 and g-code so I can create appropriate paths for the design to ensure smooth profile edges.