I’m trying some simple designs for a Carvey class but since day one we’ve noticed some terribly jerky movements in the y-direction. Rounded out paths look pretty shaky too. Is this just normal for the Carvey or should I be looking at some other setting. It’s most prominent when running doing MDF.

And while I was confirming settings for this post, I ran a quick job without a bit and the bed still moves jerkily. (Like it’s rubbing/catching on something). 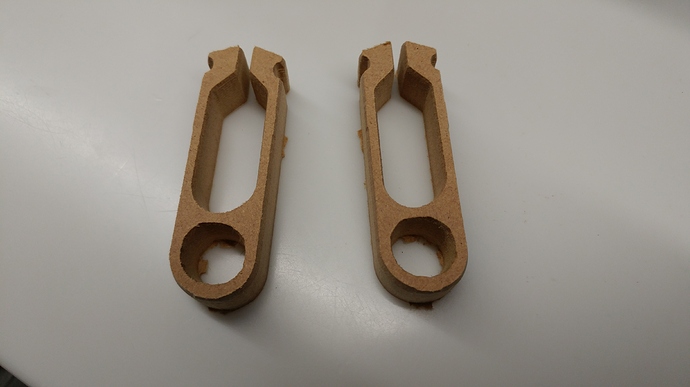 I had a loose connection at the X controller on one of my Y motors. It “sorta” acted normal but was jerky much like you are describing. That was an easy fix. Good luck!

Thanks! I’ll take a look at it if this place ever gives me the time to do so. I planned to take the bottom plate off too and check for anything that might be causing some binding.

Robert, You can also: Power down the machine, unplug the stepper motors, and move it by hand to feel any binding.

If you don’t unplug the stepper motors, they will act as generators and send current back to the stepper drivers and possibly damage them.

I’m sure you will get this fixed if it is indeed a hardware problem!

I pulled the bottom plates out, cleaned any debris from the bottom and rods. When I move it by hand, there’s a couple spots that catch slightly but it doesn’t seem like a huge deal. I ran a test job with long straight movements and there’s definitely a spot where the bed “catches” or jerks ever so slightly. I tried video recording it but it doesn’t really pick it up. The good news is, it happens right about in the middle of it’s movement so perhaps I can design around it for the time being.

Well, that’s odd, it would seem that there would be a problem with the rail??