After doing some simple things like cutting out round ornaments and doing some basic signs, I decided to do something more complicated for a secret santa exchange.

First I needed to cut the jig. I did this design in AutoCAD, exported as DXF, imported the DXF to Easel, converted the circles to drill points, and then cut it out of 1/2" plywood. I only made shallow indentations for the holes and finished on the drill press. There are 3 “extra” holes because I forgot to switch to a second part in Easel. I stopped the cut and then selected the right one.
1/4" bolts are used as axis of rotation and index pins. I hot glued the part to be carved to the hexagons. 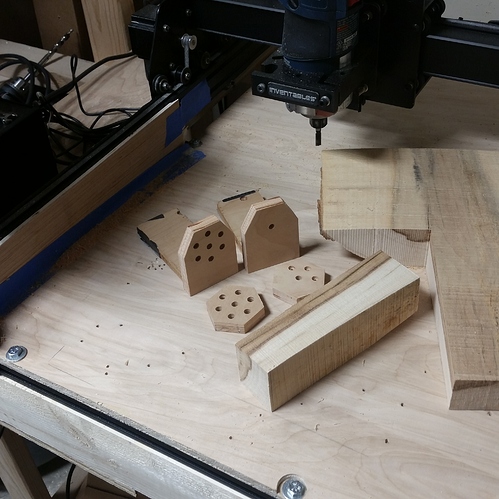 Next I ran a series of processes repetitively. 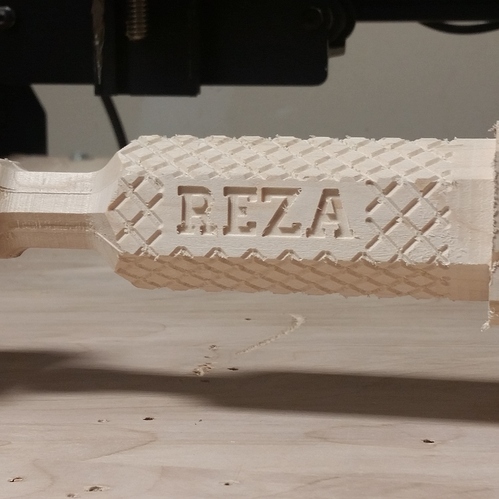 I cut the small end first and did this by removing material vertically from the sides. This allowed me to have a curve since Easel only curves in the XY plane. I needed a 1" long 1/4" bit to do this. I used the top of the jig as the Z=0 and the XY 0 was along the axis of rotation at the front of the handle. I ran this 6 times rotating through the various sides. When I had a chunk of material that could be sawed off that is what I did. Cutting like this saved CNC time, though I ended up with quite a bit of “just cutting air” time as material had already been removed in places in the previous cut.

Next I flattened each of the 6 sides of the main part of the handle.
I used the same XYZ origin. This was a “traditional” pocket type cut. I switched to a 1/2" long 1/4" bit.

The third process was using a 90° V-bit to make the hatch pattern.
For this the XYZ origin was at the “V” at the front of the flat side near the taper.
The pattern was almost perfect. The diamonds are almost “continuous” around the sides.

The final process was using a 1/32" bit to carve out the name.

I messed up on the first attempt at the first step by not having a long enough bit and forgetting that I would not have had a flat aligned with the index holes. So the first run was a learning process. 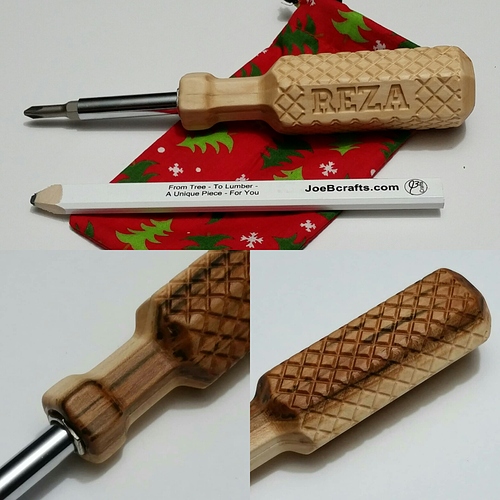 Putting the x-carve through its paces with a large carve.
There is variation in depth of cut but I think it is primarily due to the pine boards that make up this tray not being perfectly flat.

I marked the corners of the 20"x20" canvas on the board and jogged the gantry from corner to corner to make sure I had it lined up correctly.
I used the home location as 0,0 and set up G30 as centered on the board to make zeroing Z easy and heading to the first cut (somewhere on the P) a shorter travel. I still wish we could choose for the end of processes to NOT go back to 0,0. I’d rather be able to go to G30 or G28 as well as having more clearance than the default “safe travel” height of barely over the workpiece. I get nervous every time the bit gets just barely above the work piece and then speeds across to somewhere. I have my hand ready to smash the emergency stop button. 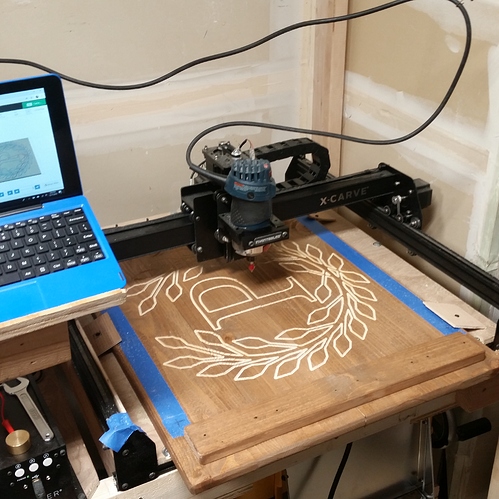 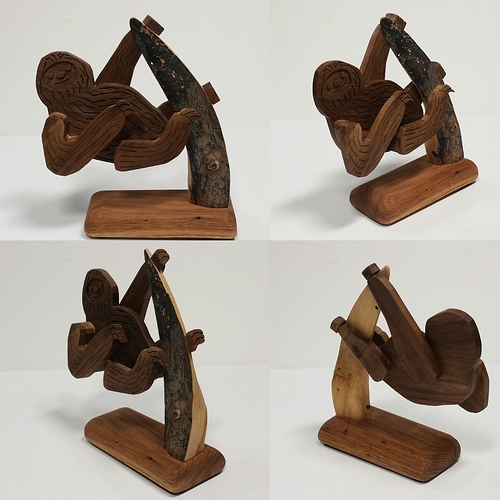 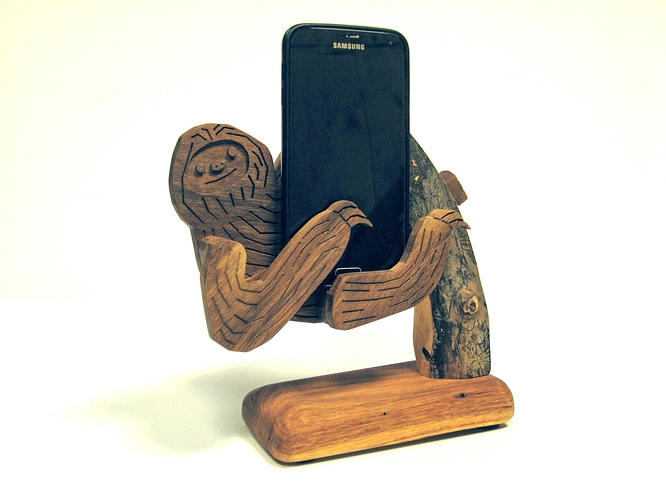 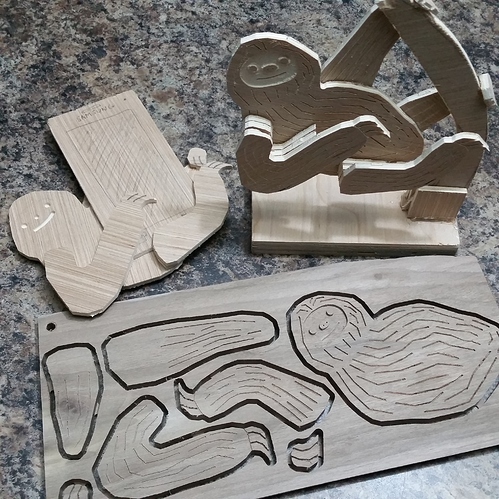 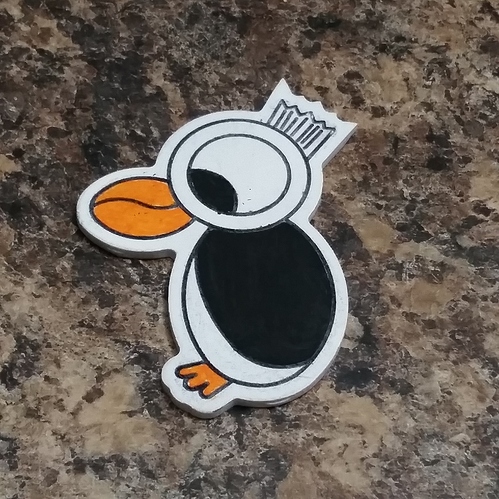 Pango Penguin, the cartoon character I drew as a kid, is now a fridge magnet.

He is made from expanded PVC. I purchased a 96x48 sheet of 3mm and paid the little bit extra to have it cut into (4) 24x12. I got it at Regal Plastic Indy location. They stock white and black there. The Kansas City location has the rest of the 3mm available colors. 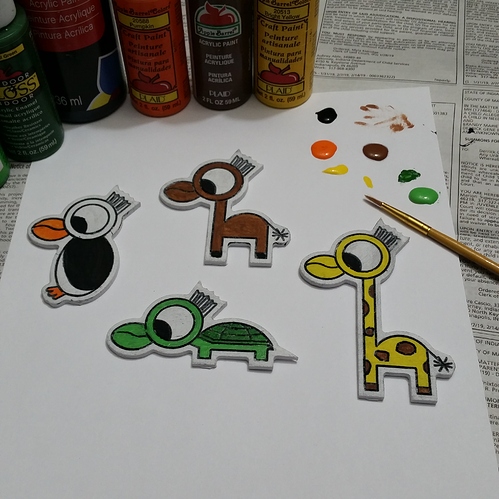 Just enough room under the Z axis assembly to do this one.
Makes me nervous every time I cut something that has large solid bit/machine breaking things just outside the project area. 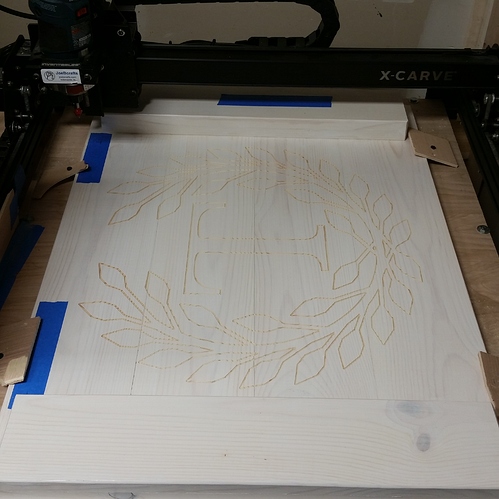 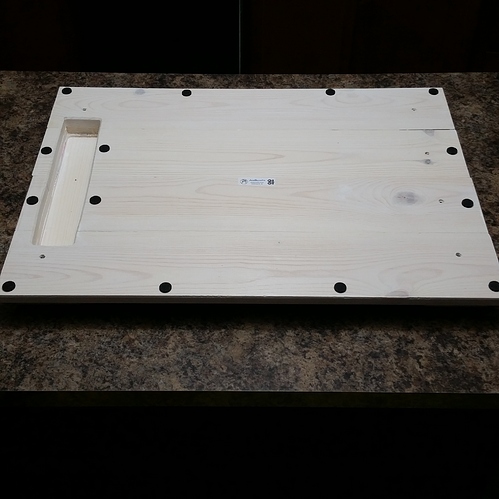 Have been making some flowers to hang on the wall
Grabbed a flower picture, attached it in AutoCAD, traced with polylines, exported as DXF, imported into Easel, downloaded G-code, G-code uploaded to xyzbot to optimize and reduce travel time, that G-code opened in notepad++ to change case and remove trip to (0,0), g-code file uploaded into Easel.

Would love to not need the optimizer step but I’d rather spend a couple minutes to save 15 or more.

The Easel g-code “order of operations” and logic needs some attention.

18 Likes, 0 Comments - Joe Becker (@joebcrafts) on Instagram: “Another flower and this one is a purple chrysanthemum. Perhaps a mum for your mom? Size is…”

A wedding sign that required splitting the design for two different carvings.
Carefully relocated zero and lined the board back up for the second half and was within a 1/16" of perfect. 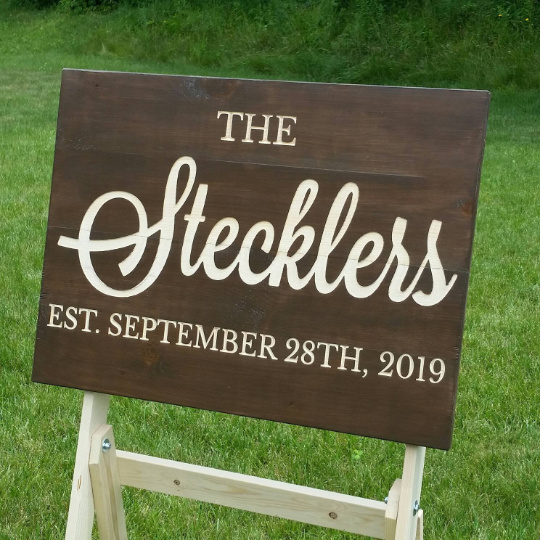 I have the 750 and the sign is 30x22. I designed the carve in Easel and made workpiece copies that used a rectangle to blank off what I didn’t want carved in each step. Also switched between a 90° v-bit for the small text and 1/4" two flute for the large text. 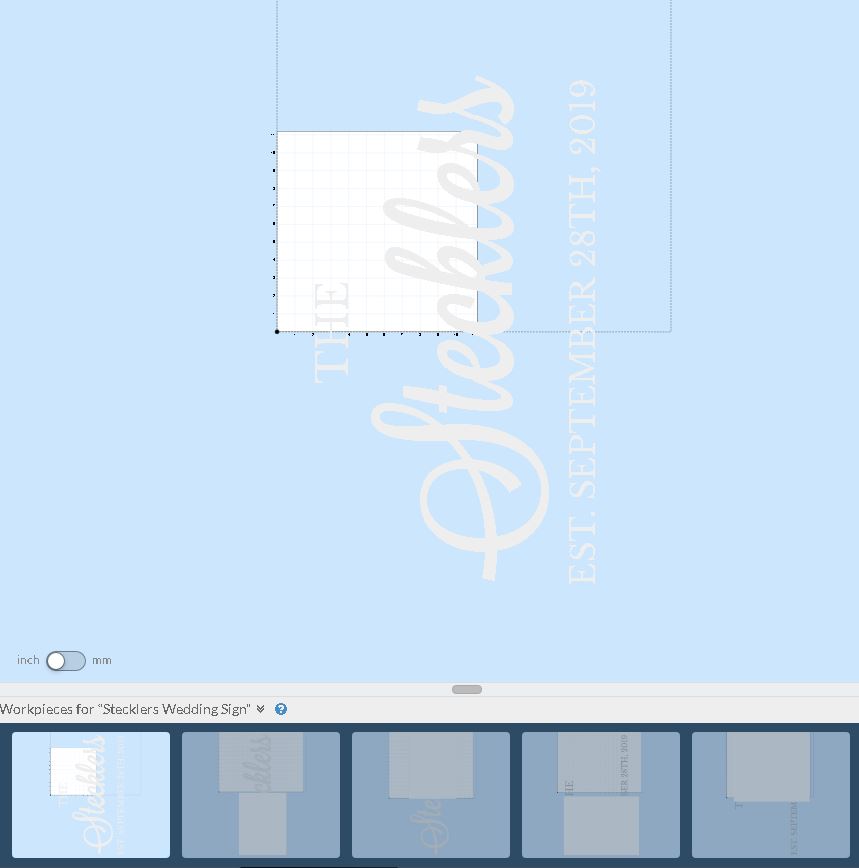 My first inlay.
Ash wood carved with an 1/8" 2 flute bit. Pocket for the heart and cut through for the magnet.
Cherry wood for the heart inlay. Used the inlay generator with a 0.05 tolerance. 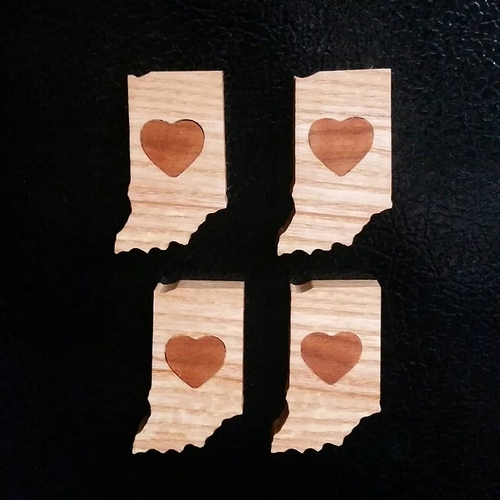 Have upgraded my x-carve with TBD CNC risers and z-axis gear change.
I then changed out the z-axis mounting plate and added my own stiffening. CNC router lift is complete. Raised and stiffened with parts from @tbdcnc and...