Is there a way to jog by number values?

I know that I can jog using the arrows on the UI, and if I look at the interval value I can determine how far I’m jogging, but it would be really nice to be able to say “jog x by ___, jog y by ___”.

I’d really like it if after homing the machine I could move the head all of the way up on the waste board past the grid to set the origin point at a specific spot. That way when the cut ends the head would move all of the way out of the way, it would also mean I could have a precisely set and repeatable origin.

Like I said, I know I can do this manually with the jog controls, but if there was a way for me to home the machine and then handle it via number value inputs it would be way easier. Is that possible??

You should be able to type in the incrament amount that you want to move.
Research and learn to use g28 and g30 commands

That’s good to know that I can. I’ll look into those g-codes.

My questions is where in the UI can I type that in? 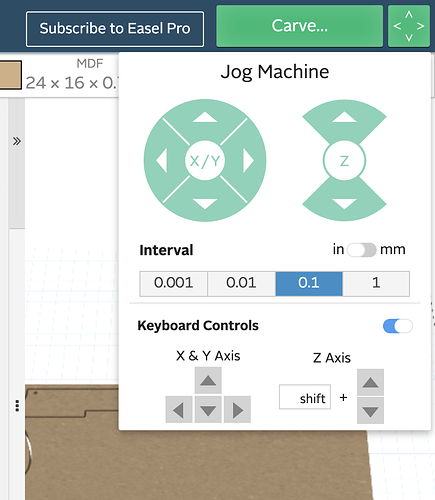 When I open the jog controls, I don’t see a place where I can type in the increment amount.

Well, It seems that Easel has changed since I last used it. There used to be a field you could type into, now what you are showing is not user friendly. What browser are you using?
That would be another good reason that I moved away from it.

His screenshot indicates he’s has hit the carve button but his UI is not as I remember. That is why I asked about browser being used.

When I click the green arrow button to the right of “Carve”, I get that “Jog Machine” UI.
However, if I click “Carve” instead, a slightly different UI pop up which allow a custom jog value to be entered.

As far as I remember, the “Jog by X Amount” has never been on the little “Jog” Pop-Up menu; it has only ever been on the “Carve” Pop-Up. If my memory serves me correctly, I do believe I commented on that fact in the thread where Inventables announced the new “Jog” Pop-Up window feature.

Sorry, just seeing all of the replies.

Yeah, with the regular jog controls before you click carve you don’t get the input for changing the jog interval to an arbitrary number. 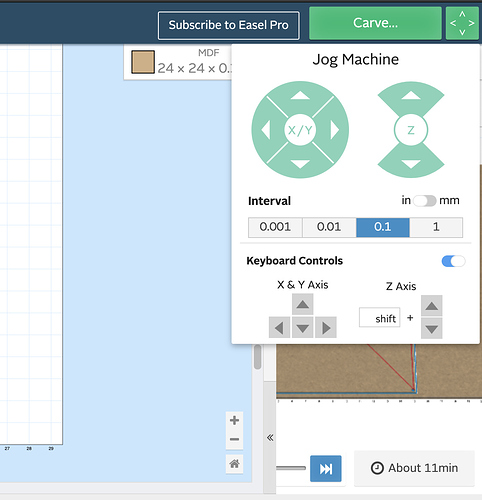 But now I see the input field when using the carve button: 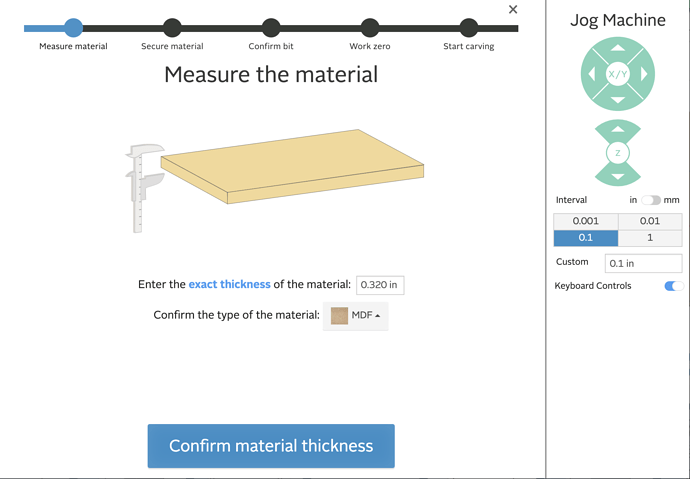 Didn’t realize it was there before, must have overlooked it.

It would be nice to have that field in the regular jog controls, but it’s def good to know it’s there in carve.