I just got the kit delivered. I started the assembly and i am confused as to how many Eccentric Spacers (25195-07) are needed for X-axis?

This guide tells i need 4. But shows only two of them assembled.
http://x-carve-instructions.inventables.com/1000mm/step2b/4adjustablevwheels

I think its actually 4. Two on each side. In the final assembled picture, only 2 are visible. That’s what confused me.

Now out 4 of pulleys, only one came with set screws. Rest of them are empty. not sure where to get them.

I didnt order the stock steppers. I got 269oz-in steppers from amazon. So, had ordered the pulleys separately from inventables. Will try homedepot today.

Thanks, I live in San Francisco bay area.

i haven’t seen one around here. There is a Dale hardware. they might have.

Assembled the machine without the waste board. Just clamped a piece of plywood to act as waste board and tried a carve. It worked perfectly. I initially thought the z-axis cut is too deep. but when I measured with ruler, it was correct.

I also tried to use Raspberry Pi instead of my PC. that worked well too.
Instead of connecting the Arduino to my PC, I connected it to a Raspberry PI 3. In Pi, I was able to open the browser, go to easel site, open my project and carve. The test carve went well.

One thing i did differently is that all controller components (Arduino & Stepper drivers) are mounted along X-Axis beam. They all move along with x-axis. I now plan to mount Raspberry Pi next to Arduino.

Here is the pic when I was carving in the air. 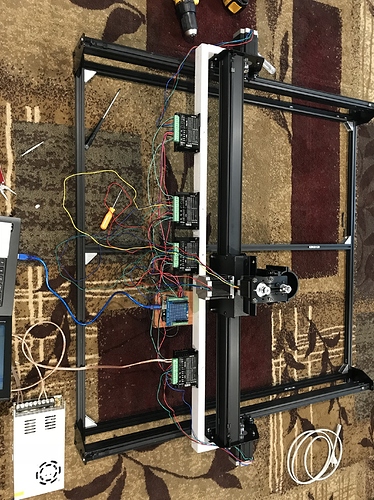 Thanks for all your help.

Now I need to learn Easel.

this keeps the wires that travel (in the drag chain) to a minimum. had seen this on OX build (openbuilds) and liked it.

Not sure if this is good or bad in the long run.

Has anyone tried auto switch off of 24v power to the drivers after the carving is complete?

I see the motors make noise and consume power even when not carving. trying to see if i can switch it on/off automatically with a relay.

Is that because when we move by hand, steppers generate power and that could damage the drivers? Once I have the table for it, I’ll have a kill switch to turn off everything.

Here is the whole setup with Pi and a successful carve. 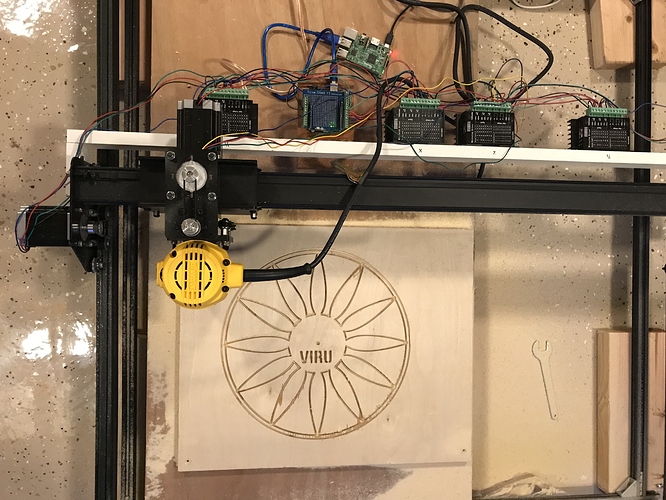