I have been using XCarve since January 2017 and done several smaller projects, In this project I used several software projects including Easel to cut the clock wheels and do the inlay work. Other software that i used was Delta CAD, Fusion 360, Gearotic 3.x. Create GCode files and used Easel to drive my XCarve. 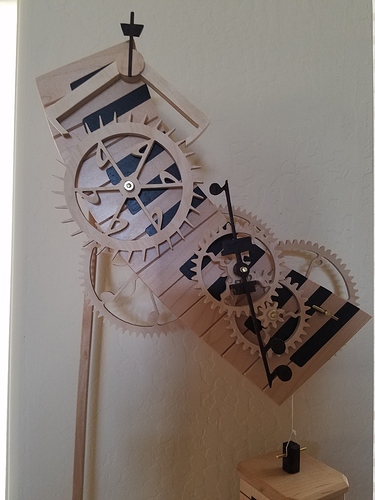 The weight with inlayed keys: 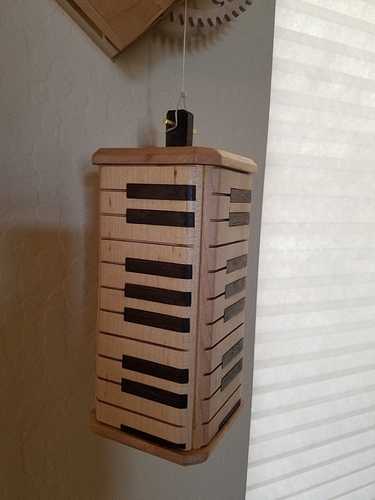 The pendulum with inlayed notes: 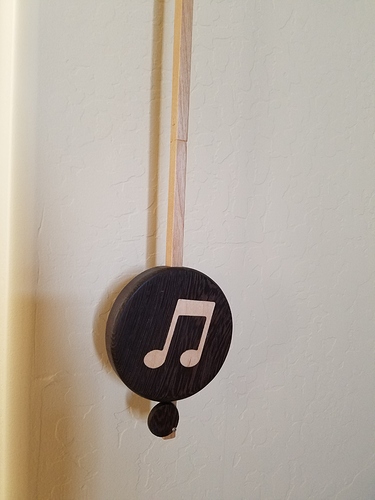 This is a movie of the clock. Paste the following URL into your browser address bar.
YouTube video of the clock

I have made 6 wood gear clocks so far, but this is the first that I used a CNC router. In fact, it kind of saved the day. I was sanding the Wind Wheel using a disc sander the wheel got caught and sanded off the tip of several teeth. I said to myself, no problem, I will just cut another one!

That is spectacular!!! I make wooden gear clocks also. It becomes an addiction. Once again, that looks great!!!

Where do you get the plans for the clocks?

Inspirational!!! There are some projects on here that make you want to get better and try new things. This has been added to my list.

Thanks everyone for the most positive comments!

I fixed the movie link the first post to be a youtube video. (all new to me:slight_smile:)

That really turned out great

Does it work using a motor?

This is clock really old school. Not only does it have only wood gears, there is no motor, no batteries, and no USB connector used. Gravity does all the work! The 2nd picture above is a keyboard-shaped container that weighs 5 pounds. I made a winding key and wind the weight UP every 2 days. Really really old school!

A good source for clock plans is Clayton Boyer, master clockmaker. You can tell him I sent you. Click the following link.
Clock Plans by Clayton Boyer

Thank you for responding. I’ll take a look

This is stunning! I can’t believe there is nothing powering it except for a winding key and gravity.

TOTALLY UNREAL! Thank you for sharing this project and the video!

nice. i need to gewt back on to making the clock i started…cut the stuff out but wasnt happy with it, just gotta re do it and figure out how to assemble it all. i was having some issues interpreting his instructions

I’m new here, where would I go to see the schematics of the parts?

There are no schematics. This is someones personal design.

So you guys only share pictures and videos of the projects?
I was expecting some easel project attachment.

You hit the nail on the head for this project. This was a custom design using many tools which included my xcarve. I do have couple of easel projects for the inlays. But the wheels were developed in Fusion 360 with generated gcode. I imported gcode in easel as needed. I used one easel project that part. The frame and several other part were drawn in Delta CAD, printed on paper, then cut with a scroll saw and drilled with a drill press. I also needed to cut and polish brass rod. Fussed around a lot to get it to tick. Sand and finish.

My goal was to use my xcarve in building a clock. I am happy with the contribution made by xcarve. I could make the fusion and easel projects available. I will look for input from the forum.