Laser and spindle both permanently attached?

Is there anyway to have the spindle and a laser both permanently attached to the machine. I was thinking of doing 3d relief carvings than use the laser to shade and detail the carving. The software is out there. I should be able to just measure the offset of the laser beam and feed that info to the machine so,it knows the diffrences between homes. Hmmm. Any input would be appreciated

Presumably one could used the drilled and tapped holes in the aluminum spindle mount for this — I’d be concerned about exposing the laser to the rigors of routing and the dust, and would want to clean things thoroughly before using the laser so as to minimize the fire hazard.

Yea I thought of making a 3d printed cover for the laser that keeps the dust out till it’s ready to go. In more concerned about conectiins to the board

On some of the tutorials I have seen for adding a laser diode to 3d printers they just put in a toggle switch to switch the control lines form the cooling fan to the laser driver.
I imagine you could do the same with the spindle speed control?

Some version of grbl supports a command do,eboth laser and cnc. You change some thing in the gcode I’d have to read again. The toggle switch I’m sure could work out but it seems like there would be some way to hook both up to the shield. I saw some software that uses the contours of the carve to keep the laser level by moving the z.

Seems like that’s an awful lot of vibration, dust and particulate matter flying around, really close to delicate electronics and optics… Don’t know, I’d just be hesitant myself.

Yea I knew I was in trouble when my,wife said the same thing as you

You can flash the arduino uno to do both cnc and laser (at least the one from j-tec unsure about others), but it takes some space so the limit switch has been removed from the programme.
As for keeping the laser and spindle on all the time ,as others have said not a great idea but the x-carve has three bolt holes for other stuff so a permanent platform with a plug for power on it. for the laser to simply plug into might be possible. The laser can then be removed after each use. This would not take any longer than changing a bit in the spindle .

I am now enjoying the jtech laser while using the picengrave software! The grbl 0.9j appears to be the trick for the x-carve system. I suspect someone smarter than me can make the Jtech grbl 0.9g work but it was alluding me and the machine wasn’t playing well. The new 0.9j on github works well for the system.

Oh the things we can do with this machine! Love it! 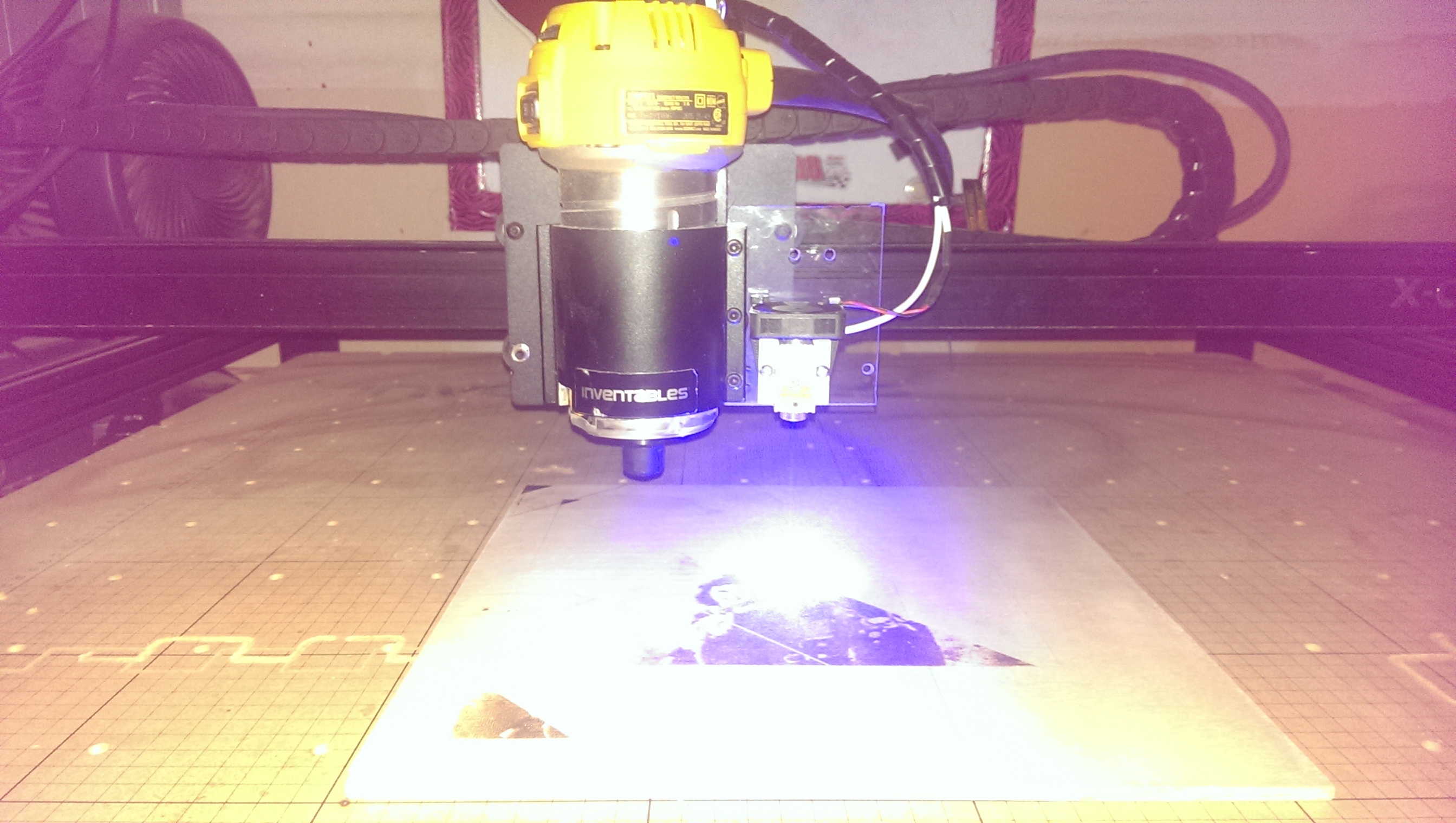 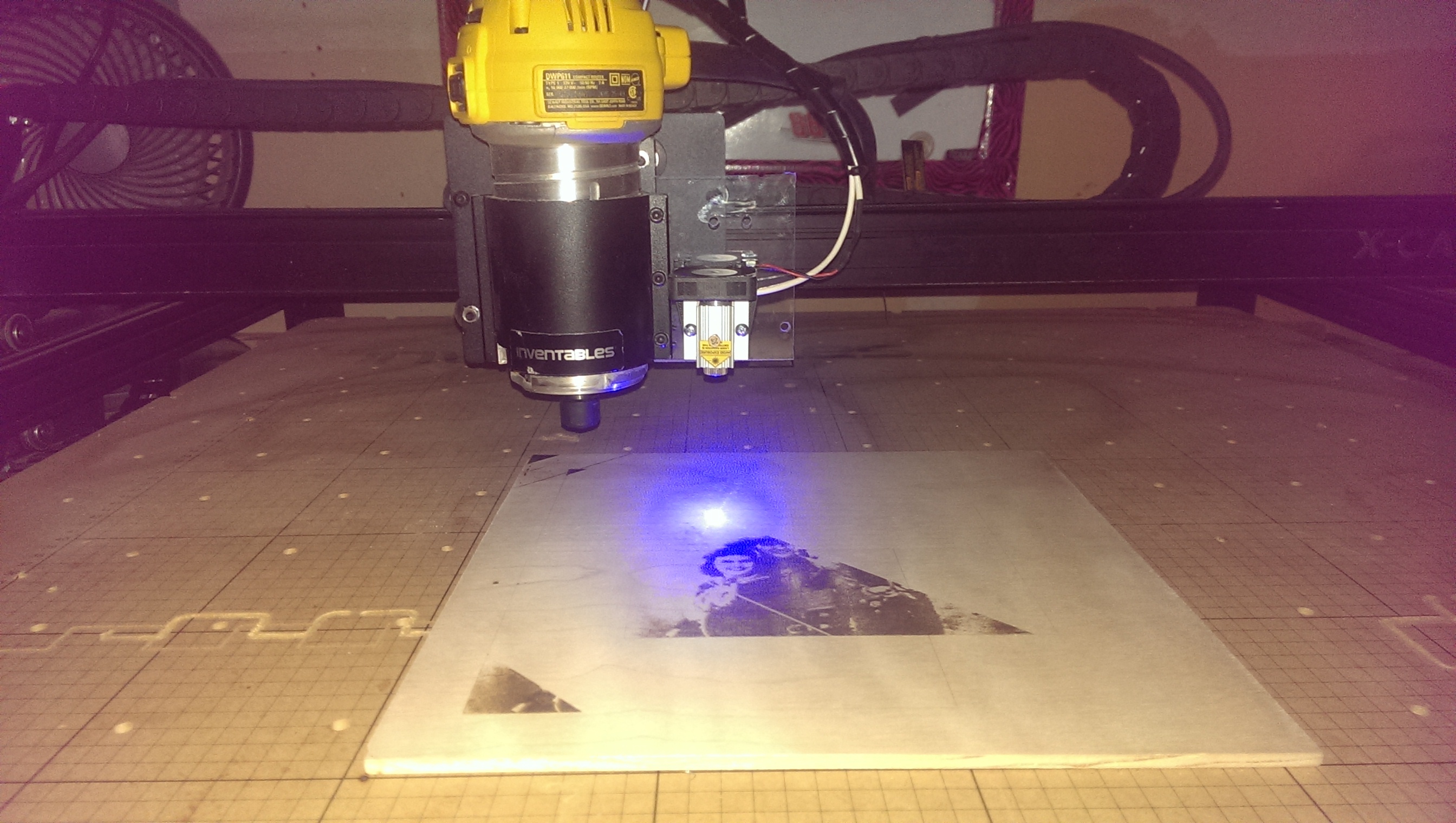 Dang, now that’s cool! Any trouble with dust from the router? Mine puts bits, pieces, chunks and fuzzies everywhere.

Yes, the router is a new addition to the set up and it does spit out pieces everywhere. I have used this set up with the vacuum cleaner hose attached via zip ties which helped with the quiet spindle. I haven’t tried with the dewalt router yet.

The DeWalt is about a billion times messier, thanks to the downdraft air system. Works AWESOME, but boy does it make a mess! My shop vac has a hard time getting the chips before they’re thrown clear, although it does a fair job with finer dust.

Can you tell me more information about which laser/kit you purchased? I am looking to add a laser to my x-carve as well, but am not sure what to purchase. I was looking at some of the Jtech kits like: Our MOST popular kit EVER!  2.8W laser with our 2.5amp driver. Engrave on wood, leather, acrylics, and many other materials Cut thin and non dense woods like Balsa, Basswood, and thin plywood! Cut many types of foam and plastics!...

But, I am not sure what all is needed in order to set this up. Any help you can provide would be amazing.

It is now quite easy (in my opinion). If you buy the laser kit, download the grbl 0.9i from github, remove the wires for the spindle logic and replace with the laser control board wires, and use a software that controls the spindle pwm you can get a lot of capability out of the equipment. the Easel program works and you can also turn the laser on and let the machine conduct the movements. The Picengrave.com software works very well with the system and does the laser control and movement of the machine.

Previously the requirement was to use the Jtech 0.9g grbl which I was unable to make work on my x-carve. Now with the 0.9i there is no need to change grbl- bonus!

Thanks for the information.

Do you suggest 2w or is the 2.8w worth the extra money?

I had a chance to work with a 60w co2 laser in the past which spoiled me a bit so I can only guess that since 2.8 is closer to 60 than 2 it must be better…so that is sarcasm at its best and my only way to jokingly say that I am not sure if it is worth the value of the upgrade. I am still learning how to use the laser and the x-carve in general.
I went for the upgrade right away and followed up with the upgraded software right away also. I was in a good position to do the upgrades with some other projects that I sold. Now I just need to sell a bunch of stuff to get to the vectric aspire…$1900…ufdah!

We are working on a new 450nm laser diode build on our Shapeoko 2 that is 6W. We are hoping to achieve deeper 3D engraving depths and speed up the engraving process. Stay tuned for more details in the next few of days. We are also working on some new features in PicSender, so keep and eye out for a version change on our web site to download the update.

Awesome! I would be interested in a feature in the software that would allow the system to do both vector lines and raster. For example laser etch the photo and conduct deeper cuts into areas that indicate to cut deeper like words or edges.

if that is already available, I don’t understand your software well enough yet.

on another note, what would be the price point for the 6w and would Jtech’s board be able to control it?

Thanks for the info!

PicEngrave can already do what your describing, but with raster gcode not vector. Shades determine the laser’s power and our Feed Rate change can give you more control if it’s going to engrave shades or cut into the wood. You can do a Border or Ellipse around the shaded photo.The settings will let you control the width, laser power and feedrate and if set correctly, it will cut into the wood in those areas. There is also Skip White background to optimize the gcode to save on engraving time.

The J-Tech driver is 2.5a max and the 6W diode requires 4a max. This is a custom build and we are still working on it.