I know there was a lot of “fear” stirred up over some guy releasing the plans to 3D-print a pistol. I know I have been asked to make some parts (or “modify” some parts) that I suspected were gun parts in my “backyard shop.” Now, I’m not anti-gun; I think EVERY STATE should make up whatever gun laws they deem appropriate. I’m NOT going to debate it either way! (this is not the forum for a debate on gun control)

Couple that with the fact that there are definitely “patented” or “copyrighted” products that I can “manufacture” (even without an X-Carve), but CNC routers, mills and lathes make doing so EXTREMELY EASY for anyone! (I mean, who hasn’t considered “milling out” their favorite sports team’s logo on something?? Technically, that is a copyright violation.)

I understand the capacities of my own equipment and with America’s tendency to blame societal problems on inanimate objects rather then the irresponsible use of them by individuals, my question is: how long before the govt starts to “regulate” the “maker” world? How long before one needs some sort of license to own “CNC” machines? Could 3D printers be outlawed one day? Will the X-Carve get you “10-20” in a state prison one day?

As the ease of use increases, as the accuracy increases and as the price comes DOWN, I can see people with less than honest motives doing the “wrong” things! Then, we, the “inventors,” could pay the price…

We still use cutlery, but the potential for knife crime during meals !!!

We can carry and use matches, so we are all potential arsonists.

The media has way too much influence over things than it should. No one complains about the global pollution and damage a war makes, that would just be bad press, but hey drop a plastic wrapper…

You have a couple different points in here.

Copyright law comes up a lot in the crafting world. My wife tells me all the time about issues such as that. I won’t profess to be an expert on copyright law, but generally speaking, if you want to use a company logo to make something for yourself, you can do that. What you can NOT do is use a company’s logo to make something which you in turn sell. Patents typically cover something very specific. If a gun part is patented, and someone asks you to modify it, I believe you are generally outside of the protection of the patent once you deviate from exactly what is spelled out in that patent. Companies are built around aftermarket car parts. They wouldn’t exist if they were violating patents every time they made an aftermarket head light or tail light.

the only real issue is if you were to sell said item with sports team logo on it. and even then the law gets tricky. i doubt they really care if some guy in his garage makes a few wooden things with the logo on it and sells them on etsy. but if that same guy were to make and sell 100,000 of them im sure there would be an issue

In my world, I know of a person that was taken to task by corporate lawyers (auto maker) for selling a “small” quantity of items with their trademarks on them. YMMV

Yeah, big brands can and often do protect themselves on Etsy. Right now, it seems like IP/trademark infringement is a very hot topic there. Sure, people will get away with it for a while…but if you want to do a real business and not get sued into oblivion, staying away from IP stuff (for sale) is a good idea.

I made a Mets logo piece…but for a friend, for free, just to play with the machine. MLB would sue my butt into easy bankruptcy if I tried to sell it online.

Certain big companies are more strict than others when it comes to enforcing their rights. Fox is notoriously strict for paying people to comb Etsy and send C&D orders. Rumors abound about Disney being strict, but I think they are mostly just rumors. Watch out for Taylor Swift…she wants to get rich on law suits alone! From a legal standpoint, they own it, so don’t do it. From a “lets be real” standpoint, it’s going to happen We’re going to make things with brand logos on it. And again, if it’s for yourself, it’s ok. If you make it and give it away, it’s ok. A few items for sale on a table at a craft fair will even get by. But the minute you put it online for sale, your exposure increases. You can play with keywords to reduce your exposure (i.e. instead of “Mickey Mouse” you say “mouse inspired”). But in the age of image recognition searches, you still have to be careful. They don’t care that you might make $3. What they care about is maintaining their high-quality brand image, so they WILL take action. Unless you continue to do what they tell you not to, action generally stops with the C&D order. Actual law suits aren’t that common because it costs them a lot of money.

Unless for some reason (like a chemical imbalance) you believe you are being watched all the time.

In THAT case you might want to do a trademark search on everything you carve… or say. Otherwise, I think Mr. Wolf nailed it.

TBH, I am not really that concerned about violating copyright law. I realize that I cannot fill Ebay with Mickey Mouse or NY Yankees stuff. I have a feeling it will be a giant head-ache for Disney, MLB, etc. in the future as programs like “Easel” make it easier to replicate their logos.

I think I under-emphasised the fact that there are PLENTY of people in this forum who have a very good understanding of “mini-manufacturing,” electronics and can probably write code for “android apps,” and Arduinos… I, too, have had some mild success in these things! I have no doubt that I CAN make a drone that flies, identifies a target, and can shoot. 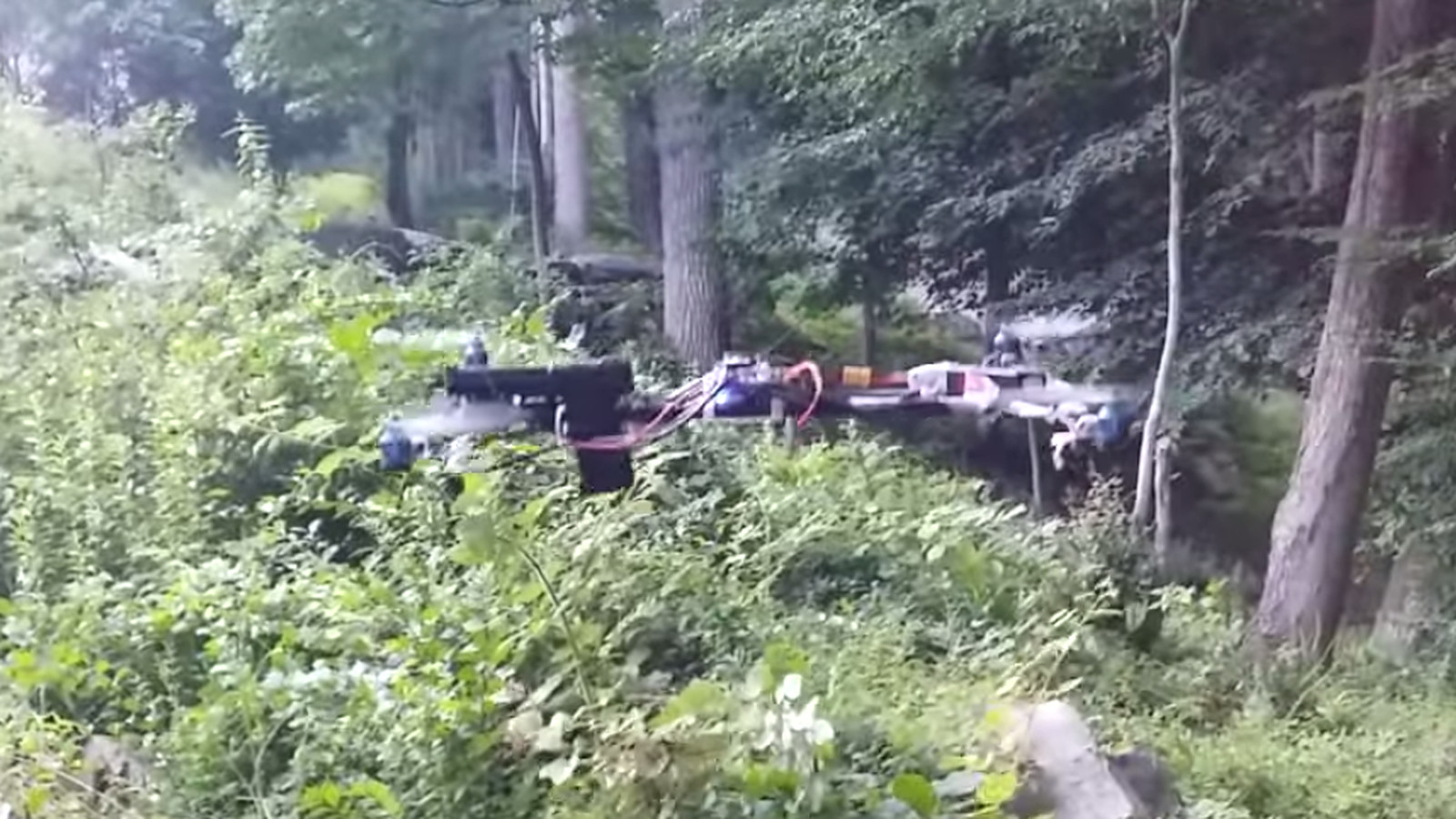 This isn't the first video we've seen of a firearm attached to a consumer-grade drone, but it is the most convincing. The 14-second clip, uploaded to YouTube last Friday, claims to show a "homemade...

Since the govt won’t stop a 1/2-motivated, freak-boy from buying a course on Udemy.com, it could limit the freak-boy from access to CNC controlled equipment or, more directly, the Arduino-type controllers.

Yeah, it sounds ridiculous TODAY… but If they can ban toilets that use more than 1.5 gallons per flush or incandescent light bulbs…