Well, I just learned the hard way (of course) that you should always re-home if you shut off the software (Easel). 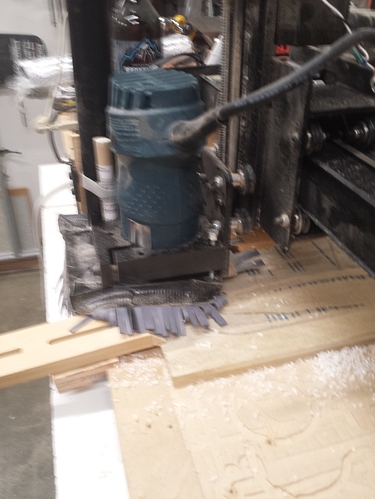 I closed the web browser, but didn’t move the machine. When I started it up again to do the second part of the carve I unlocked without homing and used the “last position” feature and it plunged the router/bit straight in.

By the time I stopped the machine, it had burrowed the collet nut at least 1/4" into the acrylic sheet, annealing it. Took a lot of effort to break it free without damaging anything. Fortunately, it only cost me a 3/16 bit.

Do I get any points for the posthole I dug through my wasteboard? I mean, talk about being nuts deep in plastic! Literately!

Pretty sure that Easel doesn’t use a coordinate system that is saved so no, it would have been lost.

I’m thinking the work zero is saved in the controller (if not powered down). I could be wrong. And is based off of current machine zero.

I didn’t re-probe. But the post hole is at the work zero. Hmmmm.

Some are persistent across power (written to EEPROM): G54, G55, etc.

My comment was intended to be that I think Easel uses the G92 coordinate system which is NOT saved across power cycles or connects/disconnects (per the GRBL wiki).

I know it’s not Easel and it’s Arduino/GRBL.

And yes, all are relative to Machine zero which needs to be set with a homing cycle.

So I made this mistake. Did a roughing cut and easel wasn’t responding so i closed it and opened a new window. before setting up my finishing carve. is there any way to save the carve? I originally picked a random spot for work zero.

can i home the machine and then press use last zero and be ok?

I can confirm in easel it does work. The z is slightly off. I did re probe. But that is it everything else is lined up.