Made this as a gift for a local daycare…Growing up in a rough household Calvin and Hobbes was my escape when I was younger, the boy who made up the rules as he went along and his stuffed Tiger…

This was a fun one to see come to life. 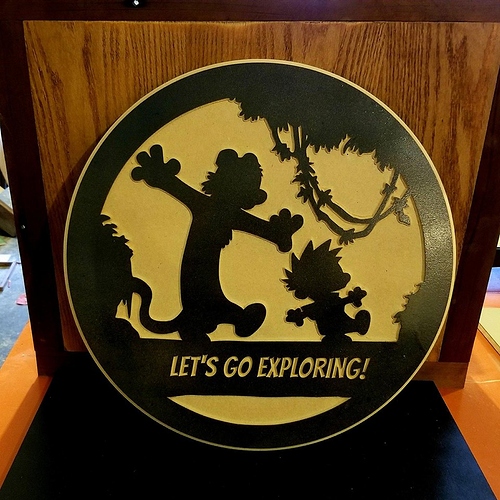 Awesome job. What material is that? This done also with the new screwdrive system? You like it too?

And yes this was done on the screwdrive system.

Love it.
I have a grandson named Calvin.

I love watching projects come to life. Thanks Lance.

Looks sweet, how long did it take you?

I must have missed something - What is the new screwdrive system?

Very Nice work, Sorry forgot to include that in my reply. Always been a fan of Calvin and Hobbes! And a fan of bigger projects…

upgrade from the belt system…take a look around the forums

I Just finally set up my xcarve and im seeing everyone posting about the same named projects is there a general location for shared files?

Thanks Lance, I just broke two belts over the weekend, was going to upgrade to 9mm. But now I’ll have to reconsider…

there are so many ppl breaking belts lately, I wonder if Inventables received a bad batch from the supplier or something…The reason I broke belts was because I ran my carves well beyond the normal settings, and I put too much stress on the belts…but people who have barely had their machines for a month are snapping belts, unless they are over tightening the belts on their machines and not using a hanging fish weight scale to measure the tension in their belts…

The upgrade was over 500 bucks but for me, it was worth it…I’m not just doing this as a hobby so I needed faster and more accurate to make money

@LanceCameron when you say ‘faster’ does the screwdrive allow you to run at faster speeds?

Thanks for the fish weight idea to measure belt tension. I’ve been using the tighten to sound like a low ‘E’ note.

My last two broke in the middle of one project and the second broke at the end of a 3hour cut and over course screwed the whole piece of wood. Seems my woodworking scrap pile just keep growing, I might not have to split wood next winter…

It allows more aggressive cuts but at a tradeoff of max speed. Overall cut time is much less since it requires less passes.
.01 doc vs .1. And depending on the material possibly even the same IPM.

when you say ‘faster’ does the screwdrive allow you to run at faster speeds?

It comes down to machine rigidity and material removal rates (MRR)
With higher rigidity on can go deeper per pass therefore increasing the MRR rate. The other benefit is that you dont just use the cutter tip only, but also more of the cutter lenth (height of bit) With proper chip load / chip thickness the bits last longer.

IIRC the Xcarve is 25mm/motor turn, the ACME is 8mm/motor turn so there is an increase in resolution/accuracy/torque, traded for all out speed.

@HaldorLonningdal Thank you for the clarification. Makes sense regarding the MRR, using more of the cutter and increase in resolution/accuracy/torque. With more MRR i can see how you can slowdown and still get more done.

I’m not familiar with IIRC nor the default rapids. What do they mean?

Again thank you for the clarification.